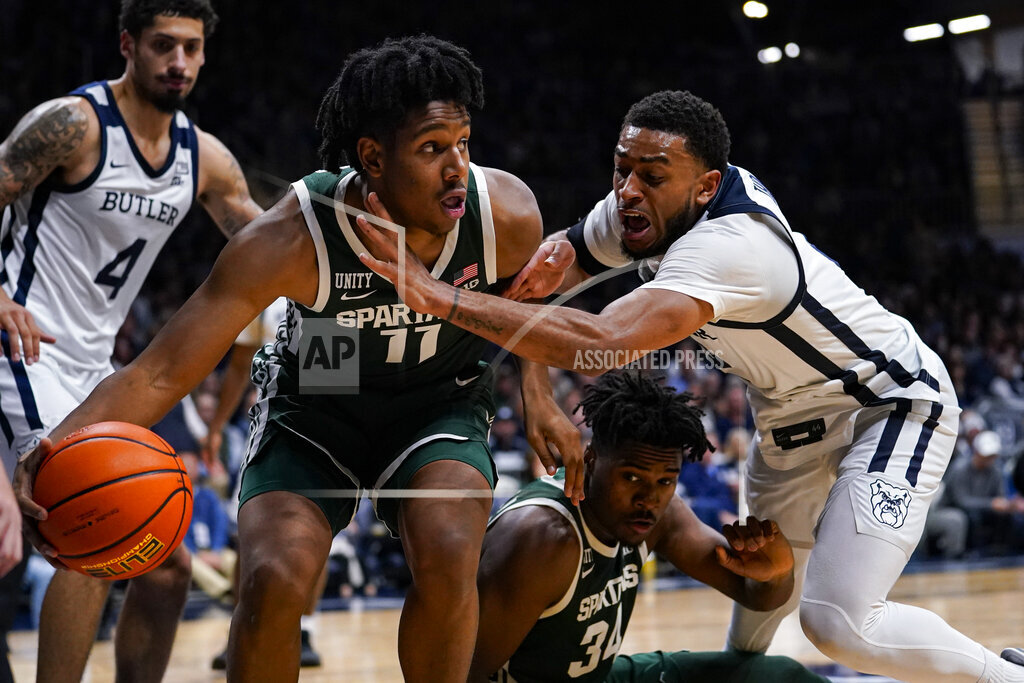 Michigan State 73, Butler 52 – Brown, Christie lead Michigan State past Butler 73-52
Gabe Brown scored 19 points, freshman Max Christie added 18 and Michigan State beat Butler 73-52 in the Gavitt Tipoff. Michigan State jumped out to a 22-8 lead behind nine points from Christie. A 10-0 run, opened and closed by Christie, early in the second half made it 44-28 and the Spartans led by double figures the rest of the way. Marcus Bingham Jr. chipped in with 10 points and six blocks for Michigan State. Ty Groce had 15 points and eight rebounds, and Chuck Harris added 13 points for Butler.

Blackhawks 4, Kraken 2 – Blackhawks beat Kraken 4-2 for fourth straight win
Patrick Kane and Alex DeBrincat each had a goal and an assist and the Chicago Blackhawks beat the Seattle Kraken 4-2 for their fourth straight win. Seth Jones also scored to extend his points streak to seven games and Jake McCabe added an empty-netter for the Blackhawks to seal the win. Marc-Andre Fleury stopped 31 shots, including 16 in the second period. Jared McCann and Yanni Gourde scored in the third period for Seattle, and Philipp Grubauer finished with 15 saves. The Kraken have lost five straight and seven of eight.

Pistons 97, Pacers 89 – Grant, Joseph lead Pistons to 97-89 comeback win over Pacers
Jeremi Grant scored 19 points and Cory Joseph added 18 as the Detroit Pistons rallied to beat the Indiana Pacers 97-89. Cade Cunningham added 16 points for Detroit, and Saddiq Bey scored 15. Malcolm Brogdan had 19 points for Indiana. Caris LeVert scored 18, and Domantas Sabonis finished with 15 points and 10 rebounds. Both teams shot below 43% from the floor and under 30% on 3-pointers.

Blazers 112, Bulls 107 – Lillard rallies Blazers to 112-107 victory over Bulls
Damian Lillard struggled at the start but warmed up to finish with 22 points and 10 assists, rallying the Portland Trail Blazers to a 112-107 victory over the Chicago Bulls. Jusuf Nurkic added 18 points and 12 rebounds for the Blazers, who trailed by 20 in the first half. Zach LaVine had 30 points and DeMar DeRozan added 22 for the Bulls, who had won four of their previous five.

CMU 37, Ball State 17 – Nichols tops 2K yards in C. Michigan win over Ball St.
Lew Nichols III ran for three scores and 219 yards and Central Michigan piled up 567 yards of offense and beat Ball State 37-17. Nichols topped 2,000-career rushing yards when he ran for 131 yards in the first half against the Cardinals. Nichols scored on runs of 2 and 66 yards sandwiched around a 43-yard end-around by Kalil Pempleton. Just before halftime, Drew Plitt led a 14-play, 81-yard drive for Ball State that ended with a 6-yard scoring pass to Yo’Heinz Tyler which reduced the Cardinals’ deficit to 28-17. Central Michigan put it out of reach when Nichols carried it in from the 1 finishing an eight-play, 55-yard drive.

NFL – Lions QB Jared Goff sits out practice with oblique injury
The Detroit Lions held out Jared Goff from practice after the starting quarterback suffered an oblique injury in last week’s game against the Pittsburgh Steelers. His absence raises questions about his availability for Sunday’s against the Cleveland Browns.  Goff, who said he was more sore than expected this week, ended up finishing Sunday’s game, which was a 16-16 tie. The Lions quarterback was only able to complete 14 of 25 passes for 114 yards. On Wednesday, he admitted the injury affected his throwing motion against the Steelers.

NFL – NFL updates COVID-19 protocols ahead of Thanksgiving
The NFL is requiring players and staff to wear masks inside team facilities regardless of vaccination status for a week starting on Thanksgiving, and they must be tested twice for COVID-19 after the holiday. The league’s protocols were updated as a result of increasing rates of COVID-19 across the country. Green Bay Packers quarterback Aaron Rodgers and Pittsburgh Steelers QB Ben Roethlisberger each missed a game in consecutive weeks because of COVID-19. Also, the league is encouraging teams to offer drive-through COVID-19 testing for friends and family of players and staff if they’re visiting or staying with them for Thanksgiving.

MLB – Verlander agrees to $25M, 1-year deal with Astros
Justin Verlander has agreed to a $25 million, one-year contract with the Houston Astros that includes a conditional $25 million player option for a second season. Verlander became a free agent after completing a $94 million, three-year contract with the Astros. He played just one game in the past two seasons after injuring his elbow in the 2020 season opener. Verlander had Tommy John surgery in October 2020 and said earlier this year that his rehabilitation was going well.

MLB – MLB owners meet amid labor negotiations with players’ union
New York Yankees owner Hal Steinbrenner said he voted for Major League Baseball’s proposal to lower the luxury tax threshold, a plan opposed by the players’ union with the sport on the brink of its first work stoppage on 26 years. The luxury tax, formally known as the competitive balance tax, had a threshold of $210 million this year. Owners proposed lowering it to $180 million and adding a $100 million payroll floor. The union long has opposed a floor, fearing it would lead to a hard cap.

Big 12 suspends Texas Tech radio announcers over comments
Texas Tech’s radio announcers have been suspended for a game by the Big 12 over comments about officiating in the Red Raiders’ 41-38 victory over Iowa State. The announcers have been publicly reprimanded by the conference and banned from calling Saturday’s home finale against No. 9 Oklahoma State. Several calls on reviews went against Texas Tech. One was an interception that was overturned near the goal line and prompted fans to throw objects on the field.

New baseball team with new name coming to Battle Creek
The Battle Creek Bombers baseball team is dissolving after 15 years and will be replaced by a new team with a new name. The Battle Creek Enquirer reports Wednesday that the franchise had been owned by the Northwoods League, but now will have local ownership. Former Bombers General Manager Brian Colopy has completed purchase of the team. The community and fans will choose the team’s new name. Fans can submit suggestions for the new name until 5 p.m. Tuesday. Fans also will be able to vote for a final list. The winning submission comes with season tickets — for life.