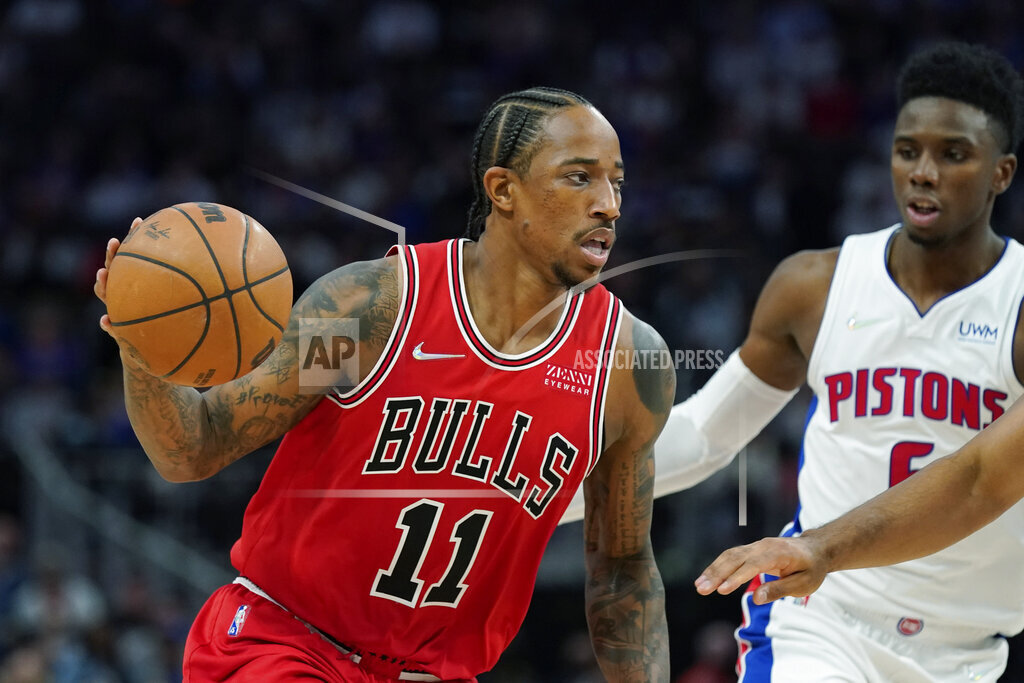 Bulls 94, Pistons 88 – LaVine scores 34 points, Bulls beat Pistons 94-88 in opener
Zach LaVine scored 15 of his 34 points in the third quarter, leading the Chicago Bulls to a 94-88 victory over the Detroit Pistons on Wednesday night in the opener for both teams. Detroit’s Jerami Grant was off on an 11-foot baseline jumper with 50 seconds left, missing a chance to tie it. The Bulls sealed the victory by making free throws. The Pistons were without rookie guard Cade Cunningham due to a sprained right ankle. DeMar DeRozan had 17 points, and Lonzo Ball had 12 points in their Bulls debut.

Hornets 123, Pacers 122 – Ball scores 31 to rally Hornets past Pacers 123-122
LaMelo Ball scored 31 points on seven 3-pointers, and the Charlotte Hornets used a 24-0 third-period run to battle back and stun the Indiana Pacers 123-122 on Wednesday night. Indiana led 122-121 on Torrey Craig’s foul shots with 12.7 left. P.J. Washington made two free throws with 4.6 seconds left before Domantas Sabonis’ miss from 11 feet sealed the Hornets’ win. Ball scored 12 points in the third-period run and nearly finished with a triple-double, ending with nine rebounds and seven assists. Sabonis scored 33 points, Malcolm Brogdon had 28, and Chris Duarte chipped in with 27 for Indiana.

Astros 9, Red Sox 1 – Astros’ Valdez goes 8, beats Red Sox 9-1 for 3-2 ALCS lead
Framber Valdez gave the Houston Astros the start they were looking for. The Astros lefty was perfect through four, took a two-hit shutout into the seventh and became the first pitcher in the 2021 postseason to finish eight innings on Wednesday. That helped Houston beat Boston 9-1 in Game 5 of the AL Championship Series. The Astros are one win from a second straight trip to the World Series. Yordan Alvarez had three hits and three RBIs for the Astros.

Braves 9, Dodgers 2 – Braves blast 4 HRs, beat Dodgers 9-2 for 3-1 lead in NLCS
Eddie Rosario homered twice in his second four-hit game of the NL Championship Series and six Atlanta pitchers combined on a four-hitter, giving the Braves a 9-2 victory over the Los Angeles Dodgers and a commanding 3-1 lead in their best-of-seven playoff. Rosario finished a double short of the cycle and knocked in four runs. Adam Duvall and Freddie Freeman also homered for the Braves. Game 5 is Thursday at Dodger Stadium.

NHL – Climate Pledge Arena ready to get Kraken for hockey debut
The home of Seattle’s new NHL team is about ready for its hockey debut on Saturday night when the Kraken host the Vancouver Canucks. The arena will have its first official event Friday night when Coldplay performs and it also hosted a benefit concert featuring Foo Fighters. The arena project started nearly five years ago when Oak View Group was selected by the city of Seattle to renovate the original Seattle Center Coliseum. The final cost of the project is expected to exceed $1 billion.

NFL – Bears’ Fields learning from facing league’s best QBs
The lesson Bears rookie quarterback Justin Fields is learning from facing good defenses is the same as the one he is learning by watching Aaron Rodgers last week and Tom Brady this week and that’s how scoring drives require several big plays. Fields said he was used to scoring in one play at Ohio State, but NFL defenses can’t be so easily overmatched. The Bears are at Tampa Bay on Sunday looking to beat Brady and the defending Super Bowl champions to avoid consecutive defeats for the first time this season.

NFL – Matthew Stafford happy with Rams, won’t slam Lions
Matthew Stafford still has positive feelings about his time in Detroit. The Rams quarterback is set to face the Lions for the first time since his offseason trade to Los Angeles. Stafford rejected the suggestion that his early success with the Rams means he did not receive adequate support from the Lions. But his numbers for LA are plenty impressive. He has 16 touchdown passes and four interceptions through six games for the 5-1 Rams. Meanwhile, former Rams QB Jared Goff is struggling mightily for winless Detroit.

NFL – Browns’ Mayfield out with shoulder injury, Keenum starting
Cleveland Browns quarterback Baker Mayfield will sit out Thursday’s game against the Denver Broncos with a painful left shoulder injury and backup Case Keenum will start. The quarterback switch ends speculation about whether Mayfield would try to push through an injury to his non-throwing shoulder that he suffered last month and has worsened in recent weeks. By sitting out against the Broncos, Mayfield will have some extra time to rest and heal because the Browns don’t play again until Oct. 31 against Pittsburgh. The Browns will now turn to Keenum, who has made 62 career NFL starts, most recently for Washington in 2019.

NCAAMBKB – Gonzaga coach Mark Few pleads guilty to DUI, fined $1,000
Gonzaga basketball coach Mark Few has pleaded guilty to misdemeanor driving under the influence in Idaho and must pay a fine of $1,000 in lieu of spending four days in jail. He must also perform 24 hours of community service and his driver’s license was suspended until Nov. 5, after which he will be required to use an ignition interlock device while on unsupervised probation for the next year. Few had previously been suspended for top-ranked Gonzaga’s two exhibition games and the season opener Nov. 9 against Dixie State over the incident.

USA Basketball tabs Jim Boylen to coach World Cup qualifiers
Jim Boylen has been picked to coach USA Basketball next month in the first window of qualifying for the 2023 Basketball World Cup. Boylen’s team will be composed primarily of G League players. The roster is yet to be finalized. The team will train in Houston for about a week before traveling to Mexico to play Cuba on Nov. 28 and Mexico on Nov. 29. The first round of qualifying runs through July.

PHF – PHF strikes women’s hockey streaming deal with ESPN+
The Premier Hockey Federation has reached an agreement to make ESPN+ the exclusive home for watching games in this U.S. this season. It is a major step forward for the women’s hockey league in putting all of its games on a single platform. The deal covers 60 regular-season games for the newly renamed National Women’s Hockey League as well as the Isobel Cup playoffs. The season opens Nov. 6. The league has six teams: the Boston Pride, Buffalo Beauts, Connecticut Whale, Metropolitan Riveters, Toronto Six and the Minnesota Whitecaps.