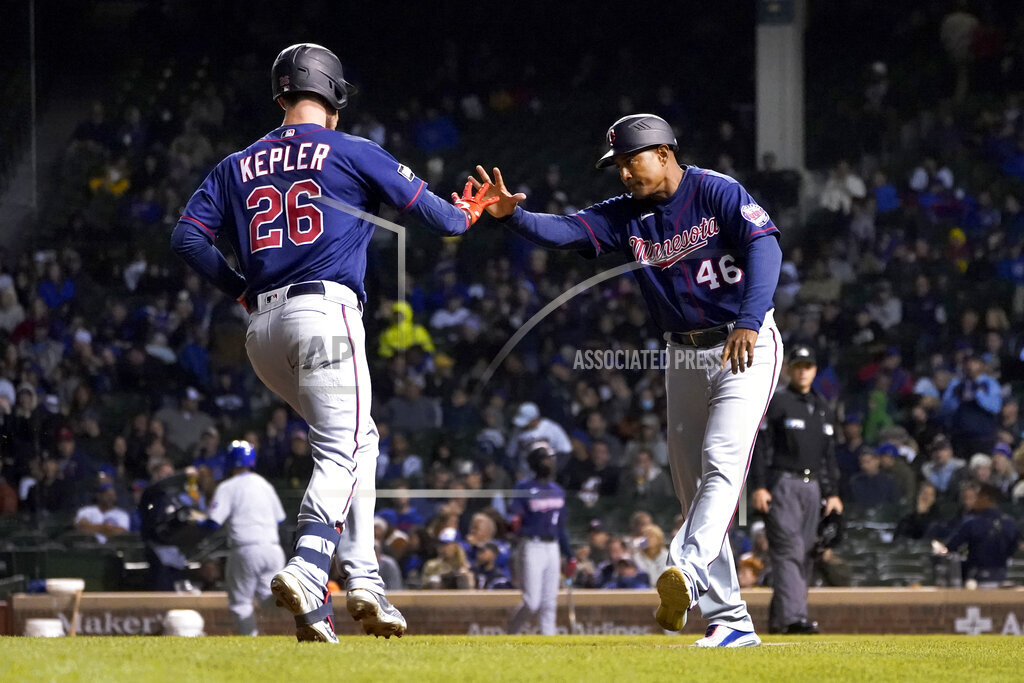 Twins 5, Cubs 4 – Kepler homers twice, Ryan’s 11 Ks lead Twins over Cubs 5-4
Max Kepler homered twice, rookie Joe Ryan struck out a season-high 11, and the Minnesota Twins held on to beat the Chicago Cubs 5-4. Kepler staked the Twins to a 2-0 lead with a homer in the first inning and hit a tiebreaking drive in the fourth for his 11th multihomer game, his second time this season. The Cubs and Twins are both 67-85, nearing the end of disappointing season. Chicago lost for the ninth time in 11 games.

White Sox at Tigers, PPD – White Sox-Tigers game postponed until Monday due to rain
Wednesday’s game between the Chicago White Sox and the Detroit Tigers at Comerica Park has been postponed because of rain. The game will be made up on Monday afternoon. The Tigers stalled the White Sox’s drive for the AL Central title with a 5-3 victory on Tuesday. Chicago’s magic number for clinching the division remains at two. It plays the second-place Cleveland Indians on the road in a five-game series beginning today. Chicago is closing in on its first division title in 13 years.

NFL – Fields to make first start for Bears with Dalton injured
Justin Fields is set to make his first start for the Chicago Bears. Coach Matt Nagy says the team will go with the prized rookie quarterback when the Bears visit the Cleveland Browns this week with veteran Andy Dalton sidelined because of a left knee injury. Nagy says Dalton remains the team’s No. 1 quarterback for now and the plan is for him to be the starter when he is healthy. Nagy adds the three-time Pro Bowler is week to week, though the Bears don’t think he will be placed on injured reserve. Super Bowl 52 MVP Nick Foles will be the backup quarterback.

NFL – NFL chief medical officer explains 2021 testing procedures
The NFL’s chief medical officer notes that daily testing of all players for COVID-19, something the union’s president has pushed for, has its strengths and weaknesses. Using the situations for many doctors and nurses as a comparison, Dr. Allen Sills says testing is one component of fighting through the pandemic. Nearly 94% of NFL players are vaccinated, and Sills is encouraged by that number — particularly because of how that number has grown since midsummer.

NHL – NHL camps open as teams take stock of unvaccinated players
Red Wings general manager Steve Yzerman says forward Tyler Bertuzzi’s is Detroit’s only unvaccinated player. Bertuzzi will not be able to play games in Canada unless federal laws there change. Detroit plays nine games north of the border. Bertuzzi is in line to forfeit over $450,000 of salary for that time because NHL protocols allow teams to suspend unvaccinated players when they are not available to participate. Edmonton GM Ken Holland says one Oilers player is unvaccinated. The NHL says it expects to have 10 to 15 unvaccinated players out of about 700 when the season begins.

NHL – NHL finds no evidence Evander Kane gambled on games
The NHL has found no evidence that San Jose Sharks forward Evander Kane bet on NHL games or tried to throw games after investigating allegations made by his estranged wife. Anna Kane alleged in an Instagram post this summer that Kane bet on NHL games and was “obviously throwing games to win money,” launching a probe by the league. The league is still investigating allegations of physical and sexual abuse made by Anna Kane. The Sharks say Kane will not take part in training camp until further notice while that investigation proceeds.

NBA – Chicago Bulls exercise contract options on White, Williams
Chicago Bulls have exercised rookie scale contract options for the 2022-23 season on guard Coby White and forward Patrick Williams. White had his fourth-year option exercised. He averaged 15.1 points and 4.8 assists in his second NBA season. His status for the start of the upcoming season is in question after he had surgery on his left shoulder in June. The Bulls picked up their third-year option on William. He averaged 9.2 points and 4.6 rebounds as a rookie after being drafted with the No. 4 overall pick in 2020.

NCAAFB – CFP expansion stalls as commissioners sort through issues
A plan to expand the College Football Playoff has stalled. The CFP management committee was not able to come to a consensus on a whether to grow the postseason format from four to 12 teams. The committee will reconvene next week, with college presidents joining online. No vote is expected. A plan to increase the four-team playoff to 12 teams was unveiled in June. Concerns have been raised about some of the details, including how many games a team would end up playing in a season. Executive Director Bill Hancock says an 8-team format was discussed at the latest meeting.

NCAAFB – Soldier Field showdown is another Chicago chapter for Irish
No. 12 Notre Dame travels to Chicago this weekend to play No. 18 Wisconsin at Soldier Field. It is another chapter in the long history of connections between Chicago and Notre Dame athletics. The most famous coach in Fighting Irish history, Knute Rockne, was raised in Chicago. Dozens of Chicago natives have played for Notre Dame and a few have come home to play for the NFL’s Chicago Bears. Current coach Brian Kelly has a chance this weekend to go ahead of Rockne as Notre Dame’s winnningest coach.

NCAAFB – Northwestern getting record gift of $480M from Ryan family
Northwestern University announced its largest donation ever Wednesday. It’s a $480 million gift that will be used for a variety of projects, from biomedicine to the campus football stadium. The money is coming from alumni Patrick and Shirley Ryan and family, who were already the school’s largest supporters. The money will support research in digital medicine, neurosciences, global health and other sciences. It will also support programs in microeconomics and the Kellogg School of Management. Northwestern also will redevelop Ryan Field, which is named for the family. The school plans to meet with community members before revealing design plans. Ryan Field opened in 1926 and expanded in 1949 and 1952. It last underwent an extensive renovation in 1997.  Northwestern’s president says the donation will have a “profound and lasting impact” on the school.

NCAAFB – SEC officials under microscope after high-profile mistakes
Whether it was Mississippi State’s game against Memphis or Auburn’s trip to Penn State, coaches in the SEC had plenty of reason to gripe about officiating last weekend. And with Texas and Oklahoma arriving soon, the league probably isn’t happy about the performance of the men and women in stripes lately. The most egregious came in the Bulldogs’ game against Memphis, when the officials made two and perhaps even three mistakes on the same decisive punt play. Penn State merely had an entire down skipped in its game against Auburn in Happy Valley. The situation has put the men and women in stripes exactly where they never like to be: in the spotlight.

NCAA – Suits against Ohio State over sex abuse by doc are dismissed
A federal judge has dismissed some of the biggest unsettled lawsuits filed by men who say Ohio State University officials failed to stop decades-old sexual abuse by now-deceased team doctor Richard Strauss. U.S. District Court Judge Michael Watson agreed Wednesday with OSU’s argument that the legal window for such claims had passed. In one ruling, Watson said it’s indisputable Strauss abused hundreds of young men. He says that Ohio State officials turned a blind eye and the university failed the survivors — and that now the legal system also has failed them. OSU has apologized publicly. It announced nearly $47 million in settlements for 185 plaintiffs and says it has since settled with dozens more.

Olympics – USOPC: American hopefuls for Beijing Games must have vaccine
U.S. athletes trying to make the Winter Olympics will have to be fully vaccinated for COVID-19 under a directive announced Wednesday by the U.S. Olympic and Paralympic Committee. CEO Sarah Hirshland wrote in a letter obtained by The Associated Press that starting Nov. 1, the USOPC will require staff, athletes and others utilizing training centers and other USOPC facilities to be vaccinated. She said the requirement will also apply to the full U.S. delegation at the Olympics and Paralympics. According to the team website, athletes will have to show proof of vaccination by Dec. 1.

Golf – US seeks answers to why Europe keeps winning Ryder Cup
The Americans always seem to bring the better players to the Ryder Cup. Europe keeps proving to be the better team. Answers don’t come easily. Dustin Johnson keeps it simple. He says Europe plays better and whoever plays better usually wins. Patrick Cantlay says it’s the chancy nature of golf and draws on comparisons with gin rummy and roulette. Cantlay is a rookie and says he really doesn’t have the answer. But the fact the Americans have such a young team could work as an advantage because they don’t have a lot of experience losing.

Soccer – US Soccer asks 9th Circuit to uphold ruling against players
The U.S. Soccer Federation has urged the 9th U.S. Circuit Court of Appeals in San Francisco to uphold a lower court’s decision to throw out the wage discrimination portion of a lawsuit filed by players on the women’s national team. The federation argued that it shouldn’t be required to pay the players tens of millions of dollars in what it referred to as phantom revenue. The federation says in a 59-page brief that U.S. District Judge R. Gary Klausner correctly granted a summary judgment to the federation on the pay claim in May 2020.

Soccer – Fans fight at French league game in latest stadium violence
There was more fan disorder in the French league as Marseille supporters ran onto the field and clashed with Angers counterparts at the final whistle. Moments after the 0-0 draw about 50 Marseille fans left their away enclosure and rushed along one side of the field to the stands where Angers fans were. Clashes broke out combatants used sticks and threw objects before stewards intervened. It was the latest incident of soccer violence in France this season, after serious disorder at the Nice-Marseille match last month. Last Saturday fans threw ripped-up seats and tried to fight each other at halftime during the northern derby between Lens and Lille.