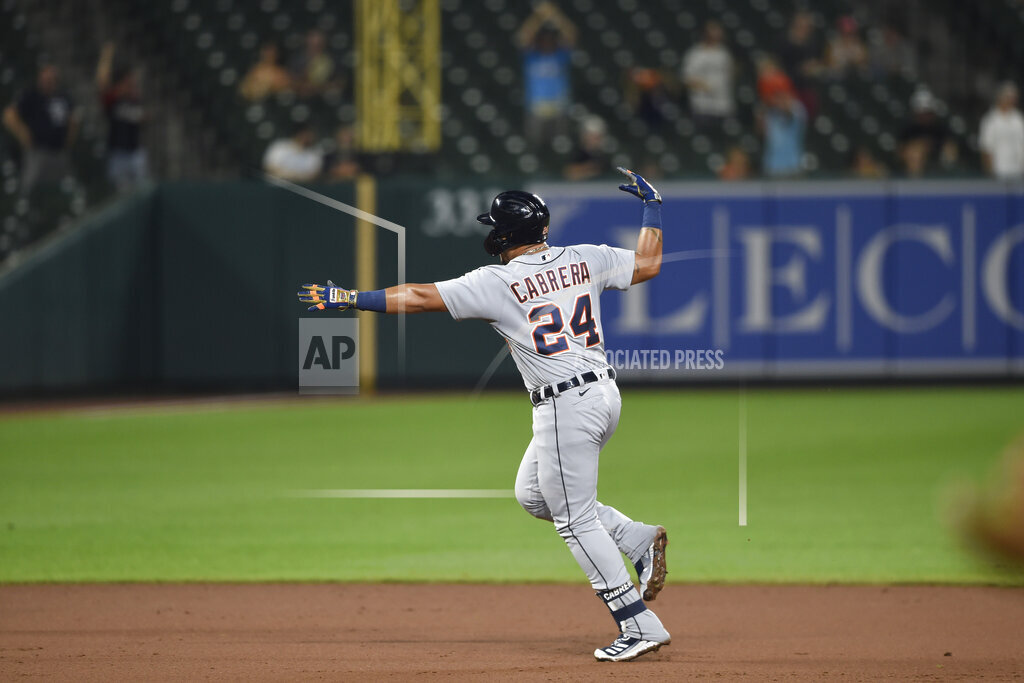 Tigers 5, Orioles 2 – Miguel Cabrera hits 499th homer, Tigers handle Orioles 5-2
Miguel Cabrera hit his 499th career home run, part of a three-hit night for the Detroit slugger that helped the Tigers hand the Baltimore Orioles their seventh straight loss, 5-2. Cabrera’s solo shot off Matt Harvey in the fifth inning opened the scoring. He also had two singles earlier in the game, plus a sacrifice fly in the sixth. The Tigers finish their road trip Thursday at Baltimore. Anthony Santander hit a two-run homer for the Orioles in the eighth.

Brewers 10, Cubs 0 – Brewers’ Burnes strikes out 10 in a row, ties MLB record
Milwaukee right-hander Corbin Burnes struck out 10 consecutive batters, tying the major league record and leading the Brewers past the Chicago Cubs 10-0. Burnes finished with a career-high 15 strikeouts in eight innings on a steamy night at Wrigley Field. An first-time All-Star this year, Burnes won his fifth straight decision. Omar Narváez homered and drove in four runs as NL Central leaders won their third in a row. The Cubs lost their seventh straight and have dropped 13 of 15.

MLB – Detroit’s Baddoo, Hill go on IL after outfield collision
The Detroit Tigers put outfielders Akil Baddoo and Derek Hill on the injured list after their frightening collision. Baddoo went on the seven-day concussion IL, and Hill went on the 10-day IL with bruised ribs. Manager A.J. Hinch said Hill also has knee soreness. The two collided in left-center field Tuesday night while chasing Anthony Santander’s fly ball. Hill made the catch, but both players were shaken up and had to leave the game. They were able to walk off the field.

MLB – White Sox place Rodón on IL with shoulder fatigue
The Chicago White Sox placed left-hander Carlos Rodón on the 10-day injured list with left shoulder fatigue. Rodón was headed back to Chicago for further testing. Chicago manager Tony La Russa said the team made the move to the injured list based on Rodón’s complaints of soreness and fatigue in his throwing shoulder. Rodón is 9-5 with a 2.38 ERA in 19 starts this season and was an All-Star for the first time in his career. Right-handed reliever Matt Foster was recalled from Triple-A Charlotte.

MLB – Field of Dreams: Inspired by 1989 film, MLB makes Iowa debut
Major League Baseball is preparing for its first game in the state of Iowa. The Chicago White Sox and New York Yankees will play in Dyersville on Thursday next to the site used in the 1989 movie “Field of Dreams.” One of the most famous cornfields in Hollywood history finally has the opportunity to host the real thing. The game was delayed by a year due to the pandemic. The event is part of MLB’s increased efforts to grow the game through areas without in-person access to the highest level of the sport.

NFL – Colts extend deals of GM Chris Ballard, coach Frank Reich
Indianapolis Colts general manager Chris Ballard and coach Frank Reich have been given contract extensions through 2026. Both Ballard and Reich have signed the deals. Ballard was hired in 2017 and is entering his 21st NFL season. In his four seasons overseeing football operations, Indianapolis has two double-digit win records and playoff appearances in those years. Ballard was selected the 2018 NFL top executive by the Professional Football Writers of America. Reich enters his fourth season as head coach. Reich has led the Colts to the playoffs in two of his first three seasons at the helm.

NFL – Former NFL player Nate Burleson joins ‘CBS This Morning’
Former NFL player Nate Burleson will join “CBS This Morning” as one of the show’s three co-hosts next month. Burleson will team with Gayle King and Tony Dokoupil on the show, replacing Anthony Mason. Mason is becoming a roving cultural reporter for CBS News. Burleson comes to CBS from the NFL Network’s morning show. He’s been an analyst for CBS’ Sunday afternoon football programming, which he will continue. It’s the first major personnel move for CBS News’ new leadership team of Neeraj Khemlani and Wendy McMahon, along with Shawna Thomas, the “CBS This Morning” executive producer. The show is about to move into a new Times Square studio.

NCAAFB – Freeman has new aggressive plan for Notre Dame defense
Marcus Freeman believes the best thing he can do as Notre Dame’s new defensive coordinator is to get out of the way of his players. The 35-year-old Freeman was hired earlier this year from Cincinnati. He replaces Clark Lea, ow the head coach at Vanderbilt. Freeman plans new looks and an aggressive defense. He does have holes to fill: All-America linebacker Jeremiah Owusu-Koramoah is in the NFL and so are defensive ends Daelin Hayes and Adetokunbo Ogundeji.

NCAAFB – NCAA hands Baylor probation, fine in sex assault scandal
The NCAA infractions committee says its investigation into the Baylor sexual assault scandal would result in four years probation and other sanctions. But the committee says the “unacceptable” behavior at the heart of the case did not violate NCAA rules. The NCAA ruling came more than five years after the sexual assault scandal broke at the world’s largest Baptist university. The NCAA says Baylor admitted to moral and ethical failings in its handling of sexual violence on campus but argued that did not break NCAA rules. The infractions committee says it reluctantly agreed.

Olympics – Tokyo’s Olympic fears give way to acceptance, to a point
When the Tokyo Olympics began during a rising number of coronavirus cases, the majority of the host nation were in opposition. Japanese Emperor Naruhito dropped the word “celebrating” from his opening declaration of welcome. But once the Games began and local media switched to covering Japanese athletes’ “medal rush,” many were won over. They watched TV to cheer on Japanese athletes in an Olympics that ended Sunday with a record 58 medals, including 27 gold, for the home nation.

NASCAR – Win on Sunday, sell on Monday still a goal for automakers
The old saying for auto dealers was always “Win on Sunday, sell on Monday.” A changing economy made the task more difficult. Despite the challenges, the top manufacturers still see motorsports as an effective marketing tool for their cars. Most of the top brands participate in some form of auto racing, both to show the performance of the brand and to transfer some of the motorsports technology into production cars. Multiple manufacturers have used racing events this year to debut upcoming street cars.

Golf – Goetz the medalist as rain delays match play at US Amateur
Ricky Castillo is the only player who finished his match in the opening round of a U.S. Amateur delayed by storms at Oakmont. Mark Goetz was the medalist among the 64 qualifiers. He only got in four holes in his match before the round was suspended by darkness. It resumes Thursday morning. Goetz is playing David Nyfjall of Sweden, who survived a 12-way playoff for the 64th and final spot in match play. Seven of the top 10 players in the world amateur ranking failed to get out of qualifying. That included Walker Cup teammates Pierceson Coody and Cole Hammer.

HSFB – Omaha football player dies after medical emergency in heat
A 16-year-old Nebraska high school football player died after a heat-related medical emergency at a practice. Drake Geiger died at an Omaha hospital on Tuesday night after medics were called to South High School. An Omaha Fire Department spokesman said Geiger had a pulse when medics arrived and was treated for heat exposure and taken to the University of Nebraska Medical Center. The temperature was 91 degrees with a heat index of 105 at the time Geiger collapsed. He is at least the fourth high school football player in less than a month to die during a practice or conditioning session, according to media reports.