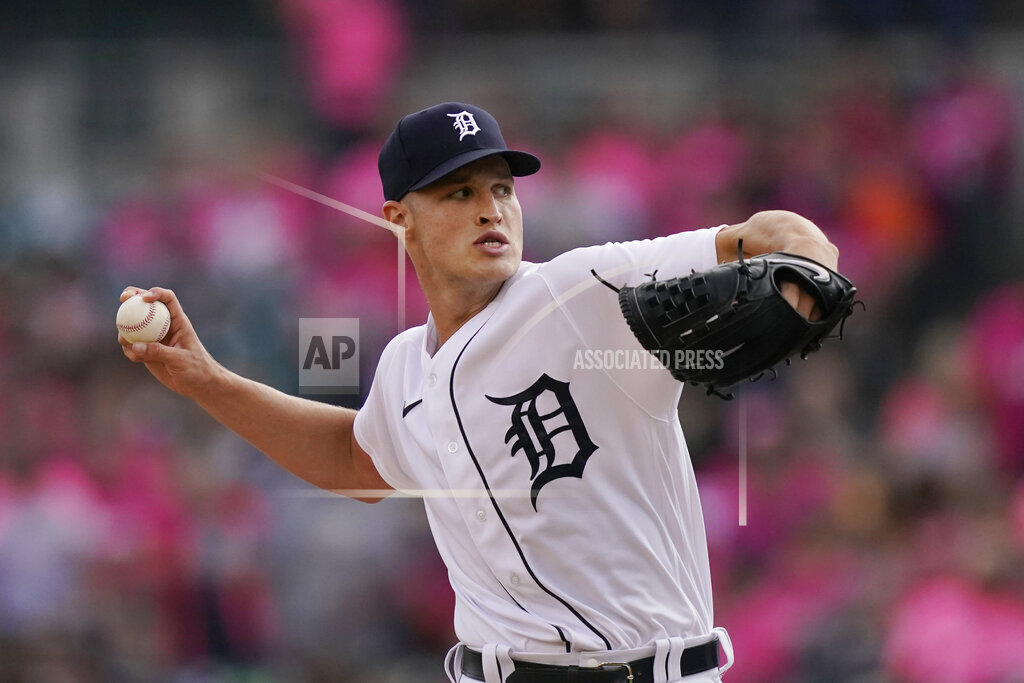 Tigers 4, Rangers 2 – Manning, Tigers win 6th in row, hand Texas 8th straight loss
Matt Manning pitched six strong innings and the Detroit Tigers won their sixth straight game, beating the skidding Texas Rangers 4-2. Robbie Grossman, Zack Short and Akil Baddoo hit home runs as the Tigers matched their longest winning streak since an eight-game run in 2016. Detroit has allowed a total of seven runs during this success string. The Rangers have lost eight in a row. They’ve been outscored 47-5 in six games since the All-Star break and have played 69 straight innings without holding a lead.

Twins 7, White Sox 2 – Kepler, Polanco power Twins past AL Central-leading Chicago
Max Kepler homered in his second straight game, Jorge Polanco also went deep, and the Minnesota Twins beat the Chicago White Sox 7-2 on Wednesday night. The Twins beat the AL Central leaders for just the fourth time in 16 games. They bounced back after Chicago rallied late to win Tuesday’s game and came out on top after losing five of six. Michael Pineda (4-5) went five innings, allowing one run and four hits, in his first win since May 26.

Cardinals 3, Cubs 2 – F/10 – Molina lifts Cards to 3-2 win over Cubs in 10 innings
Yadier Molina doubled home the winning run against All-Star closer Craig Kimbrel in the 10th inning to give the St. Louis Cardinals a 3-2 victory over the Chicago Cubs. Adam Wainwright pitched seven strong innings for the Cardinals. Harrison Bader and Dylan Carlson each hit an RBI double in the seventh to put St. Louis ahead 2-1. Bader also robbed Willson Contreras of an early two-run homer. Chicago tied it in the ninth on pinch-hitter Eric Sogard’s run-scoring double off Giovanny Gallegos.

MLB – White Sox rookie catcher Mercedes says he’s leaving baseball
Yermín Mercedes, the surprising rookie who helped carry the Chicago White Sox with his booming bat early in the season and got sent to the minors following a prolonged slump, says he is stepping away from baseball. Mercedes announced his decision on Instagram on Wednesday. He posted an image of the words “it’s over.”

NBA – NBA Finals up over last year, but post 4th-lowest average
Television ratings for the NBA Finals and playoffs posted sizable increases over last year. But that was the only good news for the NBA as far as viewer numbers. The six-game series between the Milwaukee Bucks and Phoenix Suns averaged 9.91 million viewers, a 32% increase over last year’s series between the Los Angeles Lakers and Miami Heat, which also went six games. However, the average makes it the fourth-lowest since 1997. Milwaukee’s 105-98 victory over Phoenix on Tuesday night attracted the most viewers in the series, averaging 12.52 million.

NBA – Title rewards Antetokounmpo’s decision to commit to Bucks
This could have been the offseason in which Giannis Antetokounmpo entered the free-agent market and potentially joined forces with another superstar player to try winning multiple titles together.  Antetokounmpo will spend the summer celebrating a title instead. Leading the Milwaukee Bucks to their first championship in half century rewarded Antetokounmpo for his December decision to sign a supermax extension with them. Antetokounmpo averaged 35.2 points, 13.2 rebounds and 5 assists to help the Bucks beat the Phoenix Suns 4-2 in the NBA Finals.

NHL – Seattle Kraken sets first roster, will open season at Vegas
The Seattle Kraken have set their initial roster. The NHL’s newest expansion team unveiled all 30 picks at a ceremony near Lake Union with Commissioner Gary Bettman in attendance. Seattle took Calgary captain Mark Giordano and New York Islanders winger Jordan Eberle among their picks.  It was a celebratory night. The team will make its debut at Vegas in mid-October in a matchp of the NHL’s two newest teams. The Kraken will play their first home game on Oct. 23 against rival Vancouver.  The Kraken selected from Detroit, defenseman Dennis Cholowski.  Cholowski, 23, was the Red Wings 1st round pick, 20th overall, in the 2016 entry Draft.  He’s played in 104 NHL games, scoring 10 goals and recording 17 assists.  The Blackhawks lost center John Quenneville to Seattle. He was the 30th overall pick in 2014 by the New Jersey Devils and was traded to Chicago after the 2018-19 season for center John Hayden. He is the second cousin to former Blackhawks and now Florida Panthers Head Coach Joel Quenneville.  In his 42 games in the NHL, he’s scored 2 goals and had 3 assists, but he only played in 9 games this past season and did not register a point.  He played 16 games with Chicago’s AHL affiliate in Rockford, scoring a goal and an assist in 16 games played.

NHL – NHL schedule will include break but no guarantee of Olympics
Commissioner Gary Bettman says the NHL schedule will include a break for the 2022 Winter Olympics even though there is no commitment the league’s players will go to Beijing. Last month during the Stanley Cup Final, Bettman cast doubt on whether the league would participate, citing safety and logistical concerns as well as a tightening time frame. The schedule will be released on Thursday and will have built-in mechanisms to adjust should players not take part. NHL players did go to South Korea in 2018 after participating in the previous five dating to 1998.

NCAAFB – AP source: Texas, Oklahoma talk to SEC about joining league
Texas and Oklahoma have had discussions with the Southeastern Conference about leaving the Big 12. A person with knowledge of the situation says the two schools have talked about switching conferences with SEC officials, but no formal invitations have been extended. The person also tells the AP that Texas initiated the discussions. SEC Commissioner Greg Sankey and the two schools all declined comment. Such a move would give the SEC 16 football teams. It would be a devastating blow to the 10-member Big 12.

NCAAFB – College coaches, administrators urging players to vaccinate
College football coaches around the country are spending much of the offseason urging their players to get vaccinated against the coronavirus. They can’t require it amid legal concerns. Alabama coach Nick Saban and others say it’s a personal decision, but one with consequences for their team. Saban this summer urged Alabama residents to get vaccinated in a public service announcement. Other coaches like Oklahoma’s Lincoln Riley are pointing to real-life examples in other sports where a positive test ruined a shot at winning an event.

NCAAFB – Hall of Famer Bobby Bowden has terminal medical condition
Legendary college football coach Bobby Bowden says he has been diagnosed with a terminal medical condition. He did not disclose his condition in his statement Wednesday. The 91-year-old Bowden says he is at peace and is prepared for what is to come.  The College Football Hall of Famer was hospitalized last October after he tested positive for COVID-19. The test came a few days after he returned home from a lengthy hospital stay for an infection in his leg.  Bowden had 357 wins during his coaching career, most of them at Florida State. The Seminoles won 12 Atlantic Coast Conference championships and two national titles in his tenure.

Softball – Abbott’s 1-hitter lifts US over Canada 1-0 for 2-0 start
Monica Abbott pitched a one-hitter, center fielder Haylie McCleney and second baseman Ali Aguilar combined with catcher Aubree Munro to throw out the potential tying run at the plate in the sixth inning and the United States beat Canada 1-0 for a 2-0 start. Amanda Chidester hit an RBI single in the fifth off loser Jenna Caira that scored McCleney. McCleney went 3 for 3 with a walk and has reached base seven times in the two games. Trying to regain the gold medal they lost to Japan in 2008, the Americans are getting just enough offense.

Women’s Soccer – Sweden beats US as Olympic women’s soccer tournament begins
Sweden has once again stunned the United States women’s soccer team at the Olympics, this time with a 3-0 victory. The top-ranked Americans were the favorites to win in Tokyo and owned a 44-match unbeaten streak. The Swedes bounced the Americans from the 2016 Brazil Games in the quarterfinals. Then in April, Sweden played the United States to a 1-1 draw in Stockholm, which snapped a winning streak dating back to January 2019. Sweden now leads Group G heading into Saturday’s game against Australia, while the United States faces New Zealand. The top two teams in the group advance to the knockout round.

Men’s Basketball – LaVine cleared, USA Basketball awaits 3 NBA Finals players
USA Basketball expects to have its full 12-man roster available for Sunday’s matchup against France. It’s the first game for both teams in the Tokyo Olympics. Zach LaVine has been cleared to exit the health and safety protocols that stemmed from a coronavirus testing-related issue. He will fly to Japan and rejoin the team Thursday. Khris Middleton, Jrue Holiday and Devin Booker are expected to arrive in Tokyo on Saturday after competing in the NBA Finals. Middleton and Holiday just helped the Bucks beat Booker’s Suns.

Cycling – Olympic cyclists enjoy natural COVID-19 bubble outside Tokyo
The original plan for cycling at the Tokyo Games included a $100 million temporary velodrome in the heart of the Olympic Village. But organizers scrapped that idea along the way and decided to put track cycling — along with mountain biking — at an existing facility in Izu. The UCI, which governs cycling, and riders initially objected to the change fearing it would detract from the Olympic experience. Now, they’re among hundreds of cyclists relishing a chance to prepare in the relative safety of their own bubble, far away from hot spots in Tokyo that continue to threaten the Summer Games.

WADA – Seeking reform, US holds $1.3 million in dues from WADA
The U.S. government will hold onto nearly half of the $2.93 million in dues it owes to the World Anti-Doping Agency while it waits to see how the global drug-fighting agency moves forward with reforming its governing structure. Richard Baum of the White House drug control office told a congressional committee Wednesday that a $1.6 payment to WADA would be made soon, but that in breaking with past practice, the full sum would not be delivered all at once. The news was the latest in a yearlong tussle between WADA and the U.S. government. The government has criticized the agency for not moving urgently enough to reform itself in the wake of the Russian doping scandal.

Covid – 2 more Olympic athletes among 91 total Tokyo virus cases
Two athletes were among four residents of the Olympic Village who have been added to the tally of people accredited for the Tokyo Games who have tested positive for COVID-19 this month. That brings the number to 91. Skateboarder Candy Jacobs of the Netherlands and table tennis player Pavel Sirucek of the Czech Republic tested positive. They had to leave the village to enter a quarantine hotel. Two other village residents were among the new cases announced Thursday by Tokyo organizers. They are in the “Games-concerned personnel” category that includes team coaches and officials. The 91 cases recorded since July 1 doesn’t include athletes who tested positive at home before their scheduled travel to Tokyo.