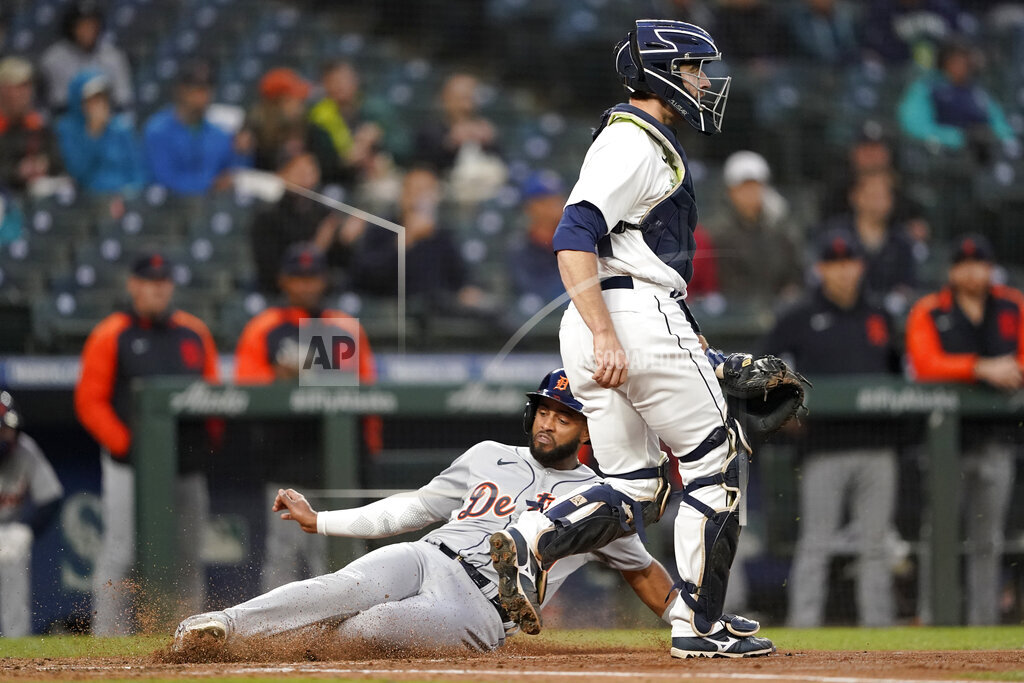 Tigers 6, Mariners 2 – Skubal snaps losing streak, Tigers beat Mariners 6-2
Tarik Skubal struck out a career-high nine in his first win of the season, Harold Castro drove in three runs and the Detroit Tigers beat the Seattle Mariners 6-2. Skubal (1-6) scattered four hits over five innings, helping Detroit earn its first series sweep in Seattle since April 2006. With the sweep, which included Spencer Turnbull’s no-hitter on Tuesday night, Detroit has won four of its last five and eight of 10. The Mariners had nine hits against Tigers pitchers in the three-game series with 29 strikeouts.

White Sox 2, Twins 1 – Sox beat twins, Tatis Jr., Hosmer activated, Lee Evans dies
Lucas Giolito gave up two hits over eight innings with a season-high 11 strikeouts, and the Chicago White Sox beat the Minnesota Twins 2-1. Giolito threw 111 pitches in his longest start of the year. Nelson Cruz’s home run in the third accounted for the only Minnesota runner past second base. Cruz had the only other hit, a single in the first inning. Liam Hendricks pitched a perfect ninth for his ninth save. Chicago won for the 20th time in 28 games.

Today
Washington Nationals at Chicago Cubs, 2:20 p.m.
Tigers and White Sox are off

Grizzlies 100, Spurs 96 – Grizzlies end Spurs’ season, advance to face Warriors
Dillon Brooks scored eight of his 24 points in the fourth quarter to help put Memphis ahead to stay and the Grizzlies eliminated the San Antonio Spurs 100-96 on Wednesday night in the first Western Conference play-in game. The Grizzlies will play at Golden State on Friday night for the No. 8 seed and a first-round series starting Sunday against top-seeded Utah.

Lakers 103, Warriors 100 – LeBron’s 3 lifts Lakers over Warriors in West play-in game
LeBron James made a long, go-ahead 3-pointer with 58.2 seconds remaining, rallying the Los Angeles Lakers to a 103-100 victory over the Golden State Warriors in a Western Conference play-in tournament game. James finished with 22 points, 11 rebounds and 10 assists for his sixth triple-double of the season, Anthony Davis scored 13 of his 25 points in the fourth quarter, and the Lakers overcame 37 points from league scoring champ Stephen Curry. The Lakers earned the seventh seed for the playoffs and a first-round matchup with second-seeded Phoenix.

NHL – NHL clears Blues, Golden Knights after virus testing errors
The NHL has cleared the St. Louis Blues and Vegas Golden Knights after virus testing errors. The league says multiple COVID-19 tests came back positive for each team from the same lab. Further testing turned up negative results. All players who were isolated and retested were cleared to play. That cleared the way for Game 2 between the Blues and the Colorado Avalanche. Vegas plays Game 3 at Minnesota on Thursday night. That series is tied 1-1.

Sky 85, Dream 77 – Short-handed Chicago holds off Atlanta 85-77
Kahleah Copper scored 23 points, Ruthy Hebard had 18 points and 10 rebounds, and the short-handed Chicago Sky held off the Atlanta Dream 85-77. Chicago led by as many as 23 points, but Atlanta trimmed it to 73-71 with 2:12 remaining. Astou Ndour scored the next five points to extend the Sky’s lead to seven, and Diamond DeShields, who was 3-of-11 shooting, sealed it on a baseline jumper with 35.9 seconds left. Ndour finished with 15 points and 11 rebounds, and Courtney Vandersloot had 12 points, six rebounds and eight assists for Chicago. Courtney Williams led Atlanta with 24 points.

Golf – Stricker not sure if Tiger available as Ryder Cup assistant
Steve Stricker would love to have Tiger Woods as an assistant captain at the Ryder Cup. That much is obvious. Not so clear is whether Woods will have healed from leg injuries from his Feb. 23 car crash in Los Angeles. Stricker says he spoke to Woods last week and Woods seemed to be in great spirits. He just can’t say at this point whether Woods can commit to being at Whistling Straits the final week in September for the Ryder Cup. Stricker also says he’s skipping the U.S. Senior Open to play the John Deere Classic.

NCAA – NCAA’s D1 Council hopes athlete pay rules hashed out in June
The NCAA Division I Council plans to act on legislative proposals next month that would allow athletes to be paid to be sponsors, social media influencers and product endorsers. That word from the governing body for college sports. The council will take up the issue at its meeting June 22-23 with the goal of having legislation in place by July 1. That would provide greater consistency in the name, image and likeness opportunities available to student-athletes nationally as state laws become effective on or around that date.