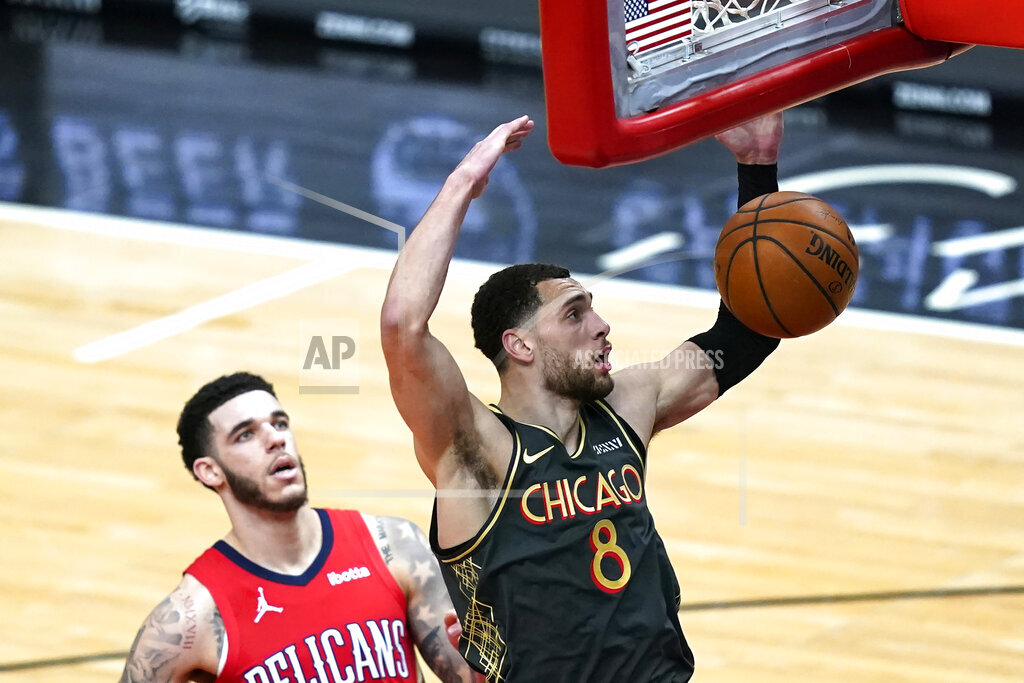 Bulls 129, Pelicans 116 – LaVine scores 46 points, Bulls hit 25 3s to beat Pelicans
Zach LaVine scored a season-high 46 points, hitting nine of Chicago’s franchise-record 25 3-pointers, and the Bulls cooled off the New Orleans Pelicans with a 129-116 victory. Coby White made eight 3s and scored 30 points in an impressive show by Chicago’s starting backcourt. Led by LaVine and White, the Bulls went 25 for 47 from beyond the arc and shot 59% (48 for 81) overall. New Orleans had won four in a row, including a 130-101 victory over Houston on Tuesday night. But the Pelicans looked a little tired in the second half of the opener of a four-game trip.

Nets 104, Pacers 94 – Kyrie Irving has 35 points, Nets use defense to rout Pacers
Kyrie Irving had 35 points and eight assists and the Brooklyn Nets were defensively dominant in the first half in shutting down the Indiana Pacers 104-94 to snap a three-game losing streak. A night after an embarrassing effort in Detroit, when the Nets yielded 38 points in the first quarter, the Pacers didn’t reach that total until 8:46 remained in the third. By then, the Nets had built a 32-point halftime lead, their largest since moving to Brooklyn in 2012, and with a 62-30 bulge allowed just two more points than their best total since moving from New Jersey.

NBA – Pistons center Jahlil Okafor has surgery on left knee
The Detroit Pistons say center Jahlil Okafor had left knee surgery and is expected to miss six to eight weeks. The team says the procedure was to clean the lateral meniscus. The Pistons acquired Okafor this past offseason, and he averaged 4.3 points and 10 minutes in his first 12 games. Okafor hasn’t played since a Jan. 30 loss at Golden State. Detroit hosts Indiana on Thursday night.

NBA – Mavs’ Cuban relents on anthem after NBA reiterates policy
Dallas Mavericks owner Mark Cuban has relented on not playing the national anthem before home games this season. The move came shortly after the NBA reiterated its “longstanding league policy” to include the anthem. Republican Lt. Gov. Dan Patrick says he intends to introduce a bill in the Texas Senate that will ensure the national anthem is played at all events that receive public funding. He says the bill has broad support.

NHL – Hey ref, how was breakfast? Unique season forges new bonds
NHL referees and linesmen are working multiple consecutive games between the same teams this season. It has allowed them to build more of a rapport with players, even amid coronavirus pandemic restrictions. Officials are getting to know players better on and off the ice in part because they’re in the same cities more often. As rivalries mount between teams during a season of all divisional play, seeing the same familiar faces in stripes could be helping keep penalty calls under control.

NFL – Brady-Brate trophy pass wows Bucs’ Super Bowl boat parade
The Tampa Bay Buccaneers held a boat parade to celebrate their championship on a sun-splashed day with thousands of fans lining the Hillsborough River near downtown Tampa. At one point, quarterback Tom Brady was captured on video Wednesday tossing the championship Lombardi Trophy from his boat to his shirtless teammate Cameron Brate in another boat. That brought wild cheers from fans and players. As the parade came to a close, coach Bruce Arians said that the Buccaneers could easily repeat as champions if the team stays intact. Brady already said he’ll be back.

MLB – Tigers agree to minor league deals with Nunez, Garcia
The Detroit Tigers have agreed to minor league deals with infielders Renato Nunez and Greg Garcia. The Tigers say both players will receive invites to major league spring training. Nunez hit 31 home runs for Baltimore in 2019, then batted .256 with 12 homers in the shortened 2020 season. The 26-year-old Nunez was released by the Orioles after last season. Garcia hit .200 in 35 games last year for San Diego. That was his second season with the Padres after he spent five with St. Louis.

MLB – White Sox hire Narron as instructor on La Russa’s staff
The Chicago White Sox have hired former Texas Rangers and Cincinnati Reds manager Jerry Narron as a major league instructor on Tony La Russa’s staff. The team also promoted James Kruk to head athletic trainer and Brett Walker to director of rehabilitation on Wednesday. The 65-year-old Narron was 291-341 over parts of five seasons managing Texas (2001-02) and Cincinnati (2005-07). He has spent 26 years on major league coaching staffs, including a stint in 2020 as the Boston Red Sox’s bench coach. Narron was with Milwaukee from 2011 to 2015 when catcher Jonathan Lucroy had some of his most productive seasons. The two-time All-Star agreed to a minor league deal with the White Sox last week after playing in just one game for Boston in 2020.

Olympics – Tokyo Olympics opening ceremonies will air live in US
U.S. viewers who have clamored to view the Olympic Games’ opening ceremonies live when the Games haven’t been in North America will finally get their wish. NBC will air the opening from the Tokyo Olympics live on July 23. The opening ceremonies will begin at 8 p.m. in Japan, which is 7 a.m. in New York and 4 a.m. in Los Angeles. Molly Solomon, the executive producer and president of NBC Olympics, says the global significance of gathering in Tokyo during the pandemic, as well as changing viewing habits, were the main factors in deciding to air the ceremonies live. 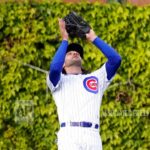 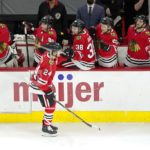