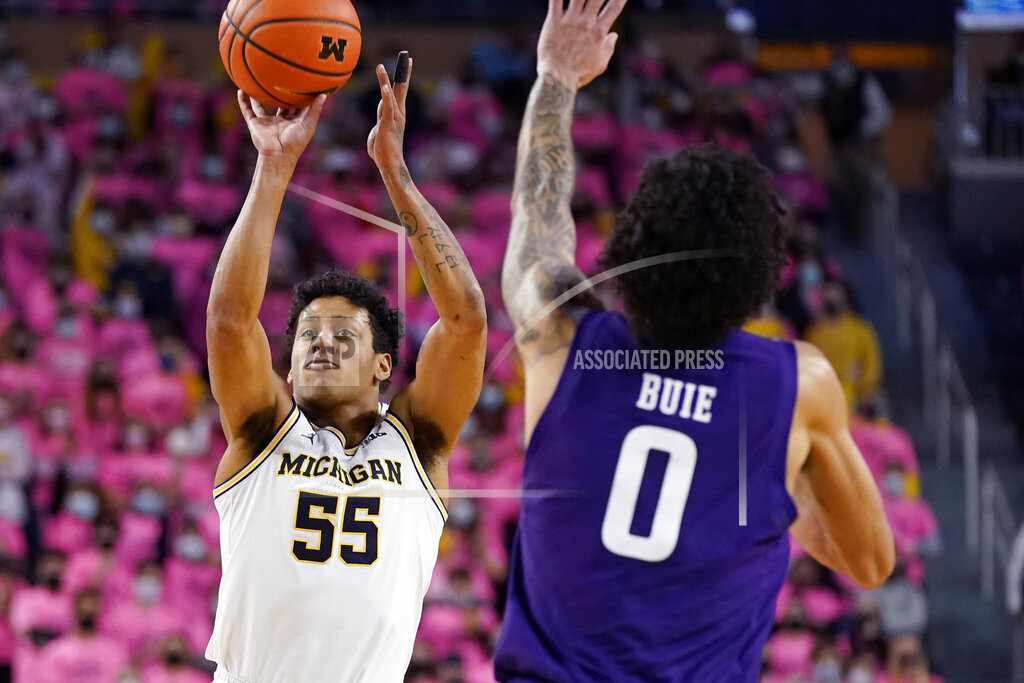 Michigan 72, Northwestern 70 – Michigan escapes 72-70 as Northwestern misses 3 at buzzer
Freshman Caleb Houstan scored 18 points, DeVante’ Jones added 15 points with six assists, and Michigan escaped with a 72-70 victory over Northwestern. Michigan forward Jaron Faulds missed two free throws, leading 72-69, with 8.5 seconds left and the Wolverines elected to foul Boo Buie near midcourt before he could attempt at 3-pointer. Buie, an 80% free-throw shooter, made the first free throw and missed the second but Pete Nance grabbed the rebound and got it to Julian Roper for a 3-pointer that didn’t hit the rim at the buzzer.

Blackhawks 8, Red Wings 5 – Strome has hat trick as Blackhawks outlast Red Wings 8-5
Dylan Strome scored three goals and the Chicago Blackhawks had their highest-scoring game of the season in an 8-5 win over the Detroit Red Wings on Wednesday. Alex DeBrincat added two third-period goals for the Blackhawks, who led 4-0 in the first period but let Detroit get back into the game. DeBrincat’s empty-netter with 1:43 remaining finally put the game away as Chicago ended a four-game winless streak. Dominik Kubalik, Sam Lafferty and Brandon Hagel also scored for Chicago. Robby Fabbri, Tyler Bertuzzi, Pius Suter, Moritz Seiter and Dylan Larkin scored for Detroit.

NHL – Blackhawks to consider candidates from outside hockey for GM
The Chicago Blackhawks are taking an unusual approach to their search for their next general manager and plan to make a decision before the NHL trade deadline in March. Blackhawks CEO Danny Wirtz says the interview process will include candidates “both inside and outside of hockey.” Wirtz and President of Business Operations Jaime Faulkner will lead the interview process, with help from an advisory group. Interim GM Kyle Davidson will interview for the position, and Wirtz says Davidson “will continue to have full autonomy of hockey decisions in the meantime.”

Hornets 158, Pacers 126 – Hornets break franchise record with 158-126 win over Pacers
The Charlotte Hornets broke the franchise’s single-game scoring record on Wednesday night and notched the highest point total in the NBA this season in their 158-126 rout of the Indiana Pacers.  — also a career best. Indiana was led by Goga Bitdaze and rookie Isaiah Jackson, who both scored 17 points.

MLB – Triple the misery: MLB’s labor woes threaten third spring
Major League Baseball’s spring training games don’t count in the official standings. But they do count for fans who love to make the trip to Arizona and Florida each year. They also count for businesses that count on Cactus and Grapefruit League games each February and March for a big chunk of income. The mood for both groups is a little glum these days as the players’ union and owners continue to bicker over finances. The owners locked out the players on Dec. 2 and unless an agreement between the two sides is reached soon, the spring training schedule is in trouble. The first games are scheduled for Feb. 26.

Olympics – US bobsledder Williamson positive for virus, status unclear
U.S. Olympic bobsledder Josh Williamson has tested positive for COVID-19 and won’t fly with his teammates to China, though he remains hopeful of getting there in time for the Beijing Games. Williamson was expected to be part of the USA-1 four-man team in Beijing. He tested positive Sunday and revealed his status Wednesday. He has spent the last few days at the Chula Vista Elite Athlete Training Center, a U.S. Olympic & Paralympic training site in Southern California, along with many other members of the Beijing-bound bobsled and skeleton teams.

Golf – PGA – Horschel leads, Rahm sharp
Top-ranked Jon Rahm closed with an eagle on the tougher South Course at Torrey Pines for a 6-under 66, trailing leader Billy Horschel by three strokes after the first round of the Farmers Insurance Open.  Horschel shot a bogey-free 9-under 63 on the North Course and led Michael Thompson by one stroke. Of the 30 players who shot 67 or better, 26 played the North. Rahm’s was the best score on the South by one over Luke List, Peter Malnati and Cameron Tringale.

NCAAFB – LSU associate AD says she’s been fired
Lawyers for an associate athletic director who filed a $50 million federal racketeering lawsuit against LSU say she has been fired in retaliation and asked the court to add that claim to her suit. Sharon Lewis claimed in state and federal lawsuits filed in 2021 that she was denied pay raises and was verbally abused after reporting that former football coach Les Miles had sexually harassed female student workers and made racist remarks.