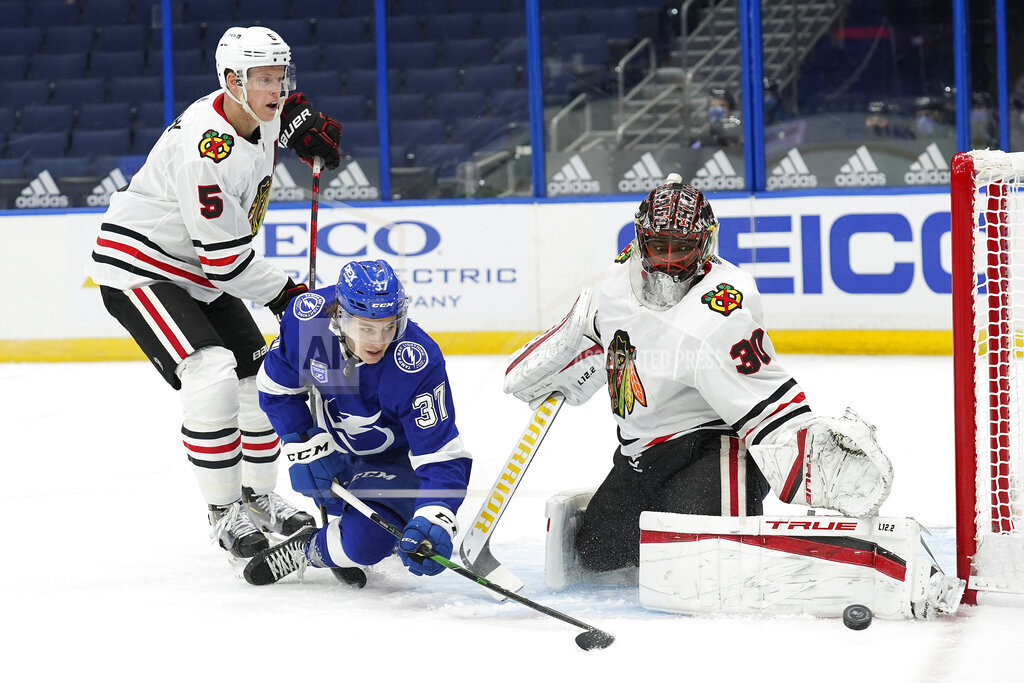 Lightning 5, Blackhawks 1 – Stamkos has goal, 2 assists as Lightning beat Blackhawks 5-1
Steven Stamkos had a goal and two assists in his return to the Tampa Bay Lightning lineup, and the defending Stanley Cup champions opened the season with 5-1 victory against the Chicago Blackhawks. The Lightning captain, who played just one game in the playoffs, has points in 17 consecutive games — including 14 goals. Brayden Point, Anthony Cirelli, Ondrej Palat and Mathieu Joseph also scored to help Tampa Bay win its seventh consecutive season opener. Victor Hedman and Alex Killorn each finished with two assists. Andrei Vasilevskiy had 23 saves. Dylan Strome scored for Chicago, and Malcolm Subban stopped 28 shots.

NHL – Larkin named Red Wings captain
The Detroit Red Wings on Wednesday named center Dylan Larkin the 37th captain in the franchise’s history. Larkin, 24, is entering his sixth season in Detroit. A Waterford native and former Michigan standout, Larkin becomes the first Michigander to be named captain of the team.

Bucks 110, Pistons 101 – Antetokounmpo’s triple-double lifts Bucks over Pistons
Giannis Antetokounmpo had 22 points, 10 rebounds and 10 assists, and the Milwaukee Bucks easily beat the Detroit Pistons for the third time this month, 110-101. The Bucks built a commanding early lead with a barrage of 3-pointers. Brook Lopez connected three times from beyond the arc in the first quarter, when the Bucks were 7 of 11 from long distance. Detroit was just 4 of 20 overall in the period and trailed 27-13 after one. At one point, Milwaukee led 52-29. The Pistons cut the deficit to 11 at halftime but never seemed like a serious threat to overtake Milwaukee. Jerami Grant led Detroit with 22 points.

NBA – Harden headed to Nets in blockbuster 4-team deal
The Brooklyn Nets have agreed to acquire three-time scoring champion James Harden from the Houston Rockets, a deal that reunites him with Kevin Durant and gives him the move that he has sought for weeks, said a person familiar with the situation. Harden is going to the Nets as part of a four-team deal that also involves Indiana and Cleveland, according to the person who spoke to The Associated Press Wednesday on condition of anonymity because the trade call with the NBA — which signs off on all deals — has not been completed. The deal was struck less than 24 hours after Harden seemed to deliver a farewell address to the Rockets Tuesday night.

Tonight
Calvin College at Eastern Michigan, 7:00 p.m.
Michigan State at (5) Iowa, PPD
NCAAMBB – Michigan State-Iowa basketball game postponed
Michigan State’s basketball game at No. 5 Iowa on Thursday night has been postponed because of COVID-19 issues with the Spartans.  Michigan State center Mady Sissoko and guard Steven Izzo have tested positive, and the school said there was an additional positive test Wednesday afternoon. “I’m really disappointed, but it just goes to prove that this can affect anyone,” coach Tom Izzo said. “I feel so comfortable that me, my son and my players did everything possible and followed every protocol as best we could. I’m really, really impressed with the way they have conducted themselves. This virus does not discriminate and I can’t emphasize enough how important it is to wear a mask, wash your hands and follow protocols.”

NCAAFB – Michigan hires Mike Hart as running back mentor
Michigan has hired former running back Mike Hart to be the program’s running back mentor. The Wolverines announced the move Wednesday. Hart is Michigan’s career rushing leader, and he was the running backs coach at Indiana for the past four seasons. Hart was a 2018 nominee for the Broyles Award, which goes to the nation’s top assistant. Coach Jim Harbaugh says he’s excited about adding Hart to the staff.

NFL – Bears plan to keep Nagy, GM Pace for at least 1 more season
The Chicago Bears plan to keep general manager Ryan Pace and coach Matt Nagy for at least another season. Chairman George McCaskey says the team opted against sweeping changes in leadership after the Bears slipped into the playoffs despite going 8-8 for the second year in a row. The announcement comes on the heels of the Bears’ wild-card loss at New Orleans on Sunday, their second playoff appearance in three years.  The Bears have two playoff appearances and a 42-54 regular-season record in six years under Pace, while Nagy is 28-20.