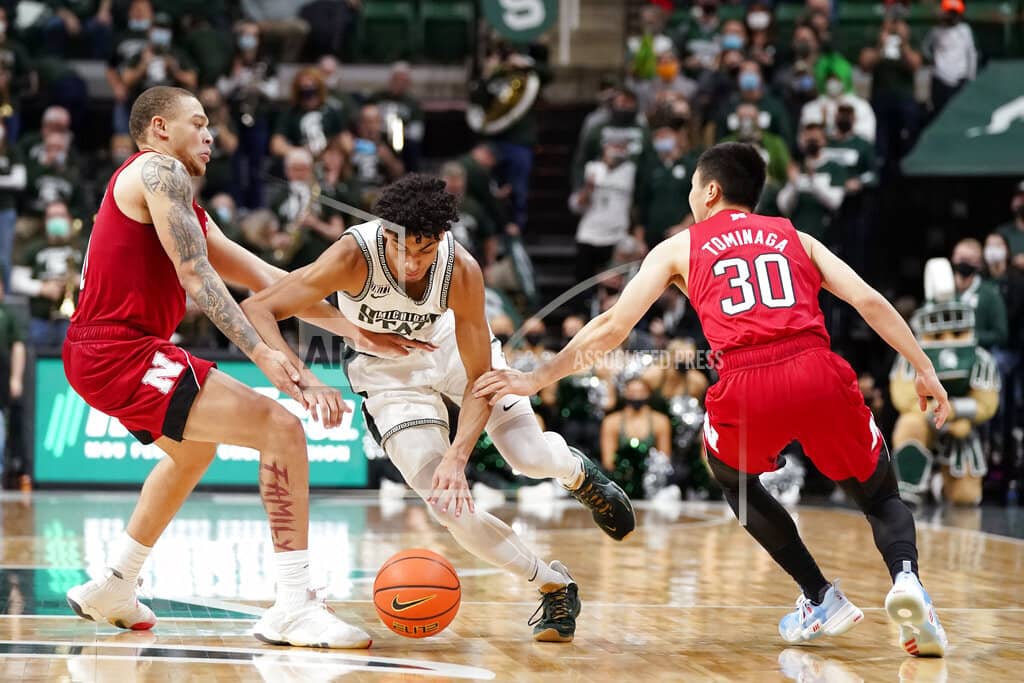 Notre Dame 78, North Carolina 73 – Laszewski helps lift Notre Dame over North Carolina 78-73
Nate Laszewski (La-SHEH-skee) scored a season-high 20 points, including consecutive 3-pointers to give the lead back to Notre Dame, and the Fighting Irish held on for a 78-73 victory over North Carolina. The Tar Heels rallied from a 13-point second-half deficit to take the lead on an Armando Bacot bucket before Laszewski hit back-to-back 3s, the second coming with two minutes left, to give Notre Dame the lead for good. Blake Wesley added 18 points, Dane Goodwin 17 and Cormac Ryan 11 for the Irish. Bacot scored 21 points with a career-high 17 rebounds, RJ Davis added 19 points and Caleb Love 15 for North Carolina.

Hornets 140, Pistons 111 – Oubre, Hornets set franchise record for 3s, rout Pistons
Kelly Oubre Jr. hit a career-high nine of Charlotte’s franchise-record 24 3-pointers and the Hornets routed the Pistons 140-111 on Wednesday night. Oubre had eight 3-pointers in the fourth quarter, tying an NBA record set by Milwaukee’s Michael Redd in 2002. Oubre was 8 of 9 on 3s in the fourth quarter before being subbed out with 4:08 left and the Hornets leading by 35. Golden State’s Klay Thompson holds the league record for 3-pointers in a quarter with nine, that coming in the third quarter of a game in 2015. Oubre finished 9 of 14 for the game, and the Hornets shot 57.1% overall from deep. Trey Lyles had 17 points for Detroit.

Nets 129, Pacers 121 – Irving helps Nets charge past Pacers in his season debut
Kyrie Irving scored 22 points and sparked Brooklyn to a big rally in the second half of his season debut, Kevin Durant had 39 and the Nets beat the Indiana Pacers 129-121. Irving is ineligible to play home games because he is not vaccinated as mandated in New York City, and the Nets had decided against allowing him to just play road games for most of the season. But they changed their mind last month and were glad they did Wednesday, when Irving helped them charge back from a 19-point deficit. The point guard played 32 minutes as Brooklyn snapped a three-game losing streak.

NHL – Blackhawks get Sam Lafferty from Penguins for Alex Nylander
The Chicago Blackhawks have acquired forward Sam Lafferty in a trade with the Pittsburgh Penguins for forward Alex Nylander. Lafferty is slated to join the slumping Blackhawks in Arizona. The 26-year-old Lafferty, who is signed through this season with a $750,000 salary-cap hit, has no goals and two assists in 10 games with the Penguins this season. Nylander has spent this season with Rockford of the American Hockey League, collecting eight goals and four assists in 23 games. Nylander was selected by Buffalo with the No. 8 pick in the 2016 draft.

NFL – Bears’ Nagy says he hasn’t been told finale is it for him
Chicago Bears coach Matt Nagy insists he has not been informed by his bosses that the season finale at Minnesota will be his last game leading the team. Nagy could be on his way out after four seasons with the Bears owning a 6-10 record heading into Sunday’s game. If he is, that would end a run that started on a promising note. The Bears won the division at 12-4 in 2018. But they declined after that. Nagy expects rookie quarterback Justin Fields to start against the Vikings after missing the past two games because of an ankle injury.

NFL – NFL looks at contingency sites for Super Bowl amid COVID-19
The NFL, not surprisingly in the midst of a rise in COVID-19 cases, has looked into other potential sites for next month’s Super Bowl. That’s not unusual because the league does so every year. But with Los Angeles the site for this year’s title game, and restrictions increasing for attendance at indoor events, it has become more noteworthy. Earlier Wednesday, the Grammy Awards were postponed indefinitely. They were scheduled for Crypto.com Arena in Los Angeles on Jan. 31. Organizers cited health and safety concerns. The game at SoFi Stadium is scheduled for Feb. 13.

NFL – Titans star running back Derrick Henry cleared to practice
The Tennessee Titans have made the easy move opening the 21-day window for Derrick Henry to practice with the team. The next decision and the timing is much more challenging. Taking the 2020 AP NFL Offensive Player of the Year off injured reserve by Sunday means he could help beat Houston and clinch the AFC’s No. 1 seed. Waiting means hoping the Titans earn the first-round bye without Henry giving him more time from Oct. 31 when he broke his right foot. Henry was the NFL’s leading rusher with 937 yards when he was put on injured reserve. He still ranks sixth in the league despite missing eight games.

NFL – NFL teams could lose draft pick for interview violations
The NFL has issued a warning to teams that they could lose a draft pick and face significant fines if club representatives conduct themselves unprofessionally in interviews with draft prospects. In a memo obtained by the AP that was sent to clubs, the league said a team would forfeit a draft pick between the first and fourth round and be fined a minimum of $150,000 if it’s determined a club representative displayed conduct that is “disrespectful, inappropriate, or unprofessional” during an interview. Fines and/or suspensions of individual club employees also could be imposed, according to the memo.

NFL – Antonio Brown says he was forced to play injured by Bucs
Antonio Brown says he was forced to play injured by the Tampa Bay Buccaneers, and that an MRI on Monday revealed damage to his ankle. While not specifying which ankle was hurt, Brown — through a statement released by his attorney on Wednesday — said the MRI showed broken bone fragments, a ligament tear and cartilage loss “which are beyond painful. You can see the bone bulging from the outside.” Bucs coach Bruce Arians said Monday that Brown did not claim he was injured when he refused to re-enter Sunday’s game at the Jets. Arians then told Brown to leave and the wide receiver did so by storming off the field, tossing some of his gear into the stands and waving to fans at MetLife Stadium. Brown told a different story in his statement.

Olympics – IOC assures teams Winter Olympics in Beijing will go ahead
The IOC has promised Olympic teams worldwide that the Winter Games in Beijing will go ahead as planned next month. Switzerland’s team leader asked a day earlier for talks about possibly postponing the Olympics because of the coronavirus pandemic. Swiss team leader Ralph Stöckli had said in a TV interview that the possibility of postponing had to be discussed amid rising numbers of athletes being infected with COVID-19. Stöckli says “the issue of a postponement is no longer relevant to all of us.” Last year’s Tokyo Olympics were held a year after their originally scheduled dates.