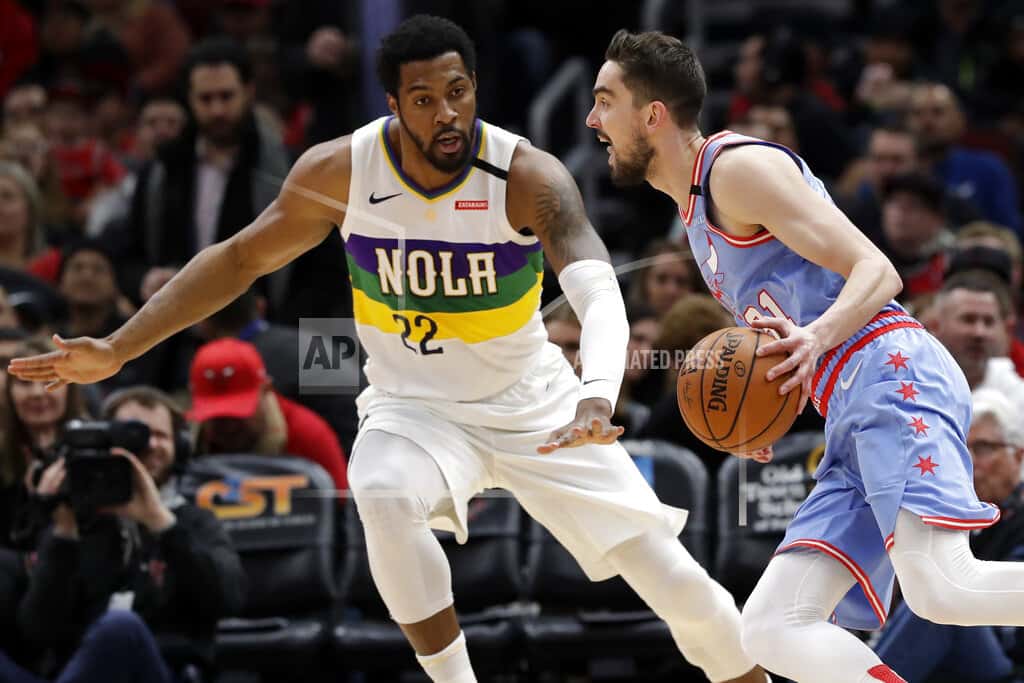 NBA
New Orleans 125, Chicago 119
Zion Williamson scored 21, JJ Redick added 18 points and the New Orleans Pelicans hung on to beat the Bulls 125-119. Williamson had nine points as New Orleans outscored Chicago 31-19 in the third quarter to break open the game. The Pelicans led by as much as 27 and withstood a big run down the stretch by the Bulls’ backups to come away with the win after back-to-back losses. Zach LaVine led Chicago with 22 points. Chandler Hutchison scored 16 to go with eight rebounds, and Adam Mokoka added 15 points — all in the fourth quarter. The rookie was even serenaded with “MVP! MVP!” chants in the closing minute as the Bulls whittled away the lead.

Off the Court…
In a trade just before yesterday’s deadline, Cleveland acquiring center Andre Drummond from the Pistons. The Cavs sent forward John Henson, guard Brandon Knight and one of their two second-round picks in 2023 to the Pistons for Drummond, who leads the league in rebounding this season. The Cavs needed help as they are just 13-39 and struggling under first-year coach John Beilein. While they pulled off one move, the Cavs held on to forward Kevin Love and Tristan Thompson. They were involved in numerous trade rumors in recent days.

NHL
Red Wings 4, Buffalo 3   SO
Dylan Larkin scored twice and converted one of Detroit’s two shootout goals, and the Red Wings snapped a nine-game skid with a 4-3 win over the Buffalo Sabres. Andreas Athanasiou sealed the victory by scoring on Detroit’s second shootout opportunity after Jonathan Bernier stopped Jack Eichel and Sam Reinhart on Buffalo’s first two attempts. Bernier finished with 29 saves through overtime and Tyler Bertuzzi also scored in a game the Red Wings rebounded after squandering a 2-0 third-period lead.

Off the ice…
Blackhawks defenseman Brent Seabrook is expected to be ready for the start of next season after undergoing right hip surgery yesterday.
The 34-year-old Seabrook also had right shoulder surgery in December and left hip surgery last month. The 6-foot-3 Seabrook has 103 goals and 361 assists in 1,114 games since his NHL debut in 2005, winning three Stanley Cups with the Hawks.

MEN’S COLLEGE BASKETBALL NEWS
Michigan guard Zavier Simpson reportedly crashed a vehicle registered to the wife of the Wolverines’ athletic director late last month, shortly before the school announced he was suspended for a game. MLive, citing a police report, reported that officers found Simpson outside the vehicle around 3 a.m. on Jan. 26. An officer said he did not notice any smell of intoxicant from Simpson’s breath. Simpson told police the car belonged to Evan Manuel, a student manager for the basketball team who is the son of athletic director Warde Manuel. Police said Chrislan Manuel, Warde Manuel’s wife and the registered owner of the car, spoke with Evan and told police that Simpson had been driving. Simpson received a citation for driving too fast for conditions.

BASEBALL
Baseball Commissioner Rob Manfred said roster decisions are a club right and applauded arbitrator Mark Irvings’ ruling against Cubs third baseman Kris Bryant. Bryant made his major league debut on April 17, 2015, and the Cubs’ timing left him able to accrue 171 days of major league service that season. That is one day shy of a full year of service and that pushed back his free-agent eligibility by one year, until after the 2021 season. Bryant filed a grievance, arguing the team violated baseball’s labor contract by intentionally delaying his free-agent eligibility. But the arbitrator ruled against him.