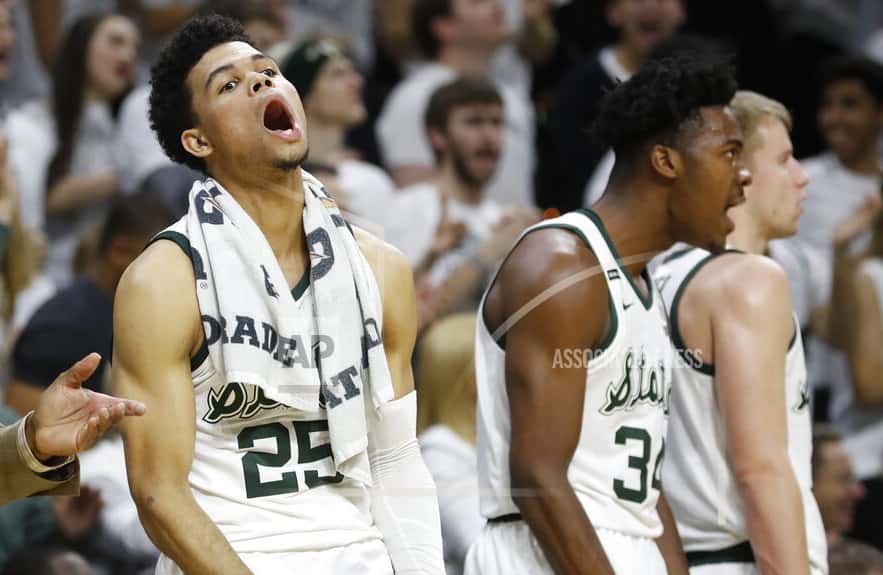 MEN’S COLLEGE BASKETBALL
Michigan State 79, Northwestern 50
Cassius Winston scored 18 points and Xavier Tillman had 12 points, eight rebounds and four assists to lead No. 14 Michigan State in a 79-50 win over Northwestern. The Spartans moved into sole possession of first place in the Big Ten on Wednesday night. The lead in the conference may last only a day because No. 19 Illinois has a chance to pull into a tie tonight at home against Minnesota. Pat Spencer scored 11 points for the last-place Wildcats and was their only double-digit scorer in a game they never led.

NBA
Indiana 115, Chicago 106   OT
Victor Oladipo’s only 3-pointer of the game tied the score with 10 seconds left in regulation and the Pacers pulled away in overtime for a 115-106 victory over the Bulls. Oladipo finished with nine points in his first game in over a year. T.J. Warren led the Pacers with 25 points. Domantas Sabonis had 15 points and 11 rebounds as Indiana won for the eighth time in 10 games. Chandler Hutchinson scored a career-high 21 points and Zach Lavine had 20 to lead the Bulls. Chicago has lost eight straight to the Pacers.

Brooklyn 125, Detroit 115
Spencer Dinwiddie scored 28 points in his first game with his new jersey number, Kyrie Irving returned to the lineup to score 20 and the Brooklyn Nets beat the Pistons 125-115. Irving didn’t play Sunday at New York after learning of Kobe Bryant’s death, and Dinwiddie was in tears after the game talking about what the Lakers star meant to him. Dinwiddie changed his number from No. 8, one of the numbers Bryant wore, to No. 26 on Tuesday. Reggie Jackson scored 23 points during one the best games of his injury-plagued season and Derrick Rose had 22 for the Pistons.

BASEBALL
All-Star third baseman Kris Bryant has lost his service-time grievance against the Cubs. Two people with direct knowledge of the situation confirmed the decision to The Associated Press. Bryant argued he was held in the minors in a deliberate effort to delay his free-agent eligibility. The decision provides some clarity for the Cubs. Bryant could be traded now that his status has been settled, or the team could keep the 2016 National League MVP.