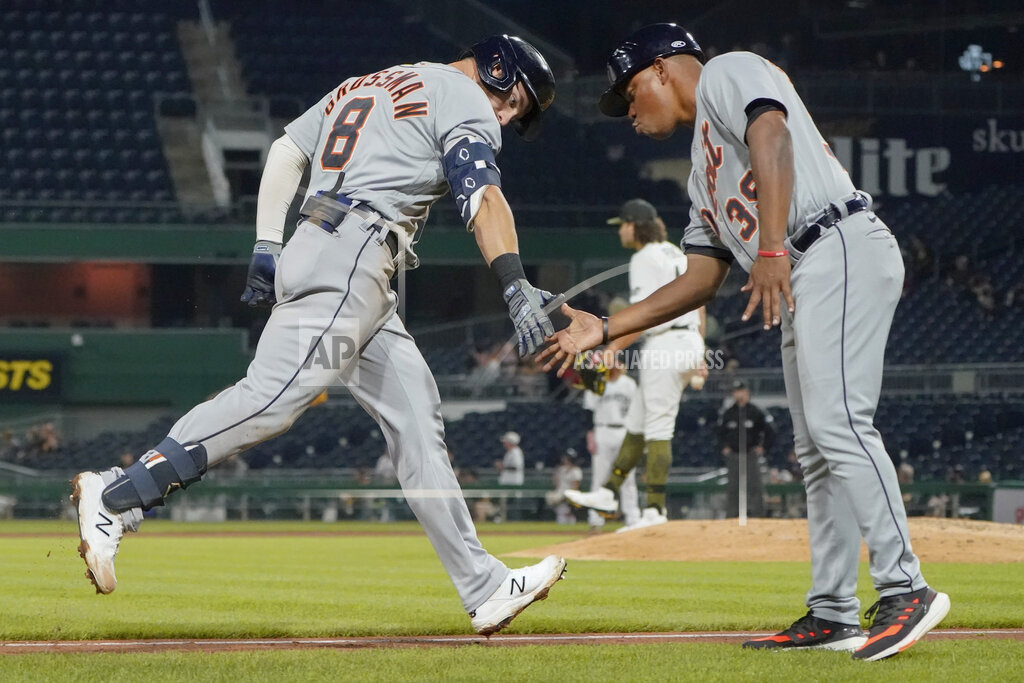 Tigers 5, Pirates 1 – Cabrera, Grossman power Tigers past Pirates 5-1
Miguel Cabrera and Robbie Grossman each had four hits, and the Detroit Tigers avoided a sweep by beating the Pittsburgh Pirates 5-1. Cabrera was 4 for 4 with a double and three RBIs. He doubled off the Clemente Wall in right field to score Grossman in the first, singled home Akil Baddoo in the third and bounced one up the middle in the fifth to bring in Jonathan Schoop. Grossman was 4 for 5 and scored three runs. He singled in his first three at-bats and hit a solo home run just inside the right field foul pole in the seventh.

Cubs 4, Reds 1 – F/10 – Heyward’s walk-off HR in 10th gives Cubs 4-1 win over Reds
Jason Heyward hit a three-run homer in the bottom of the 10th inning to give the Chicago Cubs a 4-1 win over the Cincinnati Reds for their eighth victory in nine games. Ian Happ homered for the third straight game, extending his hitting streak to a career-high nine games and helping the Cubs win their third consecutive series. Joey Votto launched his 29th homer of the season, but his fourth-inning solo shot was all the offense Cincinnati could muster. The Reds have lost four of six as they fight for a playoff spot. They entered the day tied with San Diego for the 2nd NL wild card.

A’s 5, White Sox 1 – Chapman homers, Montas shuts down White Sox as A’s end skid
Matt Chapman homered early, Frankie Montas won his third straight start and the Oakland Athletics beat the Chicago White Sox 5-1 to snap a four-game losing streak. Montas allowed one run and six hits with seven strikeouts and two walks in seven innings. He had lost his only regular-season appearance against the White Sox last month. Chad Pinder drove in a run with a triple. Yan Gomes and Elvis Andrus each had an RBI single for the A’s, who drew a crowd of 8,147 as they try to stay in the playoff race. Oakland got to Dallas Keuchel early and the Chicago lefty lost his third straight. Keuchel allowed five runs and eight hits over 5 2/3 innings.

Today
Chicago White Sox at Oakland Athletics, 3:37 p.m.
Tigers and Cubs are off

MLB – White Sox LF Eloy Jiménez hit in knee by foul ball in dugout
White Sox left fielder Eloy Jiménez severely bruised his right knee when he was hit by a foul ball while sitting in the dugout during the second inning of a game at Oakland and is day to day. Jiménez stayed in the game initially before a slide into home plate in the fifth increased his knee pain, prompting him to leave what turned into a 6-3 victory. X-rays were negative but Jiménez was held of Chicago’s lineup Wednesday night. He didn’t test it out, saying, “today’s just rest.”

MLB – Yankees star Derek Jeter inducted into Baseball Hall of Fame
Former Yankees shortstop and captain Derek Jeter, Colorado star Larry Walker, Ted Simmons of the Cardinals and Brewers, and the late labor executive Marvin Miller have been inducted into the Baseball Hall of Fame. Jeter missed by one vote of being a unanimous pick in his first year on the ballot, but that was far from his mind on this day. Jeter noted at the start of his speech that 10 Hall of Famers had died in the past 20 months. He was greeted by a sea of Yankees fans for a ceremony that was changed to mid-week in September from its customary spot on a Sunday in late July because of the pandemic.

NCAA – Michigan State football, basketball players to get $6,000
A suburban Detroit mortgage company led by a former Michigan State walk-on will pay $500 a month to all football players and members of the men’s basketball team. The sponsorship by Mat Ishbia and United Wholesale Mortgage will provide more than 130 athletes with $6,000 a year. The NCAA in July said athletes could be paid for their name, image or likeness. The players will be paid for promoting the company on social media. Ishbia was a walk-on who was a member of Michigan State’s 2000 national championship basketball team. In February, Ishbia announced a $32 million donation to MSU’s athletic program.

NFL – Brady, Buccaneers begin defense of title against Cowboys
Lofty expectations don’t faze Tom Brady and the Tampa Bay Buccaneers. The reigning Super Bowl champions open the 2021 season against the Dallas Cowboys on Thursday night, confident they have everything it takes to become the first team to win back-to-back titles since Brady led the 2003 and 2004 New England Patriots to consecutive crowns. The Bucs return all 22 starters from a top 10 offense and defense, however Brady and coach Bruce Arians stress talent alone doesn’t guarantee continued success. The Cowboys are coming off a 6-10 finish in which they played most of the season without quarterback Dak Prescott. Prescott returns for the opener.

NFL – Bears’ Dalton focused on Rams defense, not Justin Fields
Chicago Bears veteran quarterback Andy Dalton has plenty to worry about from the Los Angeles Rams defense and Aaron Donald on Sunday night in the season opener, but there could also be something else behind him of concern in the form of rookie teammate Justin Fields. Dalton has been promised the starting quarterback job since signing in March as a free agent, but how long he keeps it depends on his performance and Fields’ abilities have him poised to take over if coach Matt Nagy decides to turn this way.

NFL – Rodgers says uncertain future doesn’t create extra pressure
Packers quarterback Aaron Rodgers acknowledges this season feels different because of the uncertainty surrounding how much longer he and some teammates might remain in Green Bay. But Rodgers doesn’t believe those questions will hinder his focus as the reigning MVP heads into his 17th season with the Packers. The Packers open their season Sunday against the New Orleans Saints at Jacksonville, Florida. Green Bay has lost in the NFC championship game each of the last two years.

FIFA – Pepi, US beat Honduras 4-1 in World Cup qualifier
Antonee Robinson and Ricardo Pepi scored their first international goals after a halftime change in formation, Brenden Aaronson and Sebastian Lletget added late goals and the United States revived its World Cup qualifying campaign with a 4-1 win over Honduras. U.S. captain Christian Pulisic joined the lengthy American injured list, limping off in the 60th. Brayan Maya put Honduras ahead in the 27th minute of a one-sided first half as the Catrachos dominated before a horn-blowing full house at Estadio Olimpico Metropolitano. Robinson scored in the 48th minute and Pepi, starting in his international debut, in the 75th.

Former Notre Dame football star, coach Brennan dies at 93
Former Notre Dame star football player and coach Terry Brennan has died. The school made the announcement on Wednesday. Brennan died on Tuesday at age 93. Brennan was a halfback on three unbeaten teams for Notre Dame in the late 1940s and helped lead the Irish to a pair of national championships. He was just 25 years old when he succeeded Irish coaching great Frank Leahy for the 1954 season. Brennan’s teams went 32-18 in five seasons, including a 7-0 upset of Oklahoma in 1957 that ended the Sooners’ record winning streak at 47 games.

Tennis – US Open – Semis set
Olympic gold medalist Alexander Zverev has made it back to the U.S. Open semifinals a year after finishing as runner-up. The 24-year-old from Germany saved a set point in the opener and wound up beating unseeded Lloyd Harris 7-6, 6-3, 6-4. Zverev will take a 16-match winning streak into his contest against Novak Djokovic.  Emma Raducanu has become the second teenager in two days to reach the U.S. Open semifinals. The 18-year-old qualifier from Britain upset Olympic gold medalist Belinda Bencic 6-3, 6-4. Raducanu joins Leylah Fernandez of Canada, who earned her semifinal spot a day after her 19th birthday.