It’s no secret that the SEC has been put on a high plateau that nobody could even come close to reaching for more than a decade in College Football.

Between Alabama, Auburn, and LSU, the SEC has been crowned kings of the hill in College Football. The SEC could do no wrong. Florida State’s win in last year’s BCS championship over Auburn was seen a fluke and the SEC would be back on top again this year.

After all, Alabama was the number one seed in the all new College Football Playoff. Earlier this season, the talk was not about who would be number one seed, but how many SEC teams were going to make up the four teams in the playoff.

Alabama for sure, but Mississippi State, Ole Miss, and even Auburn all were thought of at a point to be in line for the playoff. But something happened on the way to the playoffs.

Ole Miss, Mississippi State, and Auburn faltered down the stretch and only Alabama was left standing in the SEC.

Then we look at the Big Ten. Forgotten and written off for more than a decade. The Big Ten was washed up and not even on the same level as the all mighty SEC, not even able to compete with the PAC 12, ACC, and even the Big 12. Some even questioned that the MAC was getting better than the Big Ten.

Michigan State lost early to Oregon, Ohio State fell at home to unranked Virginia Tech. Michigan was losing to everybody. The Big Ten was written off after just three games while the SEC kept rolling along.

MSU and Ohio State was the only real Big Ten game left that meant anything, it would just determine who would play in the Big Ten’s championship game, and maybe get a spot in a New Year’s Day bowl game, but never the final four.

They wrote off Ohio State after losing their top two quarterbacks. A third string quarterback led the Buckeyes to a 50+ point blowout of Wisconsin in the Big Ten title game. But Ohio State got the fourth seed in the playoff, much to the dismay of Baylor and TCU who tied for the Big 12 conference title. But it was seen as another chance for the mighty SEC to trounce the Big Ten once again. Michigan State was set up against Baylor, in the Bears home state. Even Wisconsin was pitted against SEC powerhouse Auburn.

The Big Ten went x-x in their bowl games, not counting the national championship game which is on the 12th.

The winds of Division 1 College Football have definitely turned towards the midwest once again, with the wins by Ohio State, Michigan State, and Wisconsin. But that slight breeze was turned into a major gust when Michigan hired Jim Harbaugh as the head coach. Those top recruits that floated towards the SEC, ACC, and even Notre Dame are starting to look back at the Big Ten and Michigan.

The Big Ten turnaround has begun.

I’ll close with this… former Florida State quarterback Danny Kanell summed up how bad the Alabama loss means for the SEC in general. His tweet after the OSU win pretty much summed up and sticks it to the ESPN run, SEC Network. 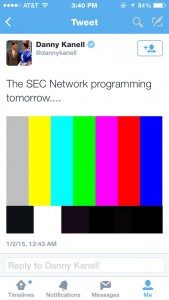