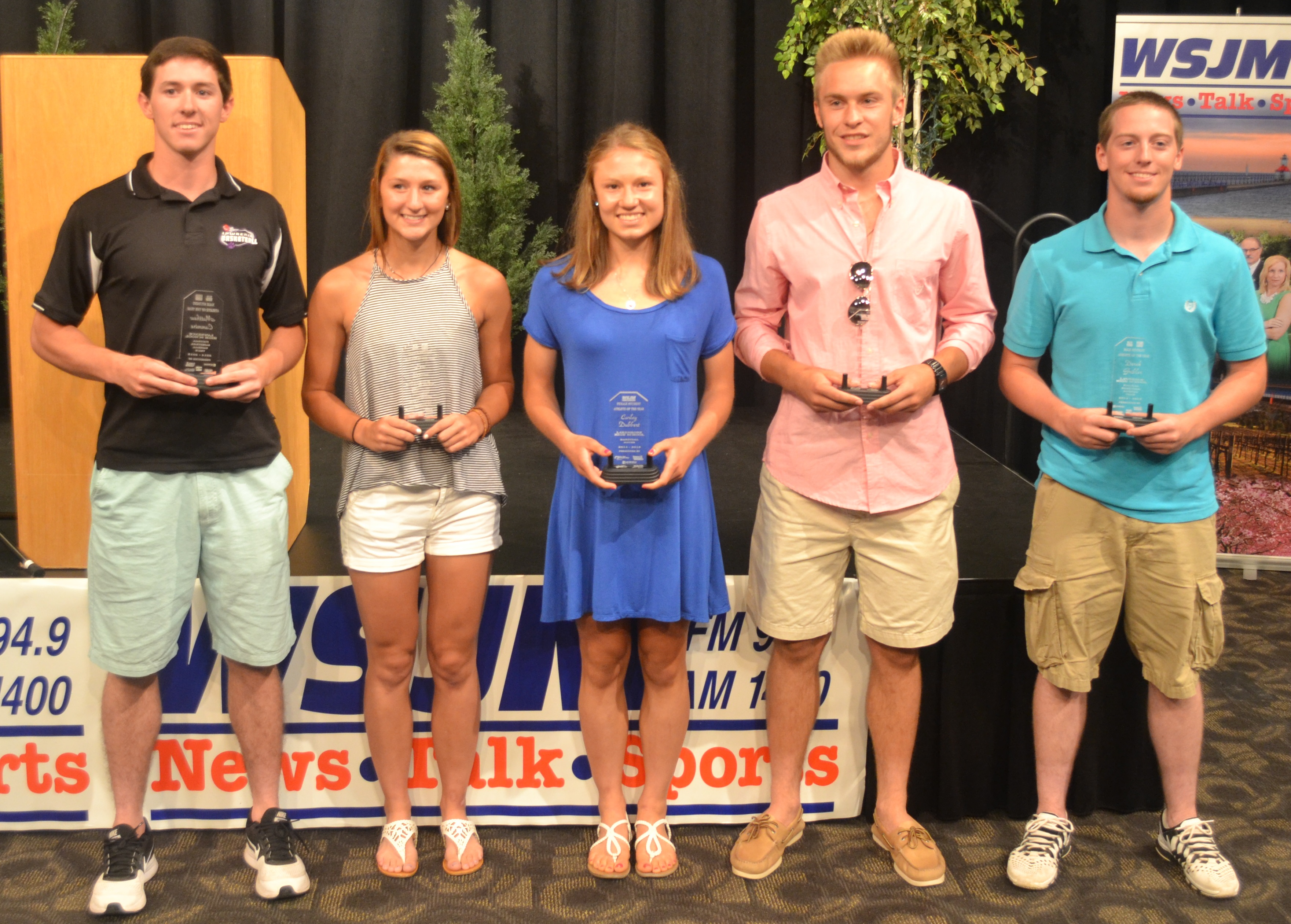 The Sports Radio 1400 WSJM Student Athlete of the Year Awards were presented tonight at the Mendel Center at Lake Michigan College. For the first time, the awards for both Berrien and Van Buren/Cass Counties were presented at the same time.

Seniors Andrew Duckett, of Brandywine High School, and Carley Dubbert, from Lakeshore High School, were named as the Berrien County Student Athletes of the Year.

Andrew played football, basketball and was on the track team. In football, he was the team captain for three years. In his senior year, he earned both the All-Conference and All-State honors.

In his senior year alone, Andrew passed for 1,100 yards and 18 touchdowns, and rushed for 1,000 yards and 11 more touchdowns.  On defense, he recorded 49 tackles.  He also broke several school records in football.

In basketball, Andrew played on the varsity team for three years, and was the team captain for two.  This past season, he also earned All-Conference honors.

Andrew was a member of the National Honor Society and finishes high school with a 3.6 GPA

Carley played soccer at Lakeshore, where she moved to the forward position her senior year, after playing midfield the previous three years. In her senior year, she scored 22 goals and had 10 assists, and was the captain of the team.  She earned All-Conference, All-District, All-Region, and All-State honors.

Brian Samuel, head coach of the Lakeshore boys and girls varsity soccer teams, said that Carley is one of the best athletes he’s coached in his career. “Carley is an amazing student athlete. She is the hardest worker I have coached in my 19 years.”

Carley also played basketball at Lakeshore, where she earned All-Conference honors.  In her senior year she averaged 8.9 points and six rebounds per game.

She was a four year letter winner in both soccer and basketball.

Carley was also a member of the National Honor Society, Student Council, and Young Life.  She finishes high school with a 4.36 GPA.

Benton Harbor Girls Basketball Coach Lisa Harvey-Gondrezick was named the Berrien County Coach of the Year. In her fifth season guiding the Tigers, Lisa led them to Class B District and Regional Championships. They followed that up with a win in the State Quarterfinal and a trip to the State Semi-Finals. Benton Harbor ended the season with a record of 20-6.

In Van Buren/Cass County, senior Lexi Cerven of Decatur High School was awarded Student Athlete of the year, along with seniors Derek Gribler and Matt Cammier of Lawrence High School.

Lexi played volleyball, basketball, softball and was a power lifter. In volleyball, she led the team in kills her senior year and earned All-Conference, All-State and Academic All-State honors.

In basketball, Lexi led the team in total points and steals, and earned All-Conference, All-State, and Academic All-State honors.

In softball, she has earned All-District and All-Region honors

In power lifting, Lexi was the state champion and set a state record in the dead lift at 295 pounds.

Lexi was a member of the National Honor Society.  She finishes high school with a 3.763 GPA.

Matt and Derek both played football, basketball, baseball, and ran track.  They were varsity starters in each sport for all four years. In football, Matt had 59 receptions for 1,295 yards and 26 touchdowns while receiving All-State Honors. Derek threw 43 touchdowns and had a QB rating of 140. He was also named Division 9 Player of the Year.