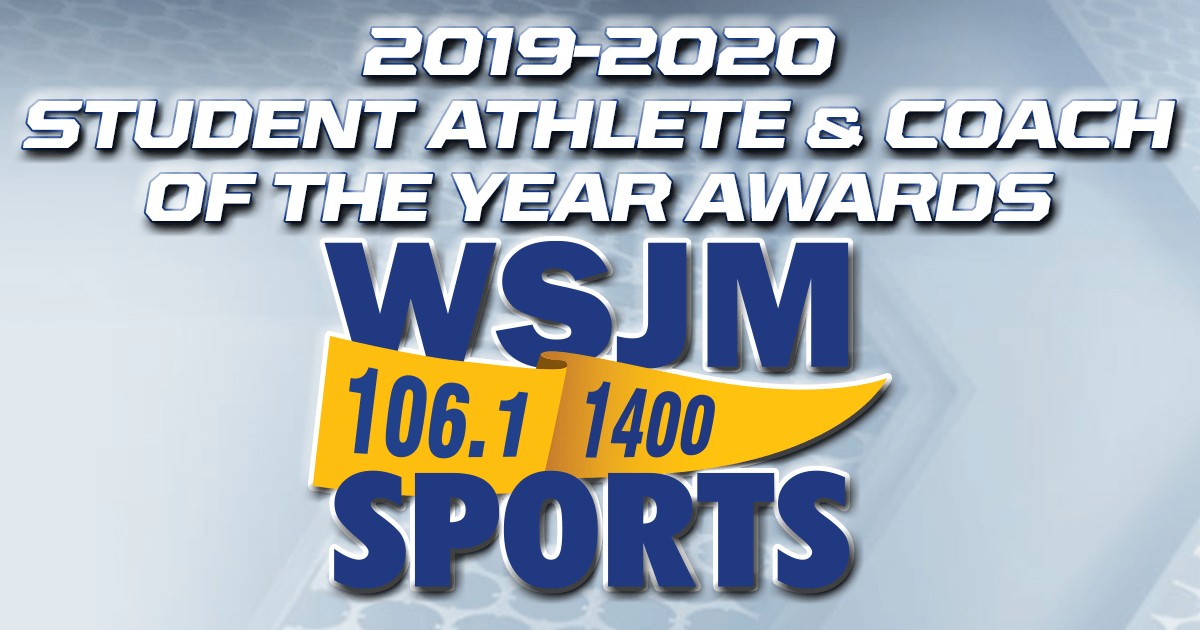 See the video presentation of all of our winners by clicking here.

Carlos Johnson of Benton Harbor High School is the WSJM Sports Berrien County Male Student Athlete of the Year. Carlos finished a record breaking career as a member of the Tigers’ Basketball team.
Carlos became the all-time leading scorer in Benton Harbor school history, finishing with 1,940 points.
This season, he averaged 25.3 points, 11.6 rebounds, 6.1 assists, 5.3 blocks, and 3.6 steals per game.
Carlos was named Mr. Basketball for the state of Michigan and earned 1st Team All-State honors for a fourth straight year. He will continue his academic and basketball career at Butler University.
Carlos also volunteered with the Boys & Girls Club of Benton Harbor. In the classroom, he graduates with a 4.0 grade point average.
Carlos is the son of Racheal Smith and Carlos Johnson Sr.

Mara Rugen of Michigan Lutheran High School is the WSJM Sports Berrien County Female Student Athlete of the Year. Mara was a member of the Titans’ Volleyball and Basketball teams.
In basketball, Mara was voted as the team’s Most Valuable Player and Co-Best Defensive Player. She earned First Team BCS White Division All-Conference honors and was named the BCS White Division Player of the Year. She went on to also earn Associated Press First Team All-State, BCAM (Basketball Coaches Association of Michigan) First Team All-State, and BCAM Individual Academic All-State honors.
In volleyball, Mara led the Titans in kills, was second on the team in digs, and finished with a 90% serving percentage. She also earned All-Conference honors.
Mara was also a member of the Student Council, National Honor Society, and Interact Club, and served as a Student Ambassador. She graduates with a 3.89 grade point average.
Mara is the daughter of Glen and Mary Rosenbaum.

Bridgman Cross Country coach Spencer Carr is the WSJM Sports Berrien County Coach of the Year.
Coach Carr guided the Bridgman girls’ team to the Division 4 State Championship, the first girls’ team state championship in school history. Leading up to that, the Bees captured their fifth straight BCS Conference Championship and first ever girls’ cross country regional championship. He guided the Bridgman boys’ team to a second place finish in the conference and a second place finish at regionals, qualifying for the state finals.

Jared Checkley of Decatur High School is the WSJM Sports Van Buren/Cass Male Student Athlete of the Year. Jared was a member of the Raiders’ football and wrestling teams.
Jared led the Decatur football team with 142 tackles, including 24 sacks. He added five fumble recoveries and one interception. He ended the season becoming the school record holder for career tackles. On offense, he finished the year with 258 rushing yards and 184 receiving yards. He earned 1st Team All-Conference Offense and 1st team All-Conference Defense honors all four years and was All-State Honorable mention for two years.
On the wrestling mat, Jared finished with a 43-6 record this season and a 172-29 career record. He is a three time state placer and earned 1st Team All-Conference and Academic All-State honors this past season.
Jared was also a member of the National Honor Society and served as President of the Student Council. He graduated with a 3.49 grade point average.

South Haven Wrestling coach Brad Adamson is the WSJM Sports Van Buren/Cass Coach of the Year. This was Coach Adamson’s fourth year as the team’s head coach. When he took over the program, they had only four wrestlers on the team that first year. This past season, the rams had over twenty wrestlers on the team. They won their own South Haven Invitational as well as the Galesburg-Augusta Team Invitational. South Haven finished third in the Wolverine Conference, narrowly losing to conference powers Dowagiac and Edwardsburg. Coach Adamson was named as Wolverine Conference Coach of the Year. The Rams won their district and advanced to the team regional competition, where they lost to the eventual Regional Champion Dowagiac by one point.
Individually, six wrestlers made it to Regionals and three to the MHSAA State Tournament.