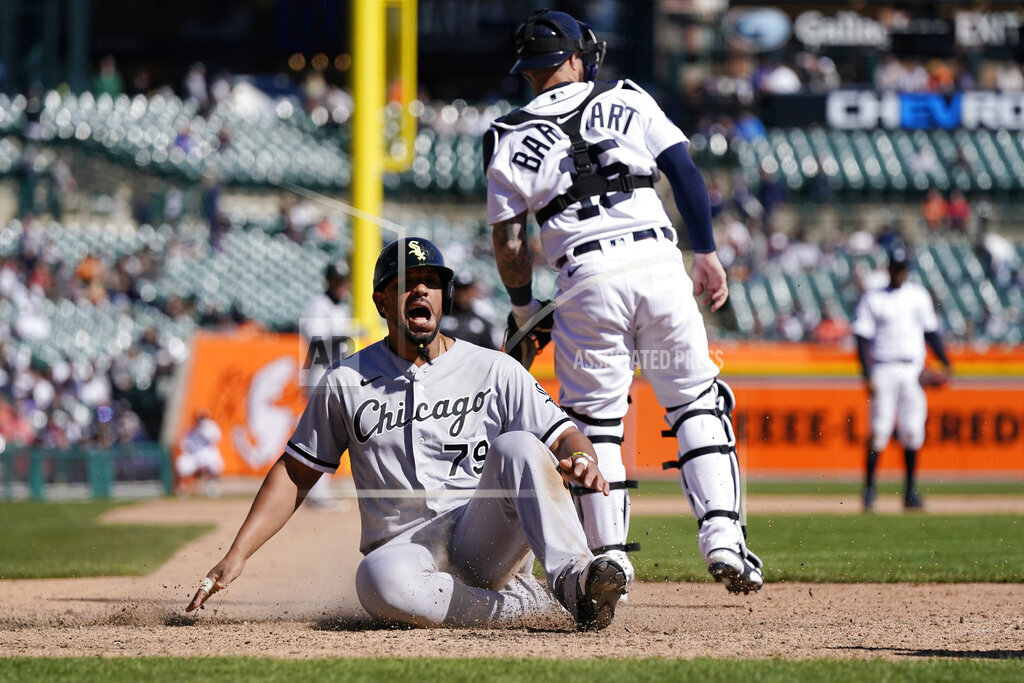 White Sox 10, Tigers 1 – Back from suspension, Anderson helps White Sox rout Tigers
Tim Anderson swung right back into action after serving a suspension stemming from an incident last season, hitting two doubles and a single as the Chicago White Sox routed the Detroit Tigers 10-1. Andrew Vaughn homered and drove in four runs for the White Sox, who won twice in the season-opening three-game series. Anderson sat out the first two games as a penalty for making contact with an umpire on Sept. 27. The All-Star shortstop and 2019 AL batting champion made an immediate impact, hitting a double on the first pitch of the game. He wound up scoring twice for the AL Central champions.

Brewers 5, Cubs 4 – Brosseau’s pinch-hit HR sends Brewers past Cubs for 1st win
Mike Brosseau’s first career pinch-hit homer snapped a tie in the seventh inning, and the Milwaukee Brewers beat the Chicago Cubs 5-4 for their first victory of the season. Willy Adames and Rowdy Tellez also went deep, helping the reigning NL Central champions overcome a shaky performance by starter Freddy Peralta. Christian Yelich had two hits, and Josh Hader pitched a 1-2-3 ninth for his first save. Seiya Suzuki hit his first major league homer for Chicago, and Marcus Stroman pitched five effective innings in his Cubs debut. The Cubs were trying to go 3-0 for the first time since 2016.

MLB – Manfred gifts players headphones as lockout peace offering
Baseball Commissioner Rob Manfred gave major league players Bose headphones on opening day as a peace offering after a bitter 99-day lockout that delayed the start of the season. Major League Baseball confirmed that headphones and a letter signed by Manfred were left at the locker of each player when teams began their seasons Thursday and Friday. The present was first reported by The Athletic. Manfred’s relationship with players has grown increasingly icy since he succeeded Bud Selig as commissioner in 2014. At the news conference announcing an agreement with the union to end this winter’s lockout, Manfred admitted that he’s failed in his role as a diplomat to players and pledged to improve the relationship.

Golf – The Masters – Scheffler closes out Masters win
Scottie Scheffler has lived up to the hype at Augusta National. The world’s top-ranked player captured his first major championship with a three-stroke victory at the Masters. Scheffler came into the day with a three-shot lead, and he made sure it held up by closing with a 1-under 71. He finished at 10-under 278 overall, winning for the fourth time in his last six tournaments. Scheffler four-putted for a double-bogey at the final hole, but he had such a comfortable lead it didn’t matter. Rory McIlroy was the runner-up after shooting 64, but he came into the day 10 strokes behind and was never a serious challenger to Scheffler.

Stars 6, Blackhawks 4 – Robertson scores twice in Stars’ 6-4 win over Blackhawks
Jason Robertson scored his team-leading 33rd and 34th goals about three minutes apart, and the Dallas Stars strengthened their hold on a wild-card spot with a 6-4 win over the Chicago Blackhawks. Roope Hintz had a goal and two assists, and Joe Pavelski, Tyler Seguin and Jamie Benn each added a goal and an assist for Dallas. The Stars moved two points ahead of Vegas for the second Western Conference wild card. Jake Oettinger made 36 saves. Philipp Kurashev, Jonathan Toews, Kirby Dach and Boris Katchouk scored for Chicago. Kevin Lankinen allowed five goals on 20 shots and was replaced at the start of the third by Collin Delia, who had nine saves.

Sixers 118, Pistons 106 – 76ers win without Embiid, Harden, earn No. 4 seed in East
Joel Embiid sat out after he clinched the scoring title and James Harden joined him on the bench, leaving Shake Milton and Tyrese Maxey to lead the Philadelphia 76ers to a 118-106 win over the Detroit Pistons on Sunday night. The Sixers clinched the No. 4 seed in the Eastern Conference playoffs and will open against Toronto. Milton scored 30 points, and Maxey and Paul Reed each scored 25 for the Sixers. Luka Garza led the Pistons with 20 points and 10 rebounds.

Bulls 124, T-Wolves 120 – Bulls beat Wolves 124-120 behind Patrick Williams’ 35 points
Patrick Williams scored a career-high 35 points and Ayo Dosunmu had 26 points in a season-high 45 minutes, as the Chicago Bulls hung on for a 124-120 victory over the Minnesota Timberwolves. Both teams were in rest-the-regulars mode in preparation for the postseason. The Bulls played without four starters. They already had the No. 6 seed secured in the Eastern Conference and play the defending champion Bucks in the first round. The Wolves didn’t use any starters in the second half. They face the Clippers in a Western Conference play-in game next.

Nets 134, Pacers 126 – Nets beat Pacers to lock up 7th, host play-in game Tuesday
Kyrie Irving scored 35 points, Kevin Durant had 20 points, a career-high 16 assists and 10 rebounds, and the Brooklyn Nets locked up seventh place in the Eastern Conference with a 134-126 victory over the Indiana Pacers. The Nets will host No. 8 Cleveland on Tuesday in the play-in tournament, with the winner moving into the playoffs as the No. 7 seed. The loser will have a second chance by hosting the winner of the game between the Nos. 9 and 10 seeds on Friday. Brooklyn and Cleveland both finished 44-38, but the Nets won the season series to take the tiebreaker.

NBA – The play-in games are set, as NBA looks to the postseason
It lasted 174 days, required the usage of more players than any season in history primarily because of the ongoing challenge of playing through a pandemic, and saw playoff-positioning chases go all the way down to the final moments. Now, move over, regular season. The NBA’s postseason is finally here. The Eastern Conference play-in games were set on Sunday. Brooklyn will play host to Cleveland and Atlanta will entertain Charlotte. The Nets-Cavs winner goes to the playoffs; the loser plays the Hawks-Hornets winner for the No. 8 seed.

NCAAHKY – Beniers joins Kraken; latest Michigan star to jump to NHL
The Seattle Kraken agreed to terms with top prospect Matty Beniers. He is expected to join the team immediately. Beniers was the second pick in the 2021 draft and the first selection in the expansion franchise’s history. The playmaking center had two points in four games with the U.S. at the Beijing Olympics. Beniers joins Michigan teammates Owen Power, Kent Johnson and Nick Blankenburg jumping to the NHL immediately after their college season ended. Vegas prospect Brendan Brisson could be next.