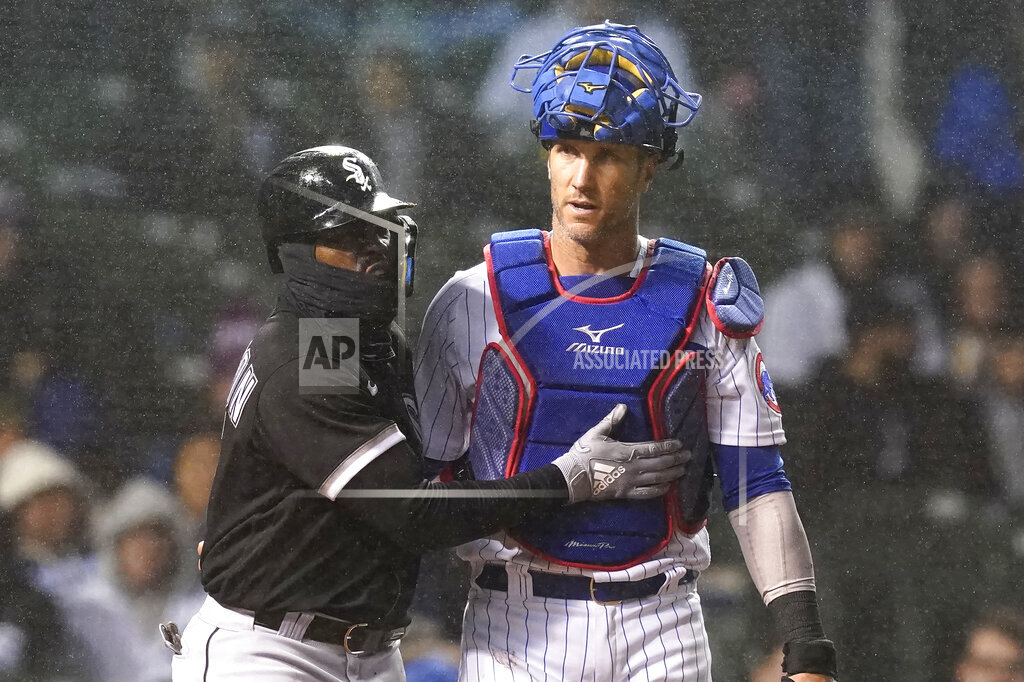 White Sox 3, Cubs 1 – Anderson homers as White Sox beat Cubs 3-1 at rainy Wrigley
Tim Anderson homered and José Abreu made two nice plays at first base, helping the Chicago White Sox beat the Chicago Cubs 3-1 at rainy, chilly Wrigley Field. Looking to dig themselves out of a rough start, the banged-up White Sox won for the third time in four games. Michael Kopech pitched four-plus scoreless innings, and Jake Burger had two hits. Anderson led off the third with a drive to right-center on Keegan Thompson’s first pitch of the inning, making it 3-0 with his fourth homer. The dynamic shortstop is batting .359 in his last 10 games.

MLB – Cubs place LHP Drew Smyly on bereavement list
The Chicago Cubs have placed left-hander Drew Smyly on the bereavement list and brought up right-hander Robert Gsellman from Triple-A Iowa. Smyly was slated to start against the Chicago White Sox at Wrigley Field. Right-hander Scott Effross got the call instead, beginning a bullpen day for the Cubs. Left-hander Locke St. John was designated for assignment. He was optioned to Iowa on Sunday.

MLB – From stadium to sea, LA Dodgers unveil All-Star Game plans
The Los Angeles Dodgers have unveiled plans for this summer’s MLB All-Star Game. The franchise will be hosting for the first time since 1980. Dodger Stadium, LA Live in downtown Los Angeles and the Santa Monica Pier will be backdrops for events running from July 15 to July 19. The Dodgers plan to honor Jackie Robinson, who broke baseball’s color barrier with the franchise 75 years ago. His widow, Rachel, turns 100 on July 19, the same day as the All-Star Game. The Home Run Derby is July 18.

NHL – Derek King remains in running for Blackhawks coaching job
Blackhawks general manager Kyle Davidson says interim coach Derek King remains in the running for the full-time job. The Blackhawks announced over the weekend that assistants Marc Crawford and Rob Cookson will not return to the organization next season. But Davidson says that doesn’t impact King’s situation at all. Davidson, who took over as general manager when the team dropped his interim tag on March 1, says he would like to hire a head coach by mid-July.

NFL – Bears appoint King, Koziol co-directors of player personnel
The Chicago Bears have appointed Jeff King and Kansas City Chiefs executive Trey Koziol co-directors of player personnel under new general manager Ryan Poles. King was a tight end who played seven seasons in the NFL with Carolina and Arizona after starring at Virginia Tech. He started as a scouting intern for the Bears in 2015. He was hired full time in 2016 as a pro scout and got promoted to assistant director of pro scouting in 2019 under former GM Ryan Pace. Koziol is from the Chicago area and has 14 years of front office experience with Tennessee and Kansas City. He joined the Chiefs in 2013 as an area scout and spent the past year as assistant director of college scouting. He and Poles worked together in Kansas City. and were college teammates at BC.

NFL – Tannehill: Divisional loss left Titans QB with ‘deep scar’
Sleepless nights. Rewinding the loss in his mind over and over again. Therapy sessions as well. And weeks and weeks of time. Ryan Tannehill has lost big games before. Losing as the AFC’s No. 1 seed with the Titans quarterback throwing three interceptions left him with what he called a “deep scar.” Tannehill said he was in a dark place. Tannehill talked to reporters Tuesday for the first time since the Titans’ loss to the Cincinnati Bengals in January. He also called the trade of his top target A.J. Brown shocking because he expected an extension keeping the receiver in Tennessee.

NFL – First Asian American among NFL’s 10 new on-field officials
The NFL has hired 10 new on-field officials, including the first Asian American to officiate in the league and a former player. Lo van Pham joins the NFL from the Big 12 Conference. He was born in Vietnam and after a stop in the Philippines, moved to the United States when he was seven. Mike Morton becomes the third former NFL player on the 2022 roster of officials, joining Nate Jones and Terry Killens. Morton was drafted in the fourth round in 1995 by the Raiders, and was a linebacker for them from 1995-98. He also played in St. Louis, Green Bay (2000), and Indianapolis during his seven-year NFL career.

NCAAHKY – Michigan State hires Adam Nightingale to lead hockey program
Michigan State has hired hockey coach Adam Nightingale. The former player for the Spartans led USA Hockey’s development program for two years and was a Detroit Red Wings assistant for a season. Athletic director Alan Haller made the announcement Tuesday. Nightingale replaces Danton Cole after he was 58-101-12 over five seasons. Haller says Nightingale has a passion for the school and the program and has a strong combination of skill development, player development and recruiting ties”

WNBA – State Dept.: Brittney Griner considered wrongfully detained
The State Department says it has determined WNBA star Brittney Griner is being wrongfully detained in Russia. That means the U.S. will more aggressively work to secure her release while the legal case against her plays out. Griner was detained at an airport in February after Russian authorities said a search of her bag revealed vape cartridges containing traces of cannabis oil. U.S. officials previously stopped short of classifying the Phoenix Mercury player as wrongfully detained. The president of the WNBA players’ union says it’s time for Griner to “come home.”

Horse Racing – Mo.-based company hired to police drugs in US horse racing
A deal for Drug Free Sport International to police medication in horse racing is in place two months before the Horseracing Integrity and Safety Authority takes effect. The Kansas City, Missouri-based company has overseen testing and enforcement with the NFL, NBA, MLB and NCAA. The Horseracing Integrity and Safety Authority takes effect July 1. The anti-doping and medication rules aren’t expected to begin until early next year, which leaves the 38 states where horse racing occurs in charge for now. Drug Free Sport International will oversee an integrity and welfare unit that will be led by Jonathan Taylor, a British attorney.