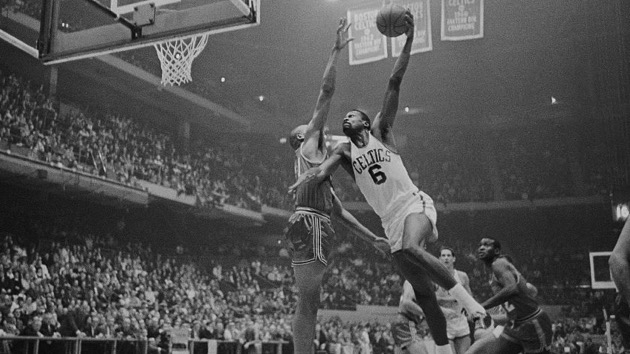 The Boston Celtics legend, who won 11 NBA championships as a player, including two as a player-coach, on his way to the Hall of Fame, has died at the age of 88, his family announced Sunday.

The family said Russell died peacefully with his wife, Jeannine, by his side. Arrangements for his memorial service will be announced soon, the statement said.

NBA Commissioner Adam Silver issued a statement calling Russell “the greatest champion in all of sports.”

“The countless accolades that he earned for his storied career with the Boston Celtics — including a record 11 championships and five MVP awards – only begin to tell the story of Bill’s immense impact on our league and broader society,” Silver said.

“At the height of his athletic career, Bill advocated vigorously for civil rights and social justice, a legacy he passed down to generations of NBA players who followed in his footsteps” Silver added. “Through the taunts, threats and unthinkable adversity, Bill rose above it all and remained true to his belief that everyone deserves to be treated with dignity.”

Silver said that in the 35 years since Russell completed his trailblazing career as the NBA’s first Black head coach, he continued to attend every major NBA Event, including the NBA Finals, where he presented the Finals MVP trophy that was renamed for him in 2009.

“I cherished my friendship with Bill and was thrilled when he received the Presidential Medal of Freedom,” Silver said. “I often called him basketball’s Babe Ruth for how he transcended time. Bill was the ultimate winner and consummate teammate, and his influence on the NBA will be felt forever.”

There’s no level of play and no role in the sport in which Russell was not a winner. Most notably, he won 11 NBA championships as a player with the Boston Celtics in the late-1950s and ’60s. The last two titles — in 1968 and 1969 — came as both a player and the head coach.

While at the University of San Francisco, he won back-to-back NCAA championships in 1955 and 1956. He won the award for the tournament’s most outstanding player in 1955 and was the UPI collegiate player of the year in 1956. He averaged 20.6 points and 21 rebounds per game as a senior.

And after wrapping up the NCAA title with the Dons in 1956, he went to the Melbourne Summer Olympics and won the gold medal with Team USA. He was captain and led the team in scoring.

The 6-foot-10 Russell caught the eye of legendary Celtics coach Red Auerbach in the 1956 NBA draft, so much so that he parted with star center Ed Macauley for Russell, who was drafted No. 2 overall by St. Louis. Russell joined college teammate K.C. Jones as part of the Celtics’ draft class.

The partnership between Russell and Auerbach became the greatest in basketball history. The Celtics won the title in his first season as he averaged 13.9 points and 24.4 rebounds per game.

The Celtics came up short in Russell’s second season in the NBA, through little fault of Russell. He won his first of five MVP awards in 1958, but an injury in the NBA Finals gave an opening for the St. Louis Hawks — the same team that had traded Russell on draft night — to win the title.

It was one of just two times he wouldn’t win the NBA championship. In his 13 years in the league, he failed to win a title in only his second and 11th seasons.

In 1959, the NBA and the country was introduced to the greatest rivalry in the game: Russell versus Wilt Chamberlain. The two weren’t just giants in the paint, they were ultra-athletic, too. They revolutionized a game previously dominated by lumbering centers like George Mikan.

The two met in the 1960 and ’62 playoffs and then the 1964 NBA Finals after the Warriors relocated to the West Coast. He averaged 11.2 points and 25.2 rebounds per game in a five-game series victory in the Finals. Traded back to the East, the two tangled in the 1965 and ’66 playoffs — both wins for Russell’s Celtics.

Before the 1966-67 season, Auerbach decided to leave the bench and move into an executive role. He passed the role to Russell, who would be a player-coach for the next three seasons.

The Celtics retired his No. 6 in 1972 — an event he also did not attend due to a stormy history with Boston media and the city’s racist past. He did later attend a ceremony in 1999 “re-retiring” his jersey. Chamberlain, who died just five months later, was among those in attendance.

Russell’s family recalled his accomplishments off the court, saying in their statement, “But for all the winning, Bill’s understanding of the struggle is what illuminated his life.”

“From boycotting a 1961 exhibition game to unmask too-long-tolerated discrimination, to leading Mississippi’s first integrated basketball camp in the combustible wake of Medgar Evers’s assassination, to decades of activism ultimately recognized by his receipt of the Presidential Medal of Freedom in 2010,” the family said, “Bill called out injustice with an unforgiving candor that he intended would disrupt the status quo, and with a powerful example that, though never his humble intention, will forever inspire teamwork, selflessness and thoughtful change.”

Former President Barack Obama, who presented Russell with the Presidential Medal of Freedom, released a statement, saying, “Today, we lost a giant.”

“As tall as Bill Russell stood, his legacy rises far higher — both as a player and as a person,” Obama wrote. “Perhaps more than anyone else, Bill knew what it took to win and what it took to lead. On the court, he was the greatest champion in basketball history. Off of it, he was a civil rights trailblazer — marching with Dr. King and standing with Muhammad Ali. For decades, Bill endured insults and vandalism, but never let it stop him from speaking up for what’s right. I learned so much from the way he played, the way he coached, and the way he lived his life. Michelle and I send our love to Bill’s family, and everyone who admired him.”

Accolades for Russell poured in from current and former NBA players.

Current Celtics star Jaylen Brown posted on Twitter a photo of him and Russell along with the message, “thank you for paving the way and inspiring so many.”

Former Celtics great Paul Pierce posted an undated photo on Twitter of him and other NBA player sitting around a table speaking with Russell. “I’ll never forget this day we was like kids sitting around a camp fire listening to your stories,” Pierce wrote.

NBA Hall of Famer Earvin “Magic” Johnson posted a series of tweets, writing, “I’m heartbroken to hear about the passing of the greatest winner the game of basketball has ever seen, a legend, hall of famer, mentor and my friend for over 30 years, Bill Russell.”

Johnson added, “Despite all of his achievements, he was so humble, a gentle giant, a very intelligent man, and used his voice and platform to fight for Black people. Since the day we met, he mentored me and shared advice,” Johnson wrote. ‘He was one of the first athletes on the front line fighting for social justice, equity, equality, and civil rights. That’s why I admired and loved him so much. Over the course of our friendship, he always reminded me about making things better in the Black community.”