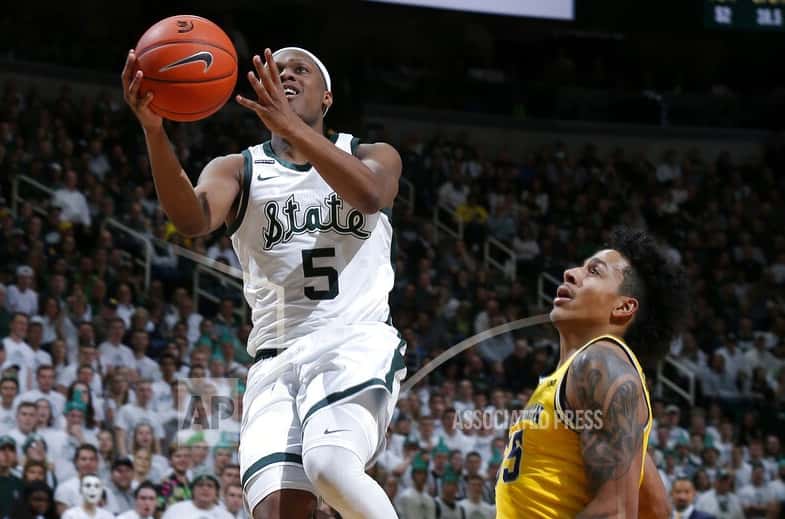 MEN’S COLLEGE BASKETBALL
Michigan State 87, Michigan 69
Cassius Winston scored a career-high 32 points and Xavier Tillman had 20 to lead No. 14 Michigan State to an 87-69 victory over No. 12 Michigan. The Spartans were ahead the entire game and beat the rival Wolverines for a fourth consecutive time. Michigan was still within striking distance with 7:00 remaining and down by just eight, but MSU sealed it finishing on a 16-6 run. The Spartans have won seven straight and are the only Big Ten team without a conference loss. The Wolverines have lost four of their last seven games after starting 7-0 under first-year coach Juwan Howard. They were led by Jon Teske, who fouled out after scoring 15 points.

WOMEN’S COLLEGE BASKETBALL
Michigan 89, Michigan State 69
The Lady Wolverines pulled away in the 4th quarter, outscoring the Spartans by 16. Naz Hillmon led Michigan with 21 points. Taryn McCutcheon scored a game high 23 in the loss for MSU.

NBA
LA Lakers 106, Detroit 99
Anthony Davis had eight of the Los Angeles Lakers’ 20 blocked shots in a 106-99 victory over the Pistons. LeBron James had 21 points, 14 rebounds and 11 assists in the Lakers’ fifth straight victory. Los Angeles needed a fourth quarter rally to pull it out as they outscored Detroit by 11 in the final frame. Alex Caruso scored 13 points and the Lakers finished one blocked shot short of their franchise record while they hung on to remain unbeaten since Christmas. Derrick Rose scored 28 points and former Lakers guard Svi Mykhailiuk had 14 for the Pistons. They have lost nine of 11 despite a strong effort against the Western Conference leaders.

Tonight…
Chicago at Dallas, 8:30
Indiana at Charlotte, 7:00
The Pistons are off

NHL
Chicago 4, Detroit 2
Dylan Sikura scored his first NHL goal, helping the Blackhawks rally for a 4-2 victory over the Red Wings. The Wings led 2-0 after the 1st period but Chicago scored twice in the 2nd and twice in the 3rd to pull it out. Dylan Strome, Adam Boqvist and Dominik Kubalik also scored as the Blackhawks won for the fourth time in five games. Corey Crawford made 19 saves in his first start since he was pulled in the second period of an ugly 7-1 loss to New Jersey on Dec. 23. Detroit dropped to 3-18-2 in its last 23 games. Filip Zadina and Luke Glendening scored in the loss for the Red Wings with Jimmy Howard making 23 stops in goal.

NFL NEWS
Three-time Pro Bowl offensive lineman Kyle Long announced Sunday he is retiring after seven seasons with the Chicago Bears.
The oft-injured Long tweeted he is “stepping away and getting my body right.” He thanked team matriarch Virginia McCaskey, former general manager Phil Emery, ex-Bears coach Marc Trestman, current GM Ryan Pace and the fans. And he wrote in response to a fan: “I was drafted a Bear and I decided to retire a Bear.”
The son of a Hall of Fame defensive end, Long made the Pro Bowl at right guard and tackle his first three seasons after Chicago drafted him with the No. 20 overall pick in 2013. But he played in just 30 games the past four years — four this season.
It was clear Long’s time in Chicago was ending after the Bears placed him on injured reserve for the fourth time in four seasons following a Week 5 loss to Oakland in London, even though he played the whole game. The Bears had an option on him for next season, but Long made the decision for them.

The Bears have hired Juan Castillo as offensive line coach, reuniting the 24-year NFL assistant with head coach Matt Nagy. Castillo last worked as Buffalo’s offensive line coach and run game coordinator from 2017-18. He replaces Harry Hiestand, who was let go last week along with offensive coordinator Mark Helfrich and two other assistants. Castillo and Nagy were assistants together for five seasons with the Philadelphia Eagles.

The Jason Garrett era is over in Dallas. The Cowboys have announced that Garrett is out as head coach after missing the playoffs with an underachieving team. The Cowboys finished 8-8 in the final year of Garrett’s contract, missing the playoffs by one game. It’s the fourth time Dallas finished 8-8 and missed the postseason under the 53-year-old coach, who was 85-67 at the helm. Garrett had the second-longest tenure with the franchise at 9½ seasons behind Tom Landry’s 29 years. Garrett took over when Wade Phillips was fired halfway through the 2010 season.

COLLEGE FOOTBALL NEWS
Michigan wide receiver Nico Collins is staying in school for his senior season. Collins announced his plans Sunday on social media. His return should provide a boost for an offense that has to replace quarterback Shea Patterson, four starting offensive linemen and two key receivers. Collins has 78 receptions for 1,388 yards and 13 touchdowns over his three-year career. He had 37 catches for 729 yards and seven scores last season for the 17th-ranked Wolverines.