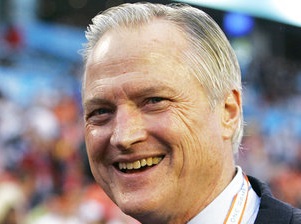 Michael McCaskey, who led the Chicago Bears for nearly three decades following the death of his grandfather George Halas, died Saturday after a lengthy battle with cancer, the team said. He was 76. The oldest of Ed and team matriarch Virginia McCaskey’s 11 children, Michael assumed operational control of the franchise in 1983 as president and CEO following the death of Halas, a founding father of the NFL and the franchise. He became chairman in 1999 and remained in that role until George McCaskey took over in 2011.

Over the weekend, the Detroit Lions reached an agreement with one of their draft picks. They came to terms with fourth-round selection Logan Stenberg, the offensive guard out of Kentucky. Stenberg is expected to compete with fellow rookie Jonah Jackson, veterans Kenny Wiggins and Oday Aboushi, and former first-round pick Joshua Garnett for the opening in Detroit’s starting lineup. Terms of the deal were not announced, but rookie salaries are on a set scale under the current collective bargaining agreement. With a signing bonus projected to be between $700,000-800,000, Stenberg will have an approximate cap hit of $800,000 in 2020.

Pistons guard Bruce Brown says he had thumb surgery last month and is ready to play if the NBA season resumes. Brown said during a video conference Friday that a ligament was placed back onto his thumb bone. He said he had been dealing with pain in the thumb this season, but it didn’t limit him much. Brown has scored 8.9 points per game this season, more than double his average as a rookie in 2018-19.

Kevin Harvick took the lead from Alex Bowman on a late restart and pulled away over the final 30 laps at Darlington Raceway to win NASCAR’s first Cup race in 71 days. It was the first Cup race since the schedule was halted due to the coronavirus pandemic. The event was run without fans and with an emphasis on masks and social distancing. Roughly 900 people were approved to be inside the gates, all considered essential.

The California State University system’s plan for a mostly virtual fall semester doesn’t necessarily close the door on football at its three schools that play in the Mountain West Conference. San Diego State is looking at having football players return to campus no earlier than July 7. It is making plans to play the season as scheduled despite the coronavirus pandemic. SDSU is proceeding because it envisions a fall schedule that includes a hybrid model of classes in which some students will be on campus for in-person instruction such as labs while other classes will be online.

The financial impact of the pandemic on college football carries a particular concern for the so-called Group of Five conferences. Many of those schools schedule games against top-level Power Five schools for payments that can exceed $1 million. If the season is shortened, Power Five schools may drop those games to play only teams in their own conference. That would cost Group of Five schools millions. This season, 39 major college football schools have scheduled a total of 49 such games worth an estimated $65 million.

NFL cornerbacks DeAndre Baker and Quinton Dunbar were released from Broward County Jail on Sunday, a day after surrendering on felony charges stemming from a cookout at a Miramar home.
Baker posted a $200,000 bond after a Zoom hearing with Broward Circuit Judge Michael Davis. The New York Giants defender is charged with four counts of armed robbery with a firearm and four counts of aggravated assault with a firearm.
Dunbar is charged with four felony counts of armed robbery. The Seattle Seahawks player posted a $100,000 bond.
The warrant said Baker and Dunbar were attending the cookout Wednesday night when a fight broke out and Baker pulled out a handgun. Witnesses told investigators that Baker, Dunbar and two other men began robbing people of thousands of dollars, watches and other valuables.
The players’ lawyers say they have witnesses who will clear them.