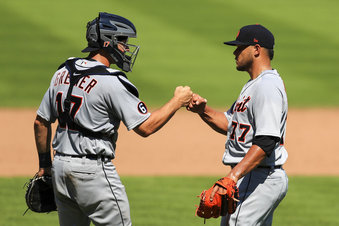 C.J. Cron hit a tiebreaking two-run homer in the ninth inning, and the Tigers got to Cincinnati’s bullpen for the second straight day in a 3-2 victory over the Reds. Miguel Cabrera reached on a leadoff walk before Cron connected against Michael Lorenzen, sending an opposite-field drive deep to right. The Reds got one back when Freddy Galvis and Aristides Aquino opened the bottom half with consecutive doubles. Aquino advanced to third on Curt Casali’s fly ball to center, but Joe Jiménez got Joey Votto to bounce into a game-ending double play for his second save in two days.

Tyler Chatwood pitched three-hit ball over six innings, Willson Contreras homered and the Cubs beat Milwaukee 9-1 to take two of three in their opening series. Chatwood gave Chicago just the sort of outing they were looking for after working mostly out of the bullpen last season. He struck out eight and walked two in an impressive start for a pitcher who struggled with his control his first two years in Chicago. Contreras smacked an RBI double in the Cubs’ four-run fourth and a long solo homer in the seventh.

Cincinnati Reds second baseman Mike Moustakas (moos-TAH’-kahs) went on the injured list Sunday after he woke up feeling sick. Manager David Bell said Moustakas didn’t feel well when he woke up Sunday morning and was told to stay home as a precaution. Center fielder Nick Senzel was a late scratch from Cincinnati’s lineup for the final game of a series against the Tigers. The moves came a day after Reds infielder Matt Davidson went on the injured list because he tested positive for COVID-19.

Boston Red Sox pitcher Eduardo Rodriguez says he is awaiting results of additional testing after doctors recently discovered an issue with his heart they believe is a result of his recent bout with COVID-19. The 27-year-old left-hander tested positive for the coronavirus before the start of summer camp, but was cleared and returned to workouts on July 18. He hasn’t had another positive coronavirus test, but said an MRI revealed a condition called myocarditis, that the team’s medical staff felt was serious enough to shut him down for at least a week.

Michael Thompson birdied two of the last three holes for a 4-under 67 and a two-stroke victory in the 3M Open. Thompson finished 19 under in his second PGA victory, seven years after his first. Adam Long took second after a 64. Richy Werenski shared the lead with Thompson after both Friday and Saturday before shooting a 70 to fall into a tie for third at minus-16. Tony Finau finished in the third-place group after a 68.

From the WNBA, Kahleah Copper scored 18 points, Allie Quigley hit a 3-pointer with 14.7 seconds to play, and the Chicago Sky scored the final 11 points to beat the Las Vegas Aces 88-86 in the season opener for both teams. Angel McCoughtry, who signed with the Aces as a free agent in February after missing all of last season with the Atlanta Dream due to a knee injury, scored 25 points and grabbed eight rebounds. A’ja Wilson had 22 points and 11 rebounds.

The NCAA Board of Governors has put off any decision about whether to hold championship events in fall sports. The decision comes after requests to wait from both the College Commissioners Association and the Division I football oversight committee. NCAA President Mark Emmert says the right move for now is to monitor health conditions around the country and focus on recent COVID-19 guidelines issued to its member schools.

Oklahoma has moved its football opener against Missouri State up a week to Saturday, Aug. 29. The Sooners said the NCAA approved a waiver request from both schools to change the date to allow more schedule flexibility amid the coronavirus pandemic. Oklahoma is set to face Tennessee in another home game Sept. 12, then travel to Army for a Sept. 26 contest.

Tight end Adam Shaheen has been traded to the Miami Dolphins by the Chicago Bears for a conditional late-round draft pick. Shaheen was slowed by injuries in his three seasons with the Bears, starting games and catching four touchdown passes, and his roster spot with the team in 2020 was in jeopardy. In Miami, he’ll compete with Mike Gesicki and Durham Smythe. Chicago took Shaheen in the second round of the 2017 draft.