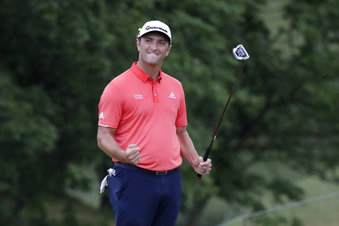 Jon Rahm will move to the top of world golf rankings after a convincing victory at the Memorial. Rahm closed with a 3-over 75 for a 9-under total, three strokes ahead of second-round co-leader Ryan Palmer at Muirfield Village. The 25-year-old Spaniard was leading by seven shots on Sunday before a double-bogey on the par-5 11th cut into his advantage. Rahm later received a two-stroke penalty after being initially credited with a five-stroke win. To become the No. 1 golfer, Rahm had to win the tournament and hope Rory McIlroy finished no better than third. McIlroy tied for 32nd. Rahm joins Seve Ballesteros as the only Spaniards to reach No. 1.

Jack Nicklaus says he’s recovered from a health scare. The golf legend revealed during Sunday’s CBS telecast of the Memorial that he and his wife tested positive for the coronavirus at the onset of the pandemic. He said his wife had no COVID-19 symptoms, while Nicklaus had a sore throat and a cough. Nicklaus said they were home in North Palm Beach, Florida, from March 13 “until we were done with it” on about April 20.
Nicklaus and his wife, Barbara, turned 80 a month apart at the start of the year.

A six run 5th inning propelled the White Sox to a 6-3 exhibition win over the Cubs at Wrigley Field last night. The Cubs scored single runs in the 1st and 2nd innings to take a 2-0 lead, but the Sox pushed all six of their runs across in the 5th inning and held on the rest of the way. Ross Detwiler got the win for the Sox, Kyle Hendricks suffered the loss for the Cubs. The two square off on the south side tonight.

Richard Childress Racing had a successful day at Texas Motor Speedway. Austin Dillon stayed in front after a restart with two laps to go and beat rookie Tyler Reddick to the checkered flag. That gave Childress a 1-2 NASCAR Cup finish and quite a show for spectators spread out in the stands. Dillon raced to his third career win and first since Daytona at the start of the 2018 season. He stayed in front on three late restarts, the first after an incident with 29 laps left that shuffled the fast car of Ryan Blaney to a lap back. Joey Logano finished third, with Kyle Busch coming in fourth a day after he finished ahead of the field in two races. Series points leader Kevin Harvick was fifth.

Matthew Boyd’s status as Detroit’s starter for the season opener is now official. Manager Ron Gardenhire confirmed Sunday that Boyd would start the opener, then the 29-year-old left-hander admitted he’d been told about the assignment months ago — before the coronavirus shut down spring training. Boyd said he was told again he would pitch the opener shortly after the Tigers reconvened for their second training camp. Detroit is set to begin the abbreviated 2020 season Friday night at Cincinnati. Boyd took some big steps forward last year, finishing sixth in the American League with 238 strikeouts.

The Toronto Blue Jays want to play their home games in a major league ballpark this season. That’s according to pitcher Anthony Bass, who says the front office is working to find a major league ballpark for the team. Bass said he spoke with general manager Ross Atkins and emphasized that players prefer a big league stadium. The veteran reliever added that players are willing to share a home venue with another team and make other sacrifices. Canada denied the Blue Jays’ request to play at Rogers Centre because the regular-season schedule would require frequent travel back and forth from the United States, where COVID-19 cases are surging. The team’s minor league options are its training facility in Dunedin, Florida, or its Triple-A affiliate stadium in Buffalo.

Cristian Espinoza scored his first goal of the season early in the second half, Chris Wondolowski provided the clincher moments after coming on as a substitute, and the San Jose Earthquakes beat the Chicago Fire 2-0 on Sunday night to clinch a spot in the MLS is Back tournament round of 16. San Jose clinched the top spot out of Group B after going unbeaten in its three matches in the group stage. Espinoza providing the game-winner in the 56th minute. Wondolowski added to his all-time MLS record for goals with his 161st goal in the 83rd minute.

The Chicago Red Stars advanced to the semifinals of the National Women’s Soccer League’s Challenge Cup tournament, prevailing 4-3 on penalties after a scoreless draw with OL Reign on Saturday night. Lauren Barnes’ attempt for the Reign hit the post to seal it for Chicago, which will play Sky Blue on Wednesday night with a chance to play for the title.

The NCAA’s latest guidance for playing college sports during the COVID-19 pandemic recommends testing players once a week within 72 hours of competition. Is that enough for a team of about 100 athletes playing a contact sport to get through a season without major disruptions? An epidemiologist says the 72-hour window still leaves lot of time for players to become infectious.

NFL players are publicly pleading with the league to address several health and safety concerns on the eve of training camp. The league informed teams on Saturday that training camps will open on time even though discussions with the players’ union regarding testing for the coronavirus and other health and safety protocols are ongoing. Rookies for Houston and Kansas City are set to report Monday and rookies for other teams are due on Tuesday. Players for all teams are scheduled to report by July 28. Many prominent players expressed their thoughts in a social media blitz Sunday. Seahawks quarterback Russell Wilson, whose wife is pregnant, wrote: “We want to play football but we also want to protect our loved ones.”
And Saints quarterback Drew Brees tweeted, “If the NFL doesn’t do their part to keep players healthy there is no football in 2020.” He wrote, “We need Football! We need sports! We need hope!”