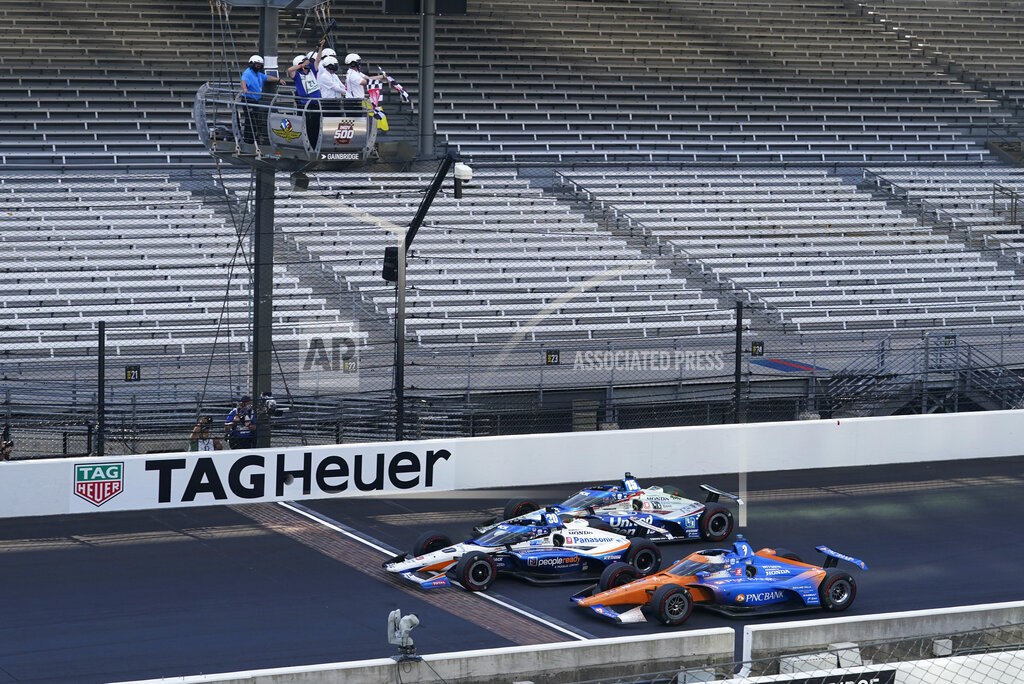 Indy 500
Takuma Sato snatched a second Indianapolis 500 victory at empty Indianapolis Motor Speedway, where the Japanese racer held off Scott Dixon and ultimately won under caution. IndyCar officials declined to throw a red-flag after a massive crash by Spencer Pigot with just a handful of laps remaining. Pigot needed medical attention on the track, the crash scene was a massive debris field and there was no way the race could resume without a stoppage.  Dixon, the five-time IndyCar champion who had dominated the race, could only follow Sato across the finish line under yellow.

Tigers 7, Indians 4
Tarik Skubal and Daniel Norris combined to pitch six innings of one-run ball, Miguel Cabrera drove in two and the Detroit Tigers hit three homers to beat the Cleveland Indians 7-4. Jorge Bonifacio hit a two-run homer and Niko Goodrum and Grayson Greiner had solo shots for the Tigers, who won for the second time in the three-game series after losing their previous 20 games to Cleveland. César Hernández belted his 12th career leadoff home run for the Indians. Greg Allen hit a three-run homer in the ninth off closer Joe Jiménez before José Cisnero recorded the final two outs for his first save.

Cubs 2, White Sox 1
Yu Darvish struck out 10 in his career-high fifth consecutive victory, and the Chicago Cubs beat the Chicago White Sox 2-1 to stop the South Siders’ seven-game win streak. Kyle Schwarber hit a two-run homer in the sixth inning as the Cubs won for just the fourth time in their last 11 games. The NL Central leaders were outscored 17-5 in the first two games of the series. José Abreu went deep for the White Sox in the second, matching a major league record with a home run in four consecutive at-bats. Abreu connected five times in the first two games against the Cubs, including three homers and four RBIs in Saturday night’s 7-4 win.

NASCAR
Kevin Harvick has regained the NASCAR Cup Series victory lead by dominating Sunday’s race at Dover International Speedway. A day after Denny Hamlin opened the doubleheader weekend with his sixth win to match Harvick and one-upped his closest rival to claim NASCAR’s regular-season title. Harvick has 56 career Cup victories to tie Kyle Busch for ninth on the career list. Martin Truex Jr. was second and Jimmie Johnson third. Johnson is on the bubble, four points outside of the cutoff with his fate to be decided under the lights at Daytona.

NFL
The NFL had 77 positive COVID-19 tests from 11 teams re-examined by a New Jersey lab after false positives, and all those tests came back negative. The league asked the New Jersey lab BioReference to investigate the results, and those 77 tests are being re-tested once more to make sure they were false positives. Among teams reporting false positives, the Minnesota Vikings said they had 12, the New York Jets 10 and the Chicago Bears nine.

NHL
Todd Reirden is out after just two seasons as head coach of the Washington Capitals.  The Capitals won two division titles in each season under Reirden but failed to capture a playoff series. He replaced Barry Trotz, who led the team to the 2018 Stanley Cup before heading to the Islanders in a contract dispute. The Islanders completed a five-game series win vs. the Capitals on Thursday.

Golf – PGA
Dustin Johnson played the final two holes in near darkness after a late storm delay and finished with a birdie for an 8-under 63 and an 11-shot victory over Harris English at The Northern Trust.  It was the 22nd victory of his PGA Tour career and fifth in a FedEx Cup playoffs event, tied with Rory McIlroy for most. Johnson finished at 30 under and returned to No. 1 in the world.

Golf – LPGA
Sophia Popov became the first female golfer from Germany to capture a major title when she won the Women’s British Open by two strokes at Royal Troon. Popov went into the final round with a three-shot lead. She bounced back from a first-hole bogey by making five birdies in her 3-under 68. Jasmine Suwannapura was the runner-up after shooting 67. Popov is ranked No. 304 and dropped off the LPGA Tour last year. She hadn’t previously won on the LPGA Tour, the second-tier Symetra Tour or on the Ladies European Tour.