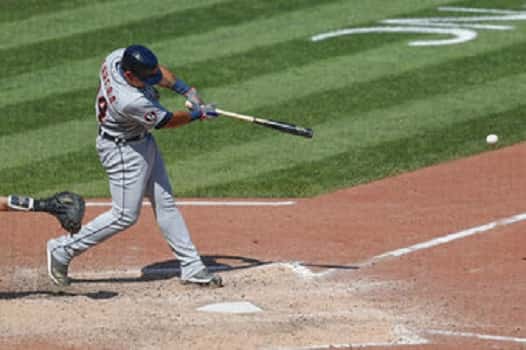 Baseball yesterday…
Spencer Turnbull pitched seven strong innings and Miguel Cabrera singled home the tiebreaking run in the eighth inning as the Tigers edged Pittsburgh 2-1 for a three-game series. Cabrera’s single to left-center field off Richard Rodriguez scored Jonathan Schoop, who was hit by a pitch with two outs and took second on a wild pitch. Detroit improved to 8-5, including 5-1 on the road, a year after having the worst record in the major leagues at 47-114. Pittsburgh lost for the 10th time in 11 games and fell to 3-14.

Delino DeShields snapped a tie with a perfectly placed squeeze bunt in the 10th inning, and Cleveland held on for a 5-4 win over the White Sox last night. DeShields’ bunt drove in José Ramírez, who started the inning on second as part of baseball’s extra-inning rule. Mike Freeman added a two-out RBI single that gave Cleveland a 5-3 lead. Veteran left-hander Oliver Perez got the final two outs following a 46-minute rain delay for his first save. It was just the fifth save of his 18-year career.

Collin Morikawa has become a first-time major champion. The 23-year-old closed with a 6-under 64 to win the PGA Championship by two strokes over Paul Casey and third-round leader Dustin Johnson. Morikawa was tied with Casey before an eagle on the par-4 16th. He closed with consecutive pars for a 13 under total. Johnson fell behind with a bogey on the par-5 14th. He also was second in last year’s PGA Championship, three months after his runner-up finish at the Masters. Jason Day, Matthew Wolff, Bryson DeChambeau, Tony Finau, and Scottie Scheffler shared third at minus-10.

The Power Five conference commissioners met to discuss the growing concern over whether the coming college football season will be played. And players took to social media to urge leaders to let them play. Big 12 Commissioner Bob Bowlsby says no decisions on the season have been made, but conceded that the outlook has not improved in recent weeks. The Big Ten university presidents and chancellors were also having a previously unscheduled meeting, a person with knowledge of the meeting told The Associated Press. All this activity comes a day after the Mid-American Conference cancelled fall sports, including football.

New England has traded an undisclosed 2022 draft pick to the Detroit Lions for cornerback Michael Jackson. Jackson was originally drafted in the fifth round in 2019 by Dallas. He began his career on the Cowboys practice squad before being signed by Detroit. Jackson joins a Patriots team that is looking to add depth in the secondary after veteran Patrick Chung opted out of the upcoming season because of concerns about the coronavirus.

The NFL Referees Association board of directors has reached an agreement with the league for health protections along with a program allowing game and replay officials to opt out of the season. Officials will be given until Thursday to opt out for a $30,000 payment with jobs guaranteed for 2021. The deal also gives officials protections if they test positive during the season or show symptoms after arriving for a game.