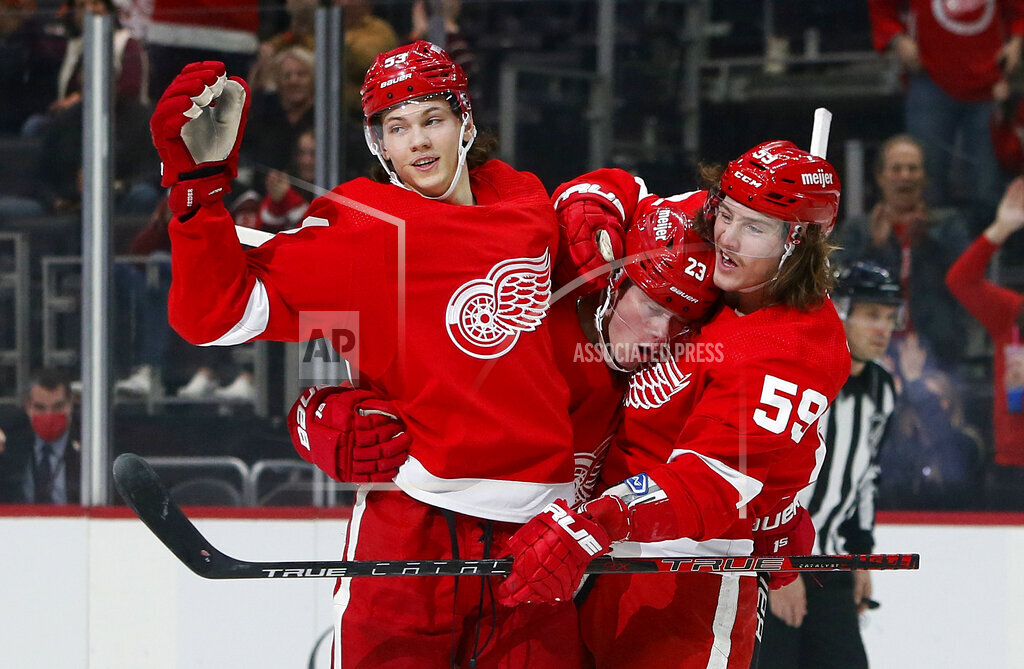 Red Wings 5, Golden Knights 2 – Suter, Bertuzzi lead Red Wings to 5-2 win over Vegas
Pius Suter and Tyler Bertuzzi each had a goal and an assist, and the Detroit Red Wings beat the Vegas Golden Knights 5-2. Robby Fabbri, Lucas Raymond and Vladislav Namestnikov also scored for the Red Wings. Sam Gagnerm, Filip Hronek and Nick Leddy each had two assists, and Thomas Greiss stopped 38 shots. Nicolas Roy had a goal and an assist, and Jonathan Marchessault also scored for the Golden Knights. Laurent Brossoit finished with 25 saves. After Roy gave Vegas the lead 3:48 into the game with his second of the season, Detroit scored the next four goals to take control.

Blackhawks 2, Predators 1 – DeBrincat scores in OT, Blackhawks win 2-1 in King’s debut
Alex DeBrincat scored 37 seconds into overtime to give the Chicago Blackhawks a 2-1 win over the Nashville Predators in Derek King’s NHL coaching debut. DeBrincat finished a 2-on-1 break and give-and-go to lift the Blackhawks to just their second win. After scoring, DeBrincat scooped the puck from the back of the net, presumably for King. King was promoted from the Blackhawks’ top minor league club, Rockford of the AHL, to Chicago’s interim coach after Jeremy Colliton was fired on Saturday following a 1-9-2 start. Chicago’s Brandon Hagel and Nashville’s Alexandre Carrier scored 1:50 apart in the second period for the only goals in regulation.

NHL – King’s fresh voice will try to right reeling Blackhawks
Derek King takes over as the interim coach of the reeling Chicago Blackhawks after Jeremy Colliton was fired on Saturday. King is charged with hitting the reset button after the team’s 1-9-2 start. The 54-year-old King has been the head coach at Rockford in the American Hockey League since 2018 following a productive 14-year NHL playing career that included 261 goals and 612 points with four teams.

NFL – Steelers look to keep Monday dominance going vs Bears
The Pittsburgh Steelers will try to push their home winning streak on Monday nights to 20 when they host Chicago. The Steelers haven’t lost in Pittsburgh on Monday night since 1991. The Bears have won each of their last three meetings with the Steelers but come to Pittsburgh struggling. Chicago has dropped three consecutive games, all by double digits. The Steelers have won three in a row following a 1-3 start to climb out of last place in the AFC North.

NBA – NBA to players, coaches, refs: Booster shots are recommended
The NBA has told its players, coaches and referees that they should receive booster shots against the coronavirus, with particular urgency for those who received the single-dose Johnson & Johnson vaccine. The league and the National Basketball Players Association says those who received Johnson & Johnson shots more than two months ago should get a booster. The booster recommendation was also made for those who received the Pfizer and Moderna vaccine at least six months ago.

NCAAFB – Cincinnati holds on to No. 2 as Tide closes in
Cincinnati has held on to the No. 2 ranking by just four points over No. 3 Alabama in The Associated Press college football poll, and Oregon passed Ohio State to move up to No. 5.  Georgia is a unanimous No. 1 for the fifth straight week. Oklahoma, which had an open date, stayed at No. 4. Oregon moved up two spots to No. 5 after beating Washington 26-16. The Ducks jumped Ohio State at No. 6, taking advantage of Michigan State’s first loss of the season.  Notre Dame moved up a spot to No. 7, and the Spartans slipped three to No. 8 after losing at Purdue. Michigan stayed at No. 9 and Oklahoma State moved up one to No. 10.

NASCAR – Larson wraps up comeback season with 1st NASCAR title
Kyle Larson closed out his comeback season in NASCAR with his first national title. He won the Cup championship Sunday by winning the race at Phoenix Raceway for his 10th victory of the year. It gave Hendrick Motorsports its 14th NASCAR championship. Larson was suspended for all but four of last year’s races for using a racial slur, but Rick Hendrick gave him a second chance this season and Larson has been unstoppable. His season will go down as one of the most dominant in NASCAR history.

MLB – Chicago Cubs pick up LHP Wade Miley’s $10 million option
The Chicago Cubs have exercised their $10 million option for left-hander Wade Miley. The move had been expected since the team claimed Miley off waivers from the Cincinnati Reds on Friday. Miley, who turns 35 on Saturday, went 12-7 with a 3.37 ERA in 28 starts for Cincinnati this season. He threw his first career no-hitter in a 3-0 win at Cleveland on May 7. If Chicago had not picked up Miley’s option, it would have owed him a $1 million buyout.

Students barred from games after chants at female goalie
A female high school hockey goalie in Pennsylvania is returning to the ice Monday for her first school game since she was the target of vulgar and abusive chants from spectators. The chants from students at Armstrong High School targeted the female goalie for the Mars Fighting Planets at an Oct. 28 game near Kittanning. The Pennsylvania Interscholastic Hockey League on Thursday barred Armstrong students from attending their school’s hockey games and placed the team on probation. Team USA Women’s Hockey Olympian Meghan Duggan has even weighed in with support for the player.