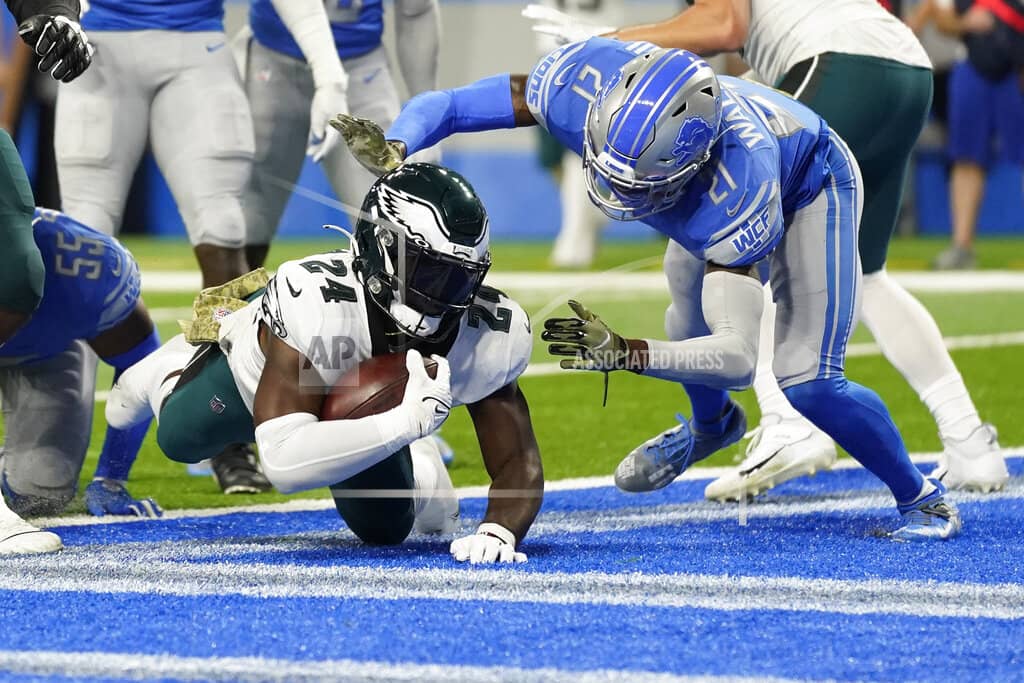 Eagles 44, Lions 6 – Eagles run for 4 TDs in 44-6 victory over winless Lions
Boston Scott and Jordan Howard each had two touchdowns on the ground, helping the Philadelphia Eagles run over the Detroit Lions in a 44-6 win Sunday. The Eagles ended a two-game losing streak against a team that was very accommodating. The Lions go into their bye week as the NFL’s only winless team. The break gives first-year coach Dan Campbell extra time to figure out how to avoid leading the league’s first 0-17 team after being a tight end on the first 0-16 team in Detroit 13 years ago.

Giants 33, Bears 22 – Garoppolo leads way as 49ers beat Bears 33-22 to stop slide
Jimmy Garoppolo threw for 322 yards and ran for two touchdowns, and the San Francisco 49ers beat the short-handed Chicago Bears 33-22 to snap a four-game losing streak. Garoppolo led three touchdown drives in the second half and another possession that ended with a field goal. He scored from the 2 in the third quarter and ran it in from the 5 in the fourth to make it 30-22. Deebo Samuel had six catches for 171 yards. Elijah Mitchell carried 18 times for 137 yards and a touchdown, helping San Francisco win for the first time since beating both Detroit and Philadelphia on the road to start the season. Chicago lost its third straight.

Titans 34, Colts 31 – Titans use late turnovers to pull off 34-31 OT win at Indy
Randy Bullock made a 44-yard field goal in overtime to cap a wild finish in the Titans’ 34-31 win at Indianapolis. The teams combined for two touchdowns in the final 86 seconds of regulation, setting up overtime before Carson Wentz threw a costly interception. Ryan Tannehill was 23 of 33 for 265 yards and three touchdowns as the 6-2 Titans overcame a quiet day from NFL rushing leader Derrick Henry, who was held to 68 yards on 28 carries.

NFL – Dan Campbell takes blame for another ugly Lions loss
For eight weeks, Detroit Lions coach Dan Campbell has been consistent about one thing. When his team loses – and that’s all it has done – he’s going to take the blame. As usual, Campbell’s players strongly disagreed. As usual, the problem was the inability to get the ball down the field. Tight end T.J. Hockenson finished with 10 catches for 89 yards, but Amon-Ra St. Brown was the only wide receiver to catch a pass. He had two receptions for 12 yards in the first half, then added a 34-yard reception in garbage time.

NFL – Bears struggle with Mack sidelined, Nagy missing game
The Chicago Bears missed coach Matt Nagy and his energy on the sidelines. But the defense seemed to be missing players like Khalil Mack and Eddie Jackson even more in a 33-22 loss to the San Francisco 49ers. The 49ers scored on seven straight possessions and made it two straight games for the Bears defense giving up more than 30 points.  Even Justin Fields’ all-around effort couldn’t prevent the Bears from losing their third straight, though he became the first Chicago quarterback since Bobby Douglass in 1973 to rush for 100 yards.

Astros 9, Braves 5 – Correa, Astros rally past Braves 9-5, cut WS deficit to 3-2
The Houston Astros have forced a Game 6 by turning an early 4-0 deficit into a 9-5 win over the Braves in Atlanta. Pinch-hitter Marwin Gonzalez gave the Astros their first lead with a two-run, bases-loaded single with two out in the fifth. Martin Maldonado drove in three runs, while Yuli Gurriel and Carlos Correa each had three of Houston’s 12 hits.

Nets 117, Pistons 91 – Harden ties Bird with 59 triple-doubles as Nets rout Detroit
James Harden had 18 points, 10 rebounds, and 12 assists to power the Brooklyn Nets to a 117-91 rout of the Detroit Pistons. Harden is Brooklyn’s all-time leader with 13 triple-doubles, and joined Larry Bird for second on the NBA’s all-time list with 59. And he had help as Kevin Durant scored 23 points before being ejected in the third quarter. Durant became the third player in the Nets’ NBA history to score at least 20 points in the team’s first seven games to start a season. LaMarcus Aldridge added 16 off the bench. De’Andre Bembry contributed 15, and  Joe Harris finished with 12.

NCAAFB – Michigan St up to 5; Wake in top 10 for 1st time
Michigan State has moved up to No. 5 in The Associated Press college football poll and Wake Forest is a top-10 team for the first time in school history. Georgia is a unanimous No. 1 for the fourth straight week in the AP Top 25 presented by Regions Bank. The rest of the top four was unchanged from last week, with Cincinnati at No. 2, Alabama at No. 3 and Oklahoma at No. 4. The Spartans jumped three spots by beating Michigan. The last time Michigan State broke into the top five was 2015. In the final AP poll before the first College Football Playoff rankings of the season, Ohio State slipped to No. 6 and Oregon was seventh. No. 8 Notre Dame, Michigan and Wake Forest rounded out the top 10.

NCAAFB – MSU stays perfect on the season, eyes Big Ten title
No. 5 Michigan State has a lot of momentum following its thrilling comeback win over its in-state rival. That’s giving one of college football’s surprising teams a shot to win a Big Ten Conference title and perhaps contend for a national championship. The Spartans rallied Saturday from a 16-point third-quarter deficit to upset Michigan behind five rushing touchdowns by Kenneth Walker. With the victory, Michigan State stayed atop the Big Ten East standings along with No. 6 Ohio State. The Spartan’s Big Ten and playoff hopes will be determined by road games at Purdue and Ohio State and home matchups with Maryland and Penn State.

NCAAFB – Number of bowl-eligible teams up to 36
There are 82 bowl slots available in the FBS — for what should be a more normal postseason after several bowls last season were canceled. So far, 36 teams have secured bowl eligibility by getting to the six-win mark. That includes Texas-El Paso, which is bowl eligible for the first time since 2014.

NASCAR – Bowman wins after bump with Hamlin
The desperation of NASCAR’s playoffs erupted when non-contender Alex Bowman spun Denny Hamlin to set up an overtime victory in a wild finish for the final spot in the championship finale. Hamlin led 103 laps at Martinsville Speedway and was out front with six to go when Bowman wiggled and bumped Hamlin out of his way. Bowman later held off Kyle Busch and Brad Keselowski to win. The victory by Bowman prevented one of the other playoff drivers from winning the race and locking up a slot in the winner-take-all championship at sold-out Phoenix Raceway next Sunday. A victory by Busch or Keselowski would have pushed either into the finale. Kyle Larson, reigning champion Chase Elliott, Hamlin and Martin Truex Jr. will race for the title.