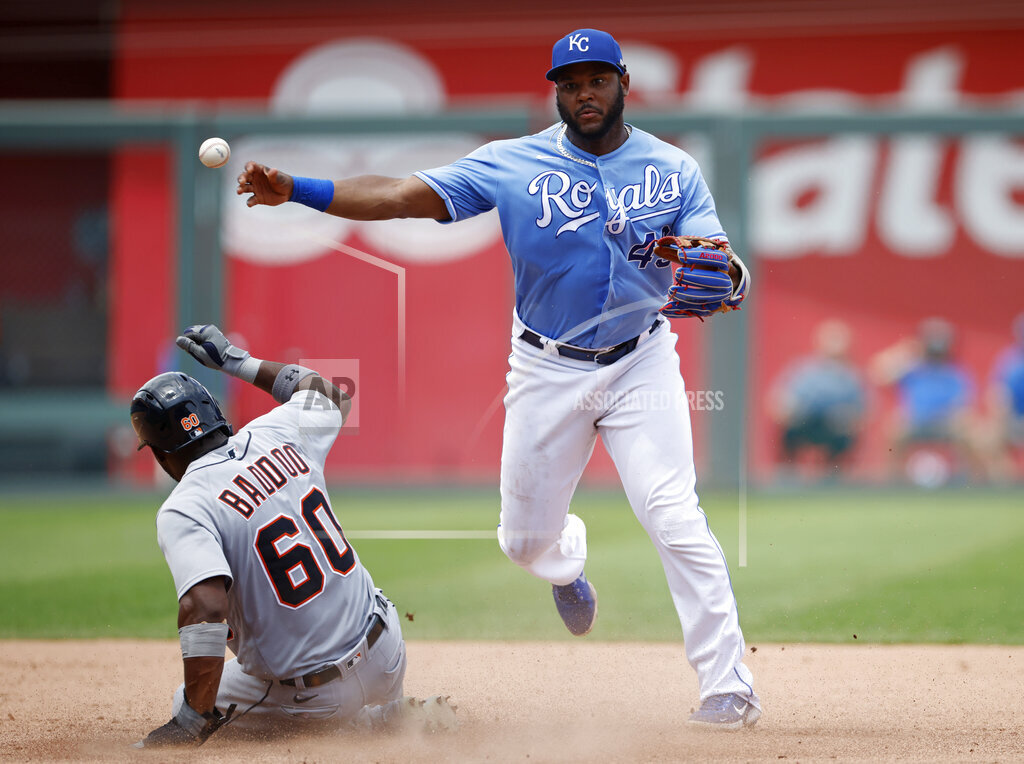 Royals 6, Tigers 1 – Lynch, Soler and Perez lead Royals over Tigers 6-1
Daniel Lynch pitched eight scoreless, Jorge Soler homered twice and Salvador Perez once to lead the Kansas City Royals to a 6-1 win over the Detroit Tigers. The Royals took a 4-0 first-inning lead as Perez hit a three-run homer and Soler followed with solo shot. He also homered in the third. Lynch (1-2) allowed five hits in earning his first major league win. Tarik Skubal (6-9) gave up five runs for the Tigers. Eric Haase had RBI single in the ninth for Detroit.

White Sox 3, Brewers 1 – White Sox top Brewers 3-1 behind Lynn, avoid sweep
to lift Chicago to a 3-1 victory over the Milwaukee Brewers as the White Sox avoided a sweep in a series between division leaders. Lynn allowed six hits, struck out six and walked none, outdueling Brandon Woodruff in a matchup of All-Star right-handers. Lynn, who lowered his ERA to 1.91, also keyed a decisive three-run second inning with his bat. Woodruff allowed three runs on five hits in seven innings, striking out nine and walking two. His ERA climbed from 2.04 to 2.14.

Cubs 5, Diamondbacks 1 – Bryant, Rizzo, Bote homer as Cubs beat Diamondbacks 5-1
Kris Bryant, Anthony Rizzo and David Bote homered, Trevor Williams pitched effectively into the seventh inning, and the Chicago Cubs beat the Arizona Diamondbacks 5-1. Bryant and Bote each hit two-run shots as Chicago took two of three in the series. Williams struck out six and allowed five hits with no walks over 6 1/3 innings in his first scoreless outing of the season. It was the right-hander’s second start and third appearance since missing five weeks following an appendectomy. Andrew Young had a pinch-hit RBI single and Pavin Smith had two hits for the Diamondbacks, who had won five of six.

NHL – Red Wings re-sign Marc Staal; Canucks to buy out Virtanen
Defenseman Marc Staal is staying put in Detroit.  The Red Wings announced reaching an agreement with Staal, and a person with direct knowledge of the contract told The Associated Press it’s a one-year deal worth $2 million. The person spoke on the condition of anonymity because the Red Wings did not release the contract’s value.

NFL – Stafford feels invigorated as he reports to 1st Rams’ camp
Matthew Stafford has had four months to acclimate himself to the Los Angeles Rams, but the fresh start he has after 12 seasons with the Detroit Lions definitely hit home on Sunday. Instead of reporting to the Lions hotel in Dearborn, Michigan, Stafford glanced to his left and saw the Pacific Ocean in the distance as Rams quarterbacks and rookies reported. Stafford, the top overall pick in the 2009 draft, spent 12 seasons in Detroit but requested a trade during the offseason after another coaching change. The Rams traded Jared Goff, two first-round draft picks and a third-round selection to Detroit for Stafford when the new league year began on March 18.

NFL – Watson plans to report to Houston Texans camp
Deshaun Watson plans to report to training camp with the Houston Texans, according to a person familiar with his thinking.  The person told The Associated Press that the quarterback still wants to be traded and is reporting solely to avoid being fined. Watson would have faced fines of $50,000 a day if he didn’t report. Watson led the NFL in yards passing last season and signed a four-year, $156 million contract extension with the Texans last offseason. But he became unhappy with the direction of the team and requested a trade in January. His future was further clouded in March after 22 women filed lawsuits alleging that he sexually assaulted or harassed them.

NCAA – Texas, Oklahoma ready to take next step toward SEC
Texas and Oklahoma could move closer to membership in the Southeastern Conference within 24 hours. According to multiple reports, the first and very significant formal step of the process could come as soon as Monday. That’s when the two schools are expected to inform the Big 12 they will not renew the contractual agreement that binds conference members until 2025. The schools would likely negotiate an early exit that could cost the schools more than $100 million. But with the rich SEC on the horizon, the schools could leave the Big 12 early and change conferences in time for the 2022 college football season.

Golf – PGA – Champ’s the champ
Cameron Champ fended off dehydration and crisply putted his way to a 5-under 66, winning the 3M Open by two strokes for his third career victory.  The 26-year-old Champ had five birdies in a bogey-free round to finish at 15-under 269 at TPC Twin Cities. Louis Oosthuizen, Jhonattan Vegas and Charl Schwartzel tied for second.

Golf – Champions – Dodd wins Senior British Open with last-hole birdie
Stephen Dodd birdied the final hole to win the Senior British Open by one stroke. The 55-year-old Welshman held off challenges from Miguel Angel Jimenez  and Darren Clarke to secure his first major title on Sunday. Dodd closed with a 2-under 68 at Sunningdale for a four-day total of 13-under 267.

Golf – LPGA – Lee wins her 1st major after beating Lee6 in playoff
Australian golfer Minjee Lee has won a sudden death playoff against overnight leader Jeongeun Lee6 to clinch the Evian Championship for her first major title.  Lee6 had to take a drop shot when her second shot on the first extra playoff hole flew into a pond, while Lee’s superb second attempt landed near the flag. Lee6 ended with a bogey to give the 25-year-old Lee three putts for victory and a sixth LPGA title.  Teenage American Yealimi Noh finished third at 17 under when she missed a birdie chance on the 18th. The day’s best round went to Ireland’s Leona Maguire. Her 10-under 61 tied the lowest round ever by a female or male in a major.

Soccer – CONCACAF – Hoppe’s 1st goal lifts US over Jamaica into Gold Cup semis
Matthew Hoppe scored his first international goal on a header in the 83rd minute and the United States beat Jamaica 1-0 to reach the semifinals of the CONCACAF Gold Cup. Hoppe, making his second international appearance, nodded home a cross from Cristian Roldan, and the U.S. eliminated the 45th-ranked Reggae Boyz for the third straight Gold Cup. The 20th-ranked U.S. will play Qatar, an invited guest ahead of its hosting next year’s World Cup, on Thursday in Austin, Texas. It will be the 11th consecutive Gold Cup semifinal for the Americans, who beat Jamaica in the 2017 final.

NBC estimates 17 million in US saw opening of Tokyo Olympics
NBC says an estimated 17 million people in the United States saw the opening of the Tokyo Olympics on Friday. That’s a 36% decrease from the kickoff to the Rio de Janeiro Games five years ago. That figure includes people who watched the ceremony live in the morning U.S. time and those who saw an edited version in prime time. That’s also less than half of the 40.7 million who saw the ceremony for the London Games in 2012. It’s difficult to judge how much the decline is due to a lack of interest in the Olympics or if the changes in how people watch television have hurt TV ratings in general.

Gymnastics – Rough start for US Gymnastics
The U.S. women’s gymnastics team’s bid for a third straight Olympic title got off to a rocky start. The four-woman group led by reigning champion Simone Biles finished second to the Russian team in qualifying. That’s the first time the Americans have failed to lead at the end of any major event in more than a decade. Biles topped the all-round with a total of 57.731 points but lacked her usual precision, making significant mistakes in three events.

Softball – Stewart’s walkoff HR lifts US over Japan 2-1 for 5-0 record
Kelsey Stewart homered leading off the seventh inning to cap a late rally that gave the United States a 2-1 victory over Japan to win the group stage at the Olympics and the right to bat last in the gold medal game. The U.S. trailed until Valerie Arioto’s RBI single in the sixth. Stewart hit the Americans’ first homer of the Olympics. Her drive just over the glove of leaping right fielder Yuka Ichiguchi sent U.S. players running onto the field with their second straight walkoff win.

Swimming – Dressel wins gold; Aussie beats Ledecky
Caeleb Dressel got started on his quest for six gold medals in swimming, while Katie Ledecky found herself in a very unusual position: Second place. Dressel led off an American victory in the men’s 4×100-meter freestyle relay at the Tokyo Olympics. That eased a bit of the U.S. sting from Ledecky’s first Olympic loss. Australia’s Ariarne Titmus lived up to her billing as the “Terminator” when she chased down Ledecky in the 400 freestyle, winning one of Tokyo’s most anticipated races. Ledecky settled for the silver — the first time she’s failed to win an individual race in three Olympics.

Basketball – US loses to France 83-76, ending 25-game Olympic win streak
The Tokyo Games have resumed just a few hours after the U.S. men’s basketball team ended a 25-game Olympic winning streak.  Evan Fournier’s 3-pointer with just under a minute left put France ahead to stay in an 83-76 win over the Americans. Fournier had 28 points for France, while fellow NBA veteran Rudy Gobert scored 14. Jrue Holiday had a team-high 18 points for the U.S., one day after arriving in Japan. The Americans can reach the quarterfinals if they win their next two games. If they lose one, they might not even finish in the top eight of the 12-team tournament.

Fencing – Kiefer wins gold for US
Lee Kiefer earned the third gold medal for the United States by beating defending champion Inna Deriglazova of Russia 15-13 in the women’s foil final.