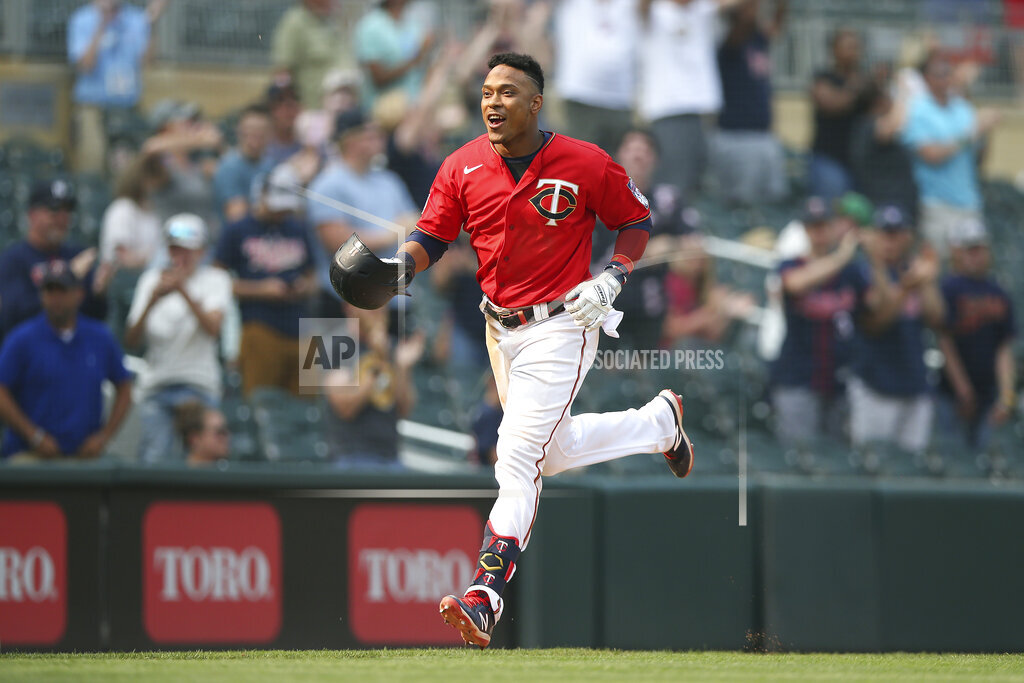 Twins 12, Tigers 9 – F/10 – Polanco, Twins overcome late slam, walk off to sweep Tigers
Jorge Polanco hit a game-ending three-run homer in the 10th inning, and the Minnesota Twins completed a four-game sweep of the Detroit Tigers with a wild 12-9 victory. Polanco hit a full-count pitch from Derek Holland to left field for his 12th homer of the season. Catcher Jake Rogers had given the Tigers a 9-8 lead with a grand slam in the top of the ninth, but Twins catcher Ben Rortvedt tied it with a solo shot in the bottom half. Tyler Duffey pitched a scoreless 10th to get the win.

White Sox 7, Orioles 4 – F/10 – Engel’s HR in 10th propels White Sox to season sweep of O’s
Adam Engel hit a three-run homer in the 10th inning and the Chicago White Sox rolled into the All-Star break with a 7-5 victory over Baltimore to complete a season sweep of the Orioles. Andrew Vaughn homered twice for the White Sox, who have won five in a row and 10 of 13 overall. Chicago leads the AL Central by eight games over Cleveland. The White Sox went 7-0 against Baltimore this season. It is the first time in franchise history Chicago has swept a season series of at least seven games against any team, according to the Elias Sports Bureau. Pinch-hitter Trey Mancini’s two-out, two-homer run in the Orioles ninth made it 4-all. The O’s have lost four in a row.

Cardinals at Cubs – PPD, Rain – Cardinals-Cubs postponed by rain, to be made up in September
Rain caused the Cubs and Cardinals to be postponed in Chicago. The game will be made up as part of a September 24 twinbill.

MLB – Cubs’ Davis 2 HRs in Futures Game, long balls begin at Coors
The Chicago Cubs’ Brennen Davis homered twice in the thin air of Coors Field and Cincinnati’s José Barrero, Colorado’s Michael Toglia and the Mets’ Francisco Alvarez also went deep to lead the National League over the American 8-3 in the Futures Game of top prospects. Davis, promoted to Double-A on June 1, sent a fourth-inning fastball from Minnesota’s Josh Winder to the trees beyond the center field wall, then hit a slider from Baltimore’s Marcos Diplan to left in the sixth, combining with Alvarez for consecutive home runs.

Bucks 120, Suns 100 – Bucks blowout: Giannis has 41, Suns’ NBA Finals lead now 2-1
Giannis Antetokounmpo had 41 points, 13 rebounds and six assists and the Milwaukee Bucks pounded Phoenix 120-100, cutting the Suns’ lead to 2-1 in the NBA Finals. The first Finals game in Milwaukee since 1974 went to the home team in a romp, with Antetokounmpo and the bigger Bucks overwhelming the smallish Suns to the tune of a 20-2 advantage in second-chance points. Game 4 is Wednesday night, with the series now guaranteed to go back to Phoenix afterward. Chris Paul had 19 points and nine assists, but the Suns got next to nothing from his star backcourt mate. Devin Booker shot 3 for 14, scoring just 10 points.

Fever 79, Dream 68 – Fever win third straight, beat Dream 79-68
Teaira McCowan had 21 points and 14 rebounds to help the Indiana Fever beat the Atlanta Dream 79-68. The Fever won their in a row after 12 straight losses and a 1-16 to start the season. Tiffany Mitchell added 14 points and Danielle Robinson scored 12. Indiana pulled away with 14 straight points for a 77-61 lead on Robinson’s basket with 3:53 left. Odyssey Sims had 20 points and Crystal Bradford added 14.

Soccer – Euro2020 – Italy wins Euro 2020, beats England in penalty shootout
Italian soccer’s redemption story is complete. England’s painful half-century wait for a major title goes on. And it just had to be via a penalty shootout. Italy won the European Championship for the second time by beating England 3-2 on penalties. The match finished 1-1 after extra time. Gianluigi Donnarumma dived to his left and saved the decisive spot kick by Bukayo Saka. It was England’s third straight failure from the penalty spot in the shootout in front of its own fans at Wembley Stadium.

Soccer – Euro2020 – Fans go from euphoria to despair as England falls short
It took just a few weeks to undo decades of pessimism for England fans, persuading millions that the team could defy decades of disappointment and win a major international soccer tournament for the first time since 1966. For much of Sunday’s final against Italy it felt like it might. But when Italy won a penalty shootout 3-2, after a match that ended 1-1 after extra time, fans sat with heads in hands. At a fan zone in Croydon, south London, friends hugged one another in consolation as a DJ played Oasis’ “Don’t Look Back in Anger.” In London’s Trafalgar Square, fans filed off dejectedly with broken glass from beer bottles crunching underfoot.

MMA – Poirier thriving as McGregor’s unlikely, involuntary nemesis
The fighter who erased most of Conor McGregor’s mystique this year is a polite family man from Louisiana who makes his own hot sauce, does extensive charity work and would prefer to compete in empty gyms. Dustin Poirier seems poorly cast as the archenemy of a loquacious international superstar. Yet in two fights over the past six months, this veteran lightweight has broken McGregor’s leg, beaten him bloody and reduced the former two-division UFC champion to a snarling, desperate antihero who refuses to accept the evidence of his sporting decline presented to him by his unlikely nemesis.

Tennis – Wimbledon – 20 Slams! Djokovic wins Wimbledon to tie Federer, Nadal
Novak Djokovic has tied Roger Federer and Rafael Nadal by claiming his 20th Grand Slam title with a four-set victory over Matteo Berrettini in the Wimbledon final. The top-ranked Djokovic won his third consecutive championship at the All England Club and sixth overall. He adds that to nine titles at the Australian Open, three at the U.S. Open and two at the French Open to equal his two rivals for the most majors won by a man in tennis history. Djokovic becomes the only man since Rod Laver in 1969 to win the first three major tournaments in a season. He will aim for a calendar-year Grand Slam at the U.S. Open.

NASCAR – Brother beats brother in Atlanta
Kurt Busch passed brother Kyle with 24 laps left and won Sunday’s NASCAR Cup Series race to complete a sibling weekend sweep at Atlanta Motor Speedway.  Kurt Busch raced to his first victory of the season, 33rd overall and the fourth of his career at Atlanta. He locked up a spot in the playoffs and possibly improved his chances of securing a new ride next season.  Kyle Busch reclaimed the lead with 47 laps remaining, but couldn’t hold off his older brother on Lap 236. Martin Truex Jr. finished third after starting at the back of the pack. Alex Bowman was fourth, followed by Ryan Blaney.

Golf – Champions – Furyk joins exclusive company with Senior win
Jim Furyk recovered from a rough start in the final round of the U.S. Senior Open to hold off Retief Goosen and Mike Weir by three strokes. Furyk played the first three holes in 3 over, but he righted himself with a birdie on the par-5 fifth hole. Furyk closed with a 1-over 71 to become the eighth player to win both the U.S. Open and Senior Open, joining the likes of Jack Nicklaus, Arnold Palmer, Lee Trevino, Billy Casper and Gary Player. Furyk finished at 7-under at Omaha Country Club.

Golf – PGA – Glover ends winless skid
Lucas Glover has earned his first PGA victory in a decade by taking the John Deere Classic by two strokes.  Glover birdied five of his last seven holes for a 7-under 64 that wrapped up his fourth career win and first since 2011 at Quail Hollow.  Glover finished his run with a 12-foot birdie on the par-5 17th, and a 6-foot putt to save par from the bunker on the 18th Ryan Moore and Kevin Na tied for second following 68s.

Golf – LPGA – Hataoka gets win after round is rained out
Nasa Hataoka of Japan was declared the winner of the Marathon LPGA Classic in Ohio when the final round Sunday was washed out by relentless, heavy rain. Hataoka had a six-shot lead over Elizabeth Szokol and Mina Harigae. She won for the fourth time on the LPGA Tour, and her first LPGA title in two years.

Olympics – Loss to Nigeria may become learning tool for USA Basketball
Gregg Popovich has been repeating a similar refrain ever since he got the job to coach the U.S. men’s national basketball team. He insists the world is catching up. He’s not wrong. The latest proof was Saturday night’s score: Nigeria 90, United States 87. That stunning loss was the way the U.S. team that departs next week for the Tokyo Olympics began its slate of tuneup games. It was the end of a 25-game home winning streak for U.S. teams with NBA players and the first time such an American team lost to any national team from Africa.