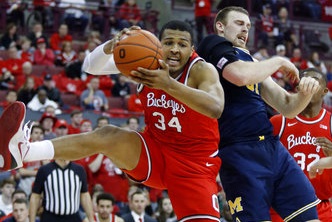 MEN’S COLLEGE BASKETBALL
(23)Ohio State 77, (19)Michigan 63
Duane Washington Jr. tied a career high with 20 points and No. 23 Ohio State surged late to beat No. 19 Michigan 77-63. CJ Walker had 15 points, and brothers Andre and Kaleb Wesson each added 14 for the Buckeyes, who have won three straight and eight of their last 10. Ohio State swept the season series against rival Michigan, winning 61-58 in Ann Arbor on Feb. 4, and reached 20 wins for the third straight season. Franz Wagner had 18 points and 10 rebounds for the Wolverines.

NBA
Sacramento 106, Detroit 100
De’Aaron Fox scored 11 of his 23 points in the fourth quarter and the Sacramento Kings rallied to beat the Pistons 106-100. Buddy Hield added 19 points, Bogdan Bogdanovic scored 15 and Harrison Barnes had 10 points and eight rebounds for Sacramento. Alex Len added 13 points, eight rebounds and five blocks. Christian Wood had 20 points and 12 rebounds for the Pistons, who lost point guard Derrick Rose to an apparent ankle injury in the first quarter. Detroit led 18-1 less than five minutes into the game but couldn’t keep up the pace after Rose was hurt.

Chicago and Indiana were off.

Tonight…
Dallas at Chicago, 8:00
Indiana at San Antonio, 8:30
The Pistons are off

NHL
Chicago and Detroit were both off

Tonight…
Colorado at Detroit, 7:30
The Blackhawks are off

NASCAR
Alex Bowman raced to his second career NASCAR Cup Series victory by holding off Kyle and Kurt Busch to win at Auto Club Speedway in Fontana, California. Bowman led 110 laps and stayed in front after the final pit stops for a comfortable win. Defending Fontana champion Kyle Busch was 8.9 seconds behind in second place. His older brother Kurt was third, and Bowman teammate Chase Elliott came in fourth.

GOLF
Sungjae Im started fast and finished stronger in the final round of the PGA’s Honda Classic, winning the event by one shot over Mackenzie Hughes and Tommy Fleetwood.
Im shot a 4-under 66 on Sunday to earn his first PGA Tour victory in 50 starts. The 21-year-old South Korean finished at 6 under to match the second-highest winning score since the Honda moved to PGA National in 2007.