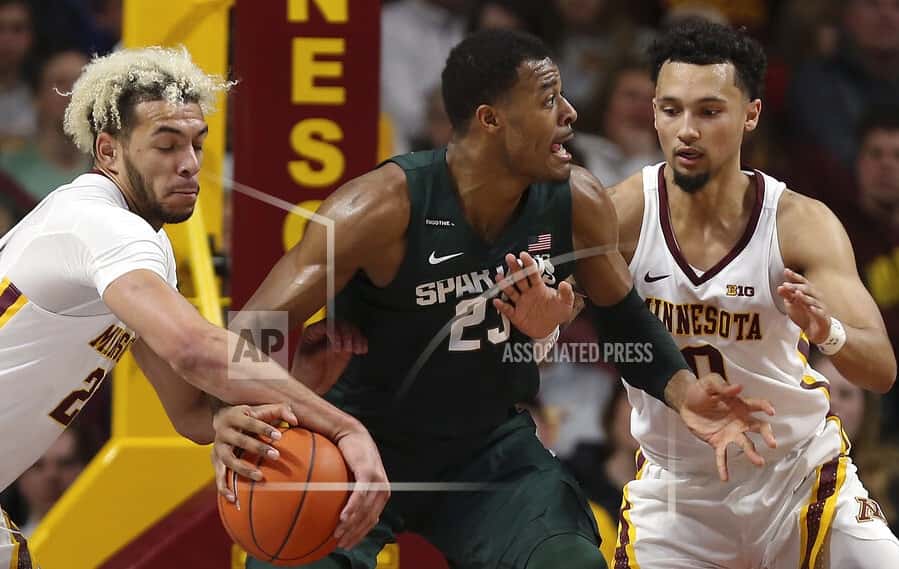 MEN’S COLLEGE BASKETBALL
Michigan State 70, Minnesota 52
Cassius Winston had 18 points and eight assists to help 11th-ranked Michigan State cruise to a second victory over Minnesota in three weeks. The Spartans beat the Gophers 70-52. Xavier Tillman added 17 points and ten rebounds for the Spartans, who bounced back from a loss at Indiana three days ago. They stayed in a first-place tie in the Big Ten with Illinois. Michigan State held the Gophers to season lows in field goal and 3-point percentage. Daniel Oturu led the Gophers with 19 points. Minnesota took its first home loss in Big Ten play this season.

NBA
Portland 139, Indiana 129
Damian Lillard had 50 points and 13 assists, becoming the first Portland player with 40-plus points in three straight games, and the Trail Blazers beat the Indiana Pacers 139-129. CJ McCollum returned after a three-game absence because of an ankle injury and added 28 points for the Blazers. Domantas Sabonis, whose father Arvydas played for Portland, had 27 points, 14 assists and 11 rebounds for the Pacers, Jeremy Lamb led Indiana in scoring with 28.

GOLF – FARMERS INSURANCE
Marc Leishman sizzled on the front nine to turn a four-shot deficit into a victory in the PGA’s Farmers Insurance Open.
Leishman reeled off five birdies before the turn and closed with a 7-under 65 for a 15-under total. He surged ahead of third-round leader Jon Rahm, who was 4 over through five holes on Sunday.
Leishman kept a cushion with three big par saves down the tough stretch at Torrey Pines and closed with a 6-foot birdie putt that turned out to be the winner.
Rahm finished one shot back and two ahead of Rory McIlroy and Brandt Snedeker.

TENNIS-AUSTRALIAN OPEN
Wimbledon champion Simona Halep has reached the quarterfinals of the Australian Open with a 6-4, 6-4 win over Elise Mertens. Halep advances to face Anett Kantaveit. The 28th-seeded Kontaveit advanced with a 6-7, 7-5, 7-5 victory against Iga Swiatek.
Also advancing to the quarters was Garbine Muguruza, who was a 6-3, 6-3 winner against ninth seed Kiki Bertens. Muguruza will play the winner of Angelique Kerber’s match against Anastasia Pavlyuchenkova.
In the men’s bracket, Stan Wawrinka has advanced to the quarterfinals with a five-set victory over fourth-seeded Daniil Medvedev. Dominic Thiem reached the quarterfinals for the first time with a three set win against No. 10 Gael Monfils.
The marquee match of the Day 8 schedule has top seed Rafael Nadal against Australian Nick Kyrgios. Also in the fourth round, it’s Alexander Zverev versus Andrey Rublev.