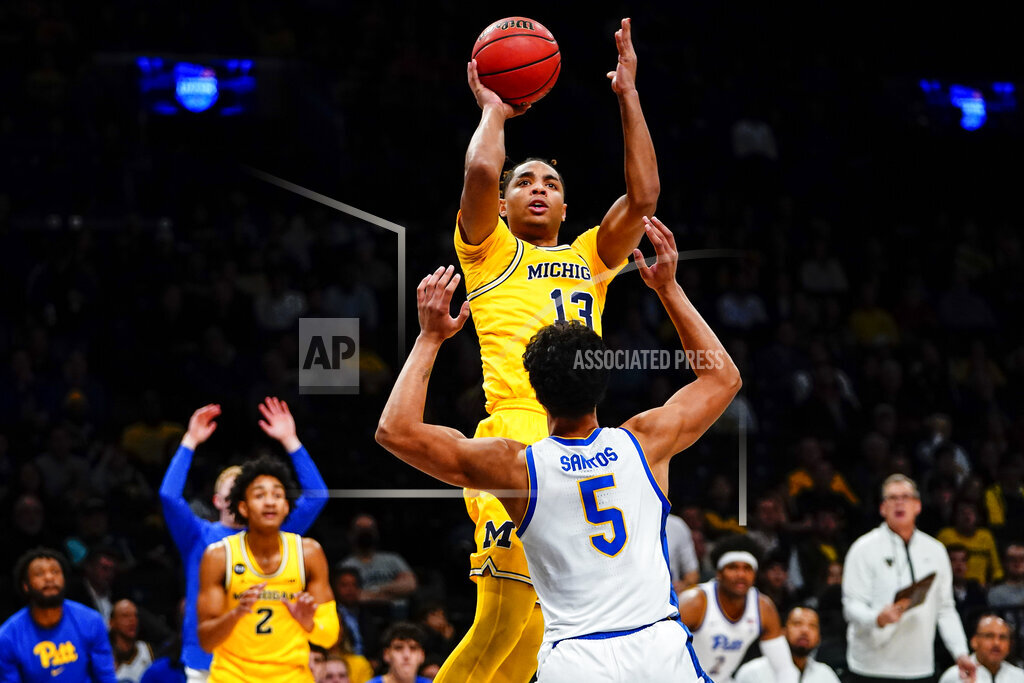 (20) Michigan 91, Pitt 60 – Howard, Dickinson lead No. 20 Michigan to 91-60 rout of Pitt
Jett Howard scored 17 points as No. 20 Michigan pulled away in the second half for a 91-60 rout of Pittsburgh on Wednesday night in the Legends Classic semifinals. After struggling to get past Eastern Michigan on Friday, the Wolverines (3-0) struggled at times during the first half before seizing control early in the second. Joey Baker and Kobe Bufkin added 14 apiece for Michigan. Hunter Dickinson totaled 11 points, seven rebounds and five assists as Michigan shot 72% in the second half and 58.3% overall. Jamarius Burton led Pittsburgh (1-2) with 14 points and Blake Hinson added 13.

(23) Michigan 99, WMU 67 – Phelia, Kiser score 25 each, No. 23 Michigan women roll
Laila Phelia and Emily Kiser scored 25 points each and No. 23 Michigan cruised to a 99-67 win over Western Michigan, the 20th straight home win for the Wolverines. Phelia set a career high on 11-of-15 shooting, including 3 of 4 from 3-point range. Kiser matched her career high on 11-of-18 shooting with 14 rebounds and a career-high eight assists. Leigha Brown added 13 points for Michigan, which had a 51-15 rebounding advantage. Lauren Ross scored 27 points and Maggie Stutelberg, added 20 for Western Michigan (0-3). Ross was 5 of 5 from 3-point range and Stutelberg 6 of 12.

(9) Notre Dame 82, Northwestern 58 – Citron, Miles lead No. 9 Irish to easy win over Northwestern
Sonia Citron finished with 24 points and 10 rebounds, Olivia Miles added 21 points before getting ejected and No. 9 Notre Dame pounded Northwestern 92-58. Lauren Ebo chipped in with 19 points and seven rebounds. Dara Mabrey broke a tie with her sister for career 3-pointers in an otherwise rough outing and the Irish rolled to an easy win. They led by 17 at halftime after things took a heated turn late in the second quarter. Notre Dame’s Natalija Marshall and the Northwestern’s Paige Mott got tied up and had some words. The Wildcats’ Caileigh Walsh, Courtney Shaw and Jasmine McWilliams were ejected for leaving the bench. Miles also got involved and picked up a technical. She was called for another one late in the third.

MLB – Verlander, Alcantara are unanimous Cy Young Award winners
Houston’s Justin Verlander in the American League and Miami’s Sandy Alcantara in the National League are both unanimous selections for the Cy Young Award. It’s the second time the winners in both leagues were unanimous since the award began in 1956. The 39-year-old Verlander won the award for the third time, having previously won in 2011 with Detroit and 2019 with Houston. He’s the 11th player to win it three times. Verlander missed almost all of the previous two seasons while recovering from Tommy John surgery. He led the AL in ERA. Alcantara led the majors in complete games with six.

Pacers 125, Hornets 113 – Haliburton, Pacers beat Hornets; Ball re-injures ankle
Tyrese Haliburton had 22 points and 11 assists, Myles Turner added 20 points and 10 rebounds and the Indiana Pacers beat Charlotte 125-113 on Wednesday night in a game in which Hornets guard LaMelo Ball re-injured his left ankle after stepping on a fan’s foot Bennedict Mathurin had 20 points off the bench, including Indiana’s first 10 points of the fourth quarter, and the Pacers won for the sixth time in eight games. Buddy Heidl added 19 points. Ball finished with 26 points for the Hornets, but left with 1:34 left when he re-injured his left ankle — the same one that kept him out of the first 13 games of the season.

WMU 12, CMU 10 – Tyler, Carter help W. Michigan beat Central Michigan 12-10
Sean Tyler ran for a career-best 177 yards and a touchdown on a career-high 26 carries, Andre Carter had two sacks — including a safety in the closing minutes — and Palmer Domschke kicked a 25-yard field goal with 1:52 to play as Western Michigan rallied to beat Central Michigan 12-10. The Broncos received the ensuing kickoff and went 57 yards in eight plays — including a 36-yard pass from Treyson Bourguet to Corey Crooms to convert a third-and-11 — to take the lead with Domschke’s field goal. Keni-H Lovely picked off a pass a few plays later to seal it for Western Michigan (4-7, 3-4 Mid-American Conference). Carter finished with three tackles for losses and has 11 this season.

NCAAFB – Freeman guides No. 18 Notre Dame back from 0-2 start
Marcus Freeman’s started his first full season as Notre Dame coach with a stumble and a fall. Losing at No. 2 Ohio State was understandable. Losing the home opener to Marshall and sliding from preseason No. 5 to out of the rankings was not. And losing starting quarterback Tyler Buchner with a season-ending shoulder injury in Week 2 only made matters worse. The Fighting Irish responded to the precarious moment by winning seven of their next eight games — all with a new quarterback, Drew Pyne. And now the Irish are back in the national conversation again.

NCAAFB – Virginia cancels game vs. Coastal Carolina after shooting
Virginia has canceled its home football game against No. 23 Coastal Carolina scheduled for Saturday following a shooting on campus that left three players dead and another wounded. The school says it has not determined if the Cavaliers will play their traditional final regular-season game at Virginia Tech on Nov. 26.

Blues 5, Blackhawks 2 – O’Reilly, Kyrou help Blues beat Blackhawks 5-2
Ryan O’Reilly and Jordan Kyrou each had a goal and an assist, and the St. Louis Blues beat the Chicago Blackhawks 5-2 for their fourth straight victory. Calle Rosen, Tyler Pitlick and Ivan Barbashev also scored as St. Louis closed out a perfect three-game trip. Jordan Binnington made 25 saves. The win streak for the Blues comes in the wake of an ugly eight-game slide, when they were outscored 38-12. Andreas Athanasiou scored twice for Chicago, and Arvid Soderblom made 30 stops. The Blackhawks lost for the fourth time in five games.

NHL – Hossa interested in more active role with Chicago Blackhawks
Marian Hossa isn’t exactly sure how he will feel when the Chicago Blackhawks retire his No. 81 jersey. The Hockey Hall of Famer is certain he is going to watch some more numbers from his championship teams in Chicago go up to the United Center rafters some day. The 43-year-old Hossa gets his moment before Sunday’s game against Pittsburgh, another one of his five teams during his 19 NHL seasons. He becomes the eighth player to have his number retired by Chicago, joining an impressive list that also includes Stan Mikita, Bobby Hull and Tony Esposito.

NFL – Fields, Bears running game deal with Herbert’s injury
Quarterback Justin Fields and the Chicago Bears’ league-leading rushing attack are trying to deal with losing running back Khalil Herbert to a hip injury as they prepare to face the league’s second-ranked rushing team in the Atlanta Falcons. Rookie Trestan Ebner will step in for Herbert, who splits time with starter David Montgomery. Fields is going for his third straight 100-yard rushing game against the Falcons after TD runs of 67 and 61 yards in the past two games.

Tennis – Novak Djokovic has visa to play Australian Open in January
The Australian government confirmed that Novak Djokovic has been granted a visa to compete in the Australian Open in January a year after he was deported over his stance against COVID-19 vaccination. The 21-time Grand Slam champion had his visa cancelled on public interest grounds on Jan. 14 and lost an appeal against deportation in the Full Federal Court. Immigration Minister Andrew Giles says he had approved Djokovic’s application to revoke the cancellation decision because the ground for canceling the visa no longer existed. The visa ban could have lasted for three years. The 35-year-old from Serbia is clear to compete at the Australian Open, which runs from Jan. 16-29.