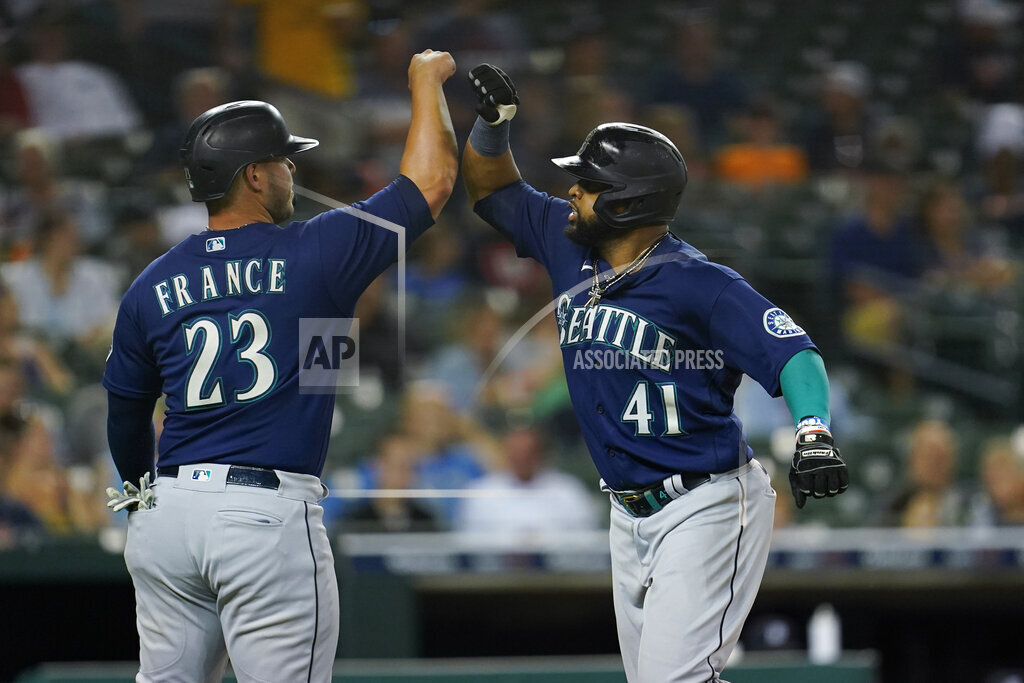 Mariners 9, Tigers 3 – Raleigh, France lead Mariners to 9-3 victory over Tigers
Cal Raleigh sparked a six-run third with a solo homer and capped it with a sacrifice fly as the Seattle Mariners rolled past the Detroit Tigers 9-3. Ty France supplied three hits, including his 16th homer, and scored three runs with two RBIs. Carlos Santana had a two-run homer for Seattle, which has won four of its last five games. George Kirby (6-3) allowed only two hits in five scoreless innings. Tigers starter Matt Manning (1-2) gave up seven runs and seven hits in 2 1/3 innings.

Royals 9, White Sox 7 – Pratto 2 HRs lead Royals; La Russa out, Chisox 5th L in row
Rookie Nick Pratto hit two home runs to highlight a career-high four-hit performance and the Kansas City Royals beat the Chicago White Sox 9-7. Chicago has lost five in a row. White Sox manager Tony La Russa missed the game because of an unspecified medical issue. The team said the 77-year-old Hall of Famer was out on the recommendation of his doctors and would undergo further testing Wednesday. Gavin Sheets homered twice and drove in five runs for the White Sox. Salvador Perez and Michael A. Taylor each homered and drove in three runs for the Royals. Pratto added a double and also had three RBIs.

MLB – Clark says push to unionize minor leaguers off to good start
Major League Baseball Players Association head Tony Clark is confident that at least 30% of minor league players will sign union authorization cards in the coming days and weeks. That would pave the way forward to start the process of creating a separate bargaining unit from the big leaguers. Clark said there has been a “tremendous response.” Signed cards from 30% of minor leaguers in the bargaining unit would allow the union to file a petition with the National Labor Relations Board asking for a union authorization election, which would be decided by majority vote.

NFL – St. Joe Alumni makes Colts’ 53-man roster
One former player that played under the Friday night lights at Dickinson Stadium in St. Joseph, will now be playing in front of the brighter lights and the dome of Lucas Oil Stadium.  Wesley French, a 2015 graduate of St. Joseph High School, made the 53-man roster of the Indianapolis Colts.  He was signed by the Colts as an undrafted free agent after going unselected in this year’s NFL Draft.  An offensive lineman, French, played significant time in all three of the Colts preseason games.  French played his college football at Western Michigan.

FIFA – FIFA safeguarding program used at under-20 Women’s World Cup
The under-20 Women’s World Cup in Costa Rica was the first youth tournament to use FIFA’s safeguarding program, which is aimed at keeping participants and fans safe from abuse, exploitation and harassment. FIFA announced that all 32 games were staffed by a safeguarding official as well as a representative from Costa Rica’s National Children’s Institute. Participants were also briefed about abuse and how to report it.

Tennis – US Open – Venus Williams, Raducanu, Osaka all out in US Open 1st round
Past U.S. Open champions Venus Williams, Naomi Osaka and Emma Raducanu all have lost in straight sets in the first round of the U.S. Open. Williams, who won two of her seven major titles in New York, was beaten by Alison Van Uytvanck in straight sets Tuesday. Their match came a day after Serena Williams won her first-round match in a much fuller and louder Arthur Ashe Stadium. Venus, who turned 42 in June, has not made any pronouncements about her future in tennis, unlike her younger sibling. Osaka is also a two-time title winner at the U.S. Open and was beaten by Danielle Collins. Raducanu became the third defending champion at Flushing Meadows to bow out in the first round, eliminated by Alizé Cornet.

NCAAFB – Recent success secures Notre Dame’s treasured independence
Notre Dame athletic director Jack Swarbrick tells The Associated Press that the Fighting Irish’s position as a major college football independent is stronger now than when he stepped into the job in 2008. Despite massive change throughout college sports, Notre Dame’s success on the field has made it even more unlikely that Notre Dame football will join a conference. The fifth-ranked Fighting Irish begin their season Saturday night at No. 2 Ohio State. Notre Dame is coming off its fifth straight double-digit victory season.

NCAA – ‘Arms race’: NIL compensation now a potent recruiting weapon
The NCAA instituted a policy last summer allowing athletes to benefit from their name, image and likeness. The idea was that it would give established players a chance to profit off their fame but wouldn’t be used as a recruiting weapon. That’s not how it’s worked out. The NCAA emphasizes that rules remain in effect to avoid pay-for-play situations or improper inducements. But there’s nothing stopping colleges from pointing out to recruits how much their athletes on campus have made through NIL compensation deals. It has now become common.

IIHF – US beats Canada 5-2 at women’s hockey world championship
Megan Keller had a goal and an assist as the United States rallied for a 5-2 victory over Olympic champion Canada in group play at the women’s hockey world championship. Lacey Eden scored the winner in the third period to help the Americans beat their longtime rival and close out group play undefeated in central Denmark. The teams are heavy favorites to meet again in Sunday’s final. The quarterfinals are Thursday. The U.S. will face Hungary, while Canada will play Sweden. Group B winner Czechia will play Finland, and Switzerland faces Japan.

Golf – McIlroy prepares to ‘stomach’ LIV Golf players at Wentworth
It sure doesn’t sound like Wentworth will be a place for PGA Tour players and LIV Golf players to visit over tea. There are 18 LIV players who have entered the BMW PGA Championship next week at European tour headquarters. Rory McIlroy says it’s going to be hard for him to stomach seeing some of the players who have left the PGA Tour for the Saudi-backed rival tour. Some of those players are longtime friends or Ryder Cup teammates. And for those who signed up for LIV to play less? The next three weeks will be taking them to Boston, London and Chicago.