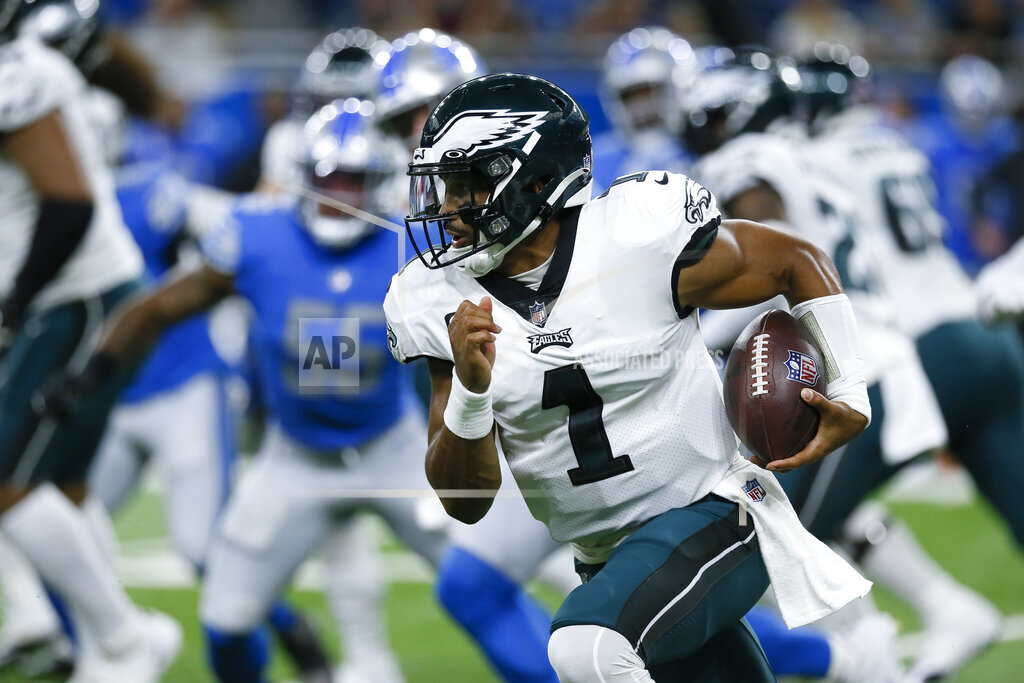 Eagles 38, Lions 35 – Jalen Hurts, Eagles too much for Lions in opener 38-35
Jalen Hurts accounted for 333 yards and a touchdown and A.J. Brown had a career-high-tying 155 yards receiving in his Philadelphia debut, helping the Eagles hold on for a 38-35 win over the Detroit Lions on Sunday. The Eagles scored 24 points in the second quarter and had a 17-point lead in the fourth that was cut to three when Jared Goff threw a 22-yard touchdown pass to DJ Chark with 3:51 left. Philadelphia sealed the win with Miles Sanders’ 24-yard run on third down and Hurts’ sneak that converted a fourth down on the final possession.

Bears 19, 49ers 10 – Fields throws 2 TDs, Bears top 49ers 19-10 in Eberflus debut
Justin Fields threw for two second-half touchdowns, Eddie Jackson set up a TD with an interception and the Chicago Bears gave Matt Eberflus a win in his head coaching debut, beating the San Francisco 49ers 19-10 on a rain-soaked afternoon. Fields shook off a rough first half, throwing a 51-yard TD to Dante Pettis in the third quarter and connecting with Equanimeous St. Brown for an 18-yarder early in the fourth to put Chicago on top 13-10. Jackson then picked off Trey Lance near midfield for his first interception since 2019 and returned the ball to the 21. That led to a 6-yard touchdown run by Khalil Herbert, making it 19-10. Heavy rain flooded the area and drenched the new Bermuda grass installed this week.

Colts 20, Texans 20 – OT – TIE – Ryan, Colts rally but stall in OT for 20-20 tie with Texans
Matt Ryan rallied Indianapolis in the fourth quarter to force overtime against the Houston Texans in his Colts debut, but neither team could score on two overtime possessions each and the game ended in a 20-20 tie. The Texans led 20-3 entering the fourth quarter in coach Lovie Smith’s debut, but Ryan led three successive scoring drives, culminating with his 15-yard touchdown pass to Michael Pittman with 1:54 remaining. The Colts got within field goal range in overtime, but Rodrigo Blankenship missed a 42-yard try with 2 minutes left. Ryan threw for 352 yards with an interception and a lost fumble.

NFL – Lions lament another season-opening rally that falls short
The Detroit Lions began their 2021 season by rallying to turn a potential blowout into a close loss to the San Francisco 49ers. Detroit did much the same on Sunday, falling behind 38-21 to the Philadelphia Eagles before scoring two late touchdowns and losing 38-35. Coach Dan Campbell says his team can be encouraged by the fact it didn’t play well but only lost by three points. Two of Detroit’s biggest mistakes were personal fouls that extended Philadelphia touchdown drives. Quarterback Jared Goff struggled to connect with his receivers until the later stages of the game.

NFL – Bears penalized for using towel on soggy field before FG try
The Chicago Bears were hung out to dry by their own towel during their season opener against the San Francisco 49ers. Trenton Gill was whistled for unsportsmanlike conduct after the rookie holder used a towel to dry off a small area of the field ahead of a potential field goal try late in the second quarter. The 15-yard penalty moved Chicago out of Cairo Santos’ range, leading to Gill’s punt. It rained for much of the morning in Chicago, soaking Soldier Field. There were splashes of water almost every time a player went to the turf.

NCAAFB – AP Top 25: UGA reclaims No. 1
Georgia has reclaimed the top spot in The Associated Press college football poll and Oklahoma State, Kentucky and Arkansas moved into the top 10 after an upset-filled weekend. The defending national champion Bulldogs started the season at No. 3 in the AP Top 25. It took them two weeks to get back to where they spent most of last year. Georgia received 53 of 63 first-place votes. No. 2 Alabama, which needed a late field goal to hold off Texas, received nine first-place votes and No. 3 Ohio State got one. No. 4 Michigan and No. 5 Clemson held their places. Oklahoma moved up a spot to No. 6. And Southern California jumped three places to No. 7. Notre Dame tumbled out all the way from No. 8 to snap a streak of 80 straight poll appearances.

NCAAFB – Nebraska fires Frost; AD says 16-31 ‘not acceptable’
Nebraska has fired football coach Scott Frost after a 1-2 start to the season. The situation was so dire that athletic director Trev Alberts made the move only three weeks before Frost’s contract buyout would have been cut in half. The Cornhuskers lost 45-42 to Georgia Southern as a three-touchdown favorite at home on Saturday night. Frost was 16-31 three games into his fifth season. Associate head coach Mickey Joseph was named interim coach for the rest of the season. Alberts said there was no attempt to negotiate a lower buyout and that Frost would receive the $15 million owed to him.

Royals 4, Tigers 0 – Singer’s 7 scoreless innings lead Royals over Tigers 4-0
Brady Singer threw seven scoreless innings as the Kansas City Royals beat the Detroit Tigers 4-0 to salvage the finale of the three-game series. Detroit was shut out for the 20th time this season, the most in the majors. Singer allowed four hits and one walk with six strikeouts. Kansas City has won six of Singer’s last seven starts. Michael Massey hit his second home run of the season and Drew Waters added a two-run double to lead the Royals’ offense. Bobby Witt Jr. had two hits and a double, his 51st extra-base hit to lead all major league rookies. Detroit starter Tyler Alexander allowed four runs on six hits over five innings.

Giants 4, Cubs 2 – Estrada, Flores homer in late innings, Giants beat Cubs 4-2
Thairo Estrada homered in the seventh, Wilmer Flores connected in the eighth and the San Francisco Giants held on to beat the Chicago Cubs 4-2. The Giants kept the Cubs offense in check while using six pitchers on a bullpen day. Estrada, Evan Longoria and Austin Dean had two hits each for the Giants. Zach McKinstry had three hits for the Cubs Flores’ 18th homer of the season matched his career-high and snapped an 0-for-19 skid. Estrada led off the seventh with a tiebreaking homer for his 13th of the season.

MLB – Chisox manager La Russa has pacemaker; return date uncertain
Chicago White Sox manager Tony La Russa says he’s on the mend after having a pacemaker inserted for his heart. He says he’s uncertain when he’ll return to manage the team. La Russa has been away from the White Sox since Aug. 30. He rejoined the club on Sunday in Oakland to celebrate the A’s retiring Dave Stewart’s No. 34 jersey. La Russa managed Stewart and was part of the tribute, but was not managing the White Sox in their game against the Athletics. La Russa shared specifics of the procedure with The Associated Press after discussing his health before Chicago’s series finale against the Athletics. He is grateful to have had what he considered a relatively “simple” heart issue. The Hall of Fame manager turns 78 next month.

MLB – George W. Bush part of MLB’s 9/11 anniversary tribute
Former President George W. Bush took part in a first ball ceremony in Texas, Aaron Judge put on special cleats at Yankee Stadium and the New York Mets wore first responder caps as Major League Baseball paused to remember the 9/11 attacks. There were moments of silence, remembrances and tributes at ballparks all across America on Sunday on the 21st anniversary of 9/11. Bush, who was president on the day of the attacks, was at Globe Life Field as the Rangers played Toronto. Bush famously delivered a perfect strike before Game 3 of the 2001 World Series at Yankee Stadium between the Yankees and Arizona Diamondbacks weeks after New York City’s twin towers fell.

Aces 67, Sun 64 – Wilson’s double-double leads Aces to 67-64 win over Sun
A’ja Wilson had 24 points and 11 rebounds and the Las Vegas Aces defeated the Connecticut Sun 67-64 on Sunday in Game 1 of the WNBA Finals The Aces staved off a late run by the Sun, who erased a seven-point deficit with 1:24 left when Alyssa Thomas hit back-to-back shots to pull Connecticut within three. But DeWanna Bonner’s desperation 3-point attempt to tie the game fell short as time expired. Chelsea Gray finished with 21 points for Las Vegas, while Jackie Young chipped in 11 as the franchise won their first WNBA Finals game in franchise history. They had been swept in 2008 when the team was in San Antonio and lost in three games in 2020. Thomas led Connecticut with 19 points and 11 rebounds.

Tennis – US Open – Carlos Alcaraz wins US Open for 1st Slam title, top ranking
Carlos Alcaraz has defeated Casper Ruud 6-4, 2-6, 7-6 (1), 6-3 in the U.S. Open final to earn his first Grand Slam title at age 19 and become the youngest man to move up to No. 1 in the rankings. Alcaraz is a Spaniard who was appearing in his eighth major tournament and second at Flushing Meadows. He only briefly showed any signs of fatigue Sunday after having to get through three consecutive five-setters to reach the title match. Ruud is a 23-year-old from Norway who is now 0-2 in Slam finals. He was the runner-up to Rafael Nadal at the French Open in June.

Golf – PGA – Harrington wins in St. Louis for 3rd PGA Tour Champions win
Padraig Harrington has won for the third time this year on the PGA Tour Champions. The Irishman had seven birdies in his closing round of 68. He needed them to offset a few mistakes he made at the Ascension Charity Classic. Harrington won by one shot over Y.E. Yang. Steve Stricker started the final round one shot behind. He was tied with Harrington when both made birdie on the fifth hole. But Stricker made nothing but pars the rest of the way and finished third. Harrington has closed the gap on Steven Alker in the Charles Schwab Cup standings.

Golf – LPGA – Ewing’s 5 straight birdies leads to LPGA win in Cincinnati
Ally Ewing hadn’t finished in the top 10 all year on the LPGA Tour. She changed that by winning the Kroger Queen City Championship. Ewing made five straight birdies on the back nine. That carried her to a 65 and a one-shot victory over Xiyu Lin of China. Ewing now has one win in each of her last three seasons on the LPGA Tour. Lin is still looking for her first victory. She made Ewing work for it. Lin made an 18-foot birdie putt on the last hole for a 65. Ewing had to make par from short of the green.