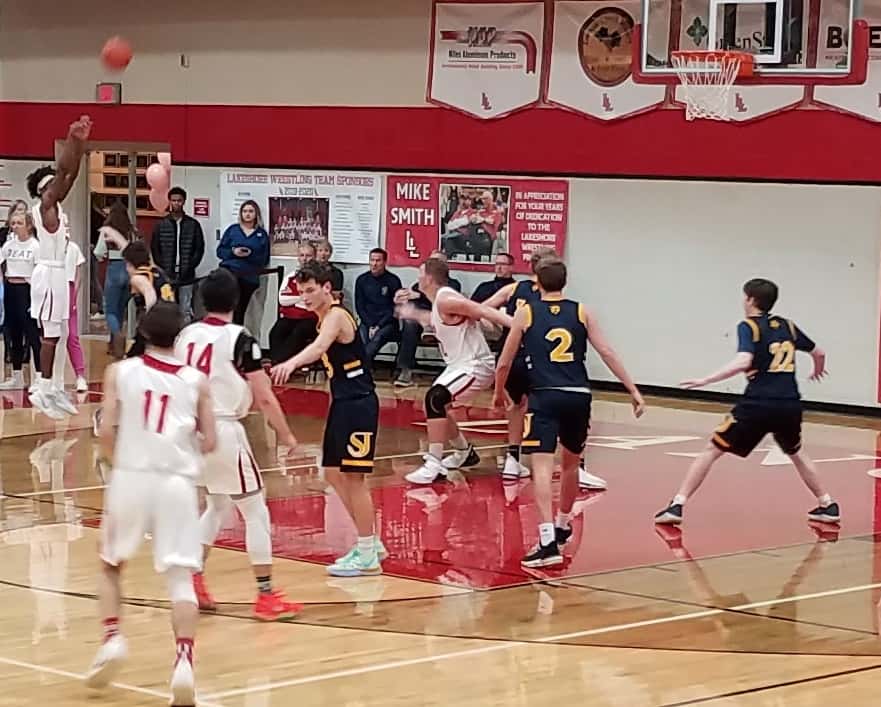 Lakeshore 59, St. Joe 42
The Lancers jumped out to a 12 point lead after the first quarter and never looked back in picking up the SMAC West Division win. The Lakeshore defense set the tone early, limiting the Bears to just three field goals in the first half. JJ Bushu led the Lancers with a game high 18 points. Conner Wright scored ten in the loss for St. Joe. Lakeshore improves to 12-2 on the season and 5-1 in the division. St. Joe falls to 3-10 on the season and 2-4 in the division.

New Buffalo 57, Michigan Lutheran 40
Already leading by seven at the half, the Bison put the BCS match-up out of reach in the third quarter as they outscored the Titans by seven in the period. Kaden Parmley led New Buffalo with a game high 24 points. Cameron Guse scored 12 points in the loss for Lutheran.

Countryside Academy 80, Covert 26
The Cougars had six players score in double figures as they cruised to the BCS win. Jamere Matlock led the way with 16 points. Countryside also got 13 points apiece from Charles Booker and Victor Norris, 12 from Brandon Buchanan, 11 from Lamarion Gordon, and ten from Jeffery Brown. Hector Hernandez scored seven points in the loss for the Bulldogs.

Portage Northern 57, Niles 42
Already leading by six at the half, Portage Northern pulled away in the third quarter to seal the SMAC West Division win. Mari Nichols scored 11 points in the loss for the Vikings, Mike Gelcrese added nine.

Watervliet 68, Gobles 66
The Panthers benefitted from strong offensive play in the paint and clutch perimeter shooting in picking up the SAC win. Karsen Tackett led three Goble players in double figures with 22 points.

Eau Claire 63, Hartford 57
The Indians dropped the Southwest 10 decision to the Beavers despite getting 24 points from Aaron Sinclair and ten from Elijah Rodarte.

Lawrence 66, Howardsville Christian 52
Brandon Lopez poured in 19 points in leading the Tigers to the BCS Conference win. Jacob Zapata and Bol Bak each added 11 points for Lawrence with Kaleb Smith and Kyle Bowen both finishing with ten.

Marcellus 68, Decatur 42
The Wildcats ran out to a 19-7 lead after the first quarter on their way to the Southwest 10 win. Gavin Etter scored 26 points in leading Marcellus. The Wildcats also got 20 points from Kaeler Stafne and ten from Brady Ferguson.

St. Joe 43, Lakeshore 21
The Bears remain in sole possession of first place in the SMAC West Division after downing the Lancers. St. Joe relied on the strength of their as both teams struggled offensively. The Bears shot 29% from the floor on the night while the Lancers shot 22%Alex Malone led St. Joe with a game high nine points. Lakeshore was paced by Hollee Hercik, who finished with six points. The win lifts the Bears to 7-0 in the division and 10-5 on the season. Lakeshore falls to 3-11 on the season and 1-6 in division play.

Countryside Academy 30, Covert 14
Celina Robinson scored ten points in leading the Cougars to the BCS win. Raka Greenwood scored seven in the loss for the Bulldogs.