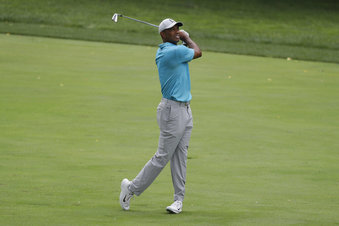 Tony Finau birdied seven of his final 10 holes for a 66 to give him a one shot lead over Ryan Palmer after yesterday’s opening round of The Memorial. Tiger Woods got his first taste of playing competitive golf without spectators. He opened and closed with birdies and finished at 1-under 71

The Cubs have announced that Kyle Hendricks will start on opening day, getting the nod over Yu Darvish. The north siders begin the season next Friday against Milwaukee. Hendricks has been one of Chicago’s most consistent pitchers since his major league debut in 2014. He’s 63-43 with a 3.14 ERA in 163 games over six seasons. Darvish will start the second game. Darvish finished strong last year, compiling a 2.76 ERA and striking out 118 in 81 2/3 innings over his final 13 starts.

Star third baseman Yoán Moncada has rejoined the White Sox after missing the start of their summer camp. Long regarded as one of baseball’s top prospects, he broke out last season when he set career highs with a .315 batting average, 25 homers and 79 RBIs. He’s currently on the injured list with an unspecified injury.

Owner Dan Snyder has hired a District of Columbia law firm to review the Washington NFL team’s culture, policies and allegations of workplace misconduct. The Washington Post reported Thursday that 15 female former employees said they were sexually harassed during their time with the team. The team issued a statement saying that “While we do not speak to specific employee situations publicly, when new allegations of conduct are brought forward that are contrary to these policies, we address them promptly.” Three members of the front office have left the organization within the past week.

The NCAA says college athletes should be tested for COVID-19 no more than 72 hours before a game, players with high-risk exposures to the coronavirus should be quarantined for 14 days and everybody on the sideline should wear a mask. The nation’s largest governing body for college sports released its latest guidance to help member schools navigate competition during the pandemic. They come as the prospects of starting a fall season look grim. Around the country, the number of COVID-19 cases are on the rise and many states have slowed reopenings or reinstated restrictions on some businesses. NCAA President Mark Emmert says if college sports are to be played this fall, “we need to get a much better handle on the pandemic.”

The Big East Conference and its member institutions have announced updated plans for their 2020 fall sports. All schedules will be conference games only, with no out of conference competition. In the coming weeks, the BIG EAST will continue to monitor COVID-19 conditions across the country and in BIG EAST communities and will provide further updates on dates and formats as appropriate.
The sports affected are: men’s and women’s soccer, men’s and women’s cross country, volleyball and field hockey. The BIG EAST’s plans for the 2020-21 winter and spring sports seasons remain unaffected at this time.

The Horizon League has announced that they will delay the start of fall sports competition until October 1. Conference officials said the decision allows each campus to further focus on enduring return to competition protocols uphold the principle of safety and can be reasonably implemented.

The Mid-Eastern Athletic Conference Council of Presidents and Chancellors has decided it will not play football in 2020. At least two MEAC schools, North Carolina A&T and Florida A&M, have had student-athletes test positive for COVID-19 since returning to campus this month. Other FCS conferences, including the Ivy League and the Patriot League, will also sit out the 2020 fall season.

The West Coast Conference will delay the start of fall competition in all sports until Sept. 24 because of the coronavirus. The league said Thursday that the affected sports are cross country, soccer and volleyball. The decision doesn’t apply to sports which aren’t sponsored by the league, including BYU and University of San Diego football.

Men’s and women’s college basketball coaches are proposing the NCAA eliminate standardized testing requirements from initial-eligibility standards. They are calling exams such as the SAT and ACT “longstanding forces of institutional racism.” The proposal came out of the new committee on racial reconciliation formed by the National Association of Basketball Coaches in response to the Black Lives Matter movement and other social justice initiatives. The committee is chaired by South Carolina coach Frank Martin and Harvard coach Tommy Amaker.

The New Orleans Pelicans say top overall draft choice Zion Williamson has left the club to attend to an urgent family medical matter. The Pelicans say Williamson intends to rejoin the team for the resumption of the season. But the club has not said whether the former Duke star would be able to return or whether he’ll miss any games because of his departure on Thursday. Williamson will have to quarantine again when he returns to Central Florida.