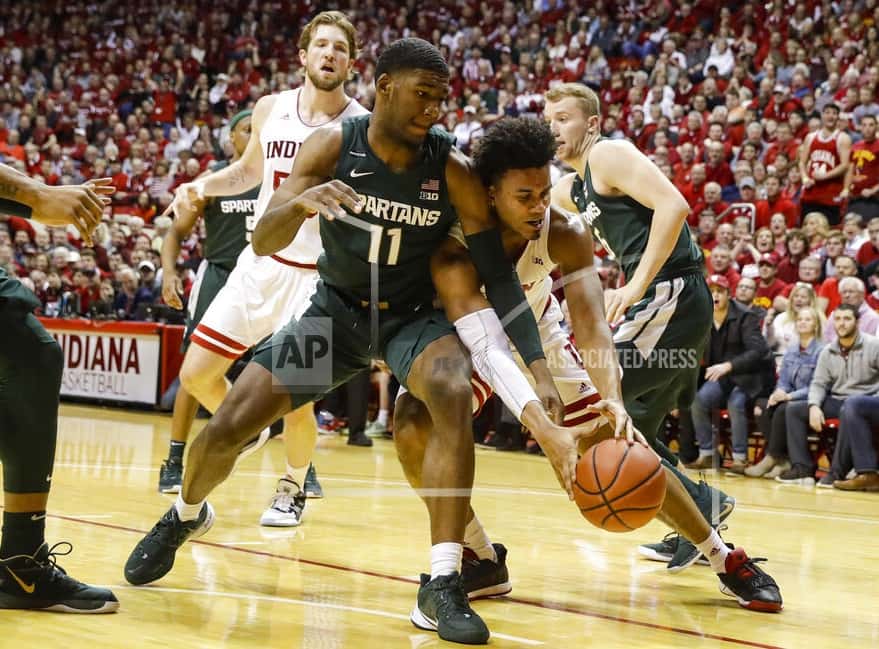 MEN’S BASKETBALL
Indiana 67, Michigan State 63
Joey Brunk scored 14 points including a key layup with 1 minute left to play and Jerome Hunter made two late free throws to close out Indiana’s 67-63 victory over No. 11 Michigan State. The Hoosiers have won two straight and four of their last five. The Spartans have dropped two of their last three. It was coach Archie Miller’s 50th win since taking the job three seasons ago. This one came after Indiana blew a seven-point halftime lead. Cassius Winston led the Spartans by scoring 13 of his 17 points in the second half. Michigan State had a chance to force overtime but Xavier Tillman’s alley-oop layup rolled off the rim.

Off the court…
The Big Ten suspended Illinois guard Alan Griffin two games Thursday for stepping on Purdue’s Sasha Stefanovic. Griffin got called for a flagrant foul 2 and was ejected with 12:21 left in the first half Tuesday at Purdue when he stomped on Stefanovic’s midsection after the guard drove for a layup and drew a crescendo of boos. No. 21 Illinois went on to win 79-62. Griffin, averaging 8.4 points, will miss games against Michigan on Saturday and Minnesota on Jan. 30. He apologized Wednesday to Stefanovic and Purdue as well as Illinois and its fans on social media.

WOMEN’S COLLEGE BASKETBALL
Northwestern 76, MSU 48
Lindsey Pulliam and Veronica Burton scored 22 points apiece to help No. 22 Northwestern beat Michigan State 76-48 for their fifth straight victory. Abbie Wolf had 14 points and nine rebounds for Northwestern. Abi Scheid, who was awarded the Big Ten player of the week on Monday, had five points, six rebounds and four assists in 33 minutes. Pulliam and Burton each had 11 points in the first half to help Northwestern take a 33-23 lead at the break. Moira Joiner scored 17 points, with five 3-pointers, for Michigan State, which shot just 35%.

NHL
The entire league is off for the All-Star break.

NFL
Minnesota has hired Gary Kubiak as their new offensive coordinator. He fills the vacancy created by Kevin Stefanski’s departure to become head coach of the Cleveland Browns.