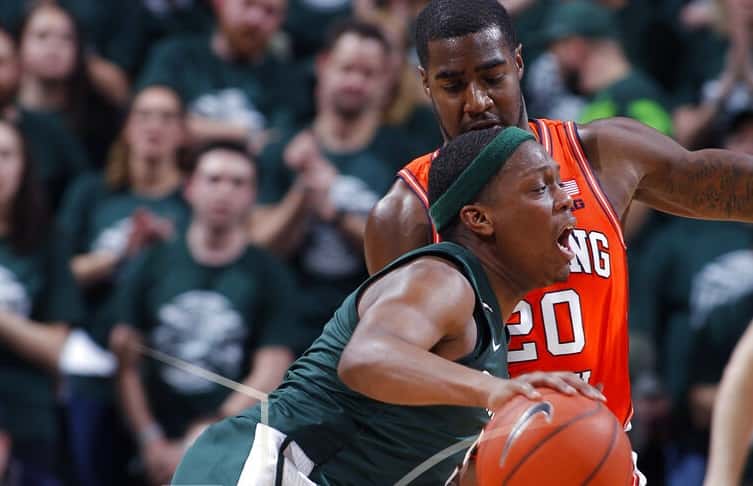 MEN’S COLLEGE BASKETBALL
#14 Michigan State 76, Illinois 56
Cassius Winston had 21 points and Xavier Tillman scored 19, leading No. 14 Michigan State to a 76-56 win over Illinois. The Spartans have won six straight and have won their first three conference games to stay alone in first place. Michigan State led the entire game but had just a six-point edge at halftime. The Spartans pulled away early in the second half with a 15-3 run. The Fighting Illini lost a lopsided game in Big Ten play for the first time this season. They had a one-point loss at Maryland and beat Michigan.

WOMENS COLLEGE BASKETBALL
Notre Dame 60, Pittsburgh 52
The second quarter proved to make the difference as the Lady Irish defeated Pittsburgh 60-52.  With the game tied 8-8 after the first quarter, Notre Dame outscored the Panthers by eight in the second.  The two teams went on to play even from there.  Mikayla Vaughn led the Irish with 17 points, Destinee Walker added 16.  The win snaps Notre Dame’s four game losing streak.

NBA
Utah 102, Chicago 98
Bojan Bogdanovic scored 19 points, and the surging Utah Jazz held off the Bulls 102-98. The Jazz went on a 24-4 run in the third quarter to grab a nine-point lead and came away with their 10th win in 12 games after Chicago tied it in the closing minutes. Donovan Mitchell and Rudy Gobert each scored 17 for Utah. Mitchell hit two free throws with 19 seconds remaining, and Gobert had 12 rebounds. Zach LaVine led Chicago with 26 points. Lauri Markkanen scored 18. Wendell Carter Jr. added 18 points and 13 rebounds. The Bulls have lost 3 of their last 4

L.A. Clippers 126, Detroit 112
Montrezl Harrell scored 23 points, Lou Williams added 22 and the Los Angeles Clippers survived without Paul George in the second half to beat the Pistons 126-112. The Clippers won consecutive games for the first time since Dec. 13. George didn’t return after halftime because of left hamstring tightness. He finished with 12 points. Kawhi Leonard scored 18 points in three quarters for Los Angeles. The Pistons have lost four in a row on the road and eight of nine overall. Bruce Brown came off the bench to lead Detroit with 15 points. Blake Griffin sat out against his former team.

Denver 124, Indiana 116
Michael Porter Jr. scored a career-high 25 points and Jamal Murray added 22 in leading the Nuggets to their third win in four games, 124-116 over the Pacers. Nikola Jokic provided 12 of his 22 points in the fourth quarter and finished with seven rebounds as Denver dealt Indiana its fourth loss in six games.

NHL
Vancouver 7, Chicago 5
Adam Gaudette scored a third-period goal and the Vancouver Canucks rallied from a two-goal deficit, extending their winning streak to six games with a 7-5 win over the Blackhawks. The game was tied 5-5 until the Canucks scored twice in the final 4:11. Bo Horvat had two goals, including an empty-netter, and an assist for Vancouver. Patrick Kane scored twice in the loss for the Blackhawks. The loss snaps Chicago’s 3 game winning streak.

Off the field…
Cole Kmet is the latest Notre Dame player to give up his final year of eligibility to enter the NFL draft, changing his mind after saying in November that he intended to return. The tight end announced his decision Thursday on Twitter, joining running back Tony Jones Jr. and safety Alohi Gilman in making themselves available for the April 23-25 draft. Quarterback Ian Book will return to Notre Dame next season. The 6-foot-5 1/2. 250-pound Kmet, also left-handed pitcher, indicated a month ago he was looking forward to rejoining the Irish baseball team on which younger brother Casey is a freshman catcher and infielder.

NFL NEWS
The Lions have two more openings on their overhauled coaching staff. Lions coach Matt Patricia announced that defensive coordinator Paul Pasqualoni is leaving the team to be closer to his family in Connecticut. Patricia says offensive line coach Jeff Davidson is taking an indefinite leave from the profession. Patricia previously fired six members of his staff in hoping coaching changes will help him in a third season that might be his last if there isn’t a turnaround. The Lions were 3-12-1 in 2019 after losing 10 games the previous year in Patricia’s debut as an NFL head coach.

BASEBALL NEWS
The White Sox and Cuban outfielder Luis Robert have agreed on a $50 million, six-year contract. The deal means the White Sox won’t be incentivized to keep the 22-year-old Cuban off their opening day roster to limit his service time and delay his eventual free agency. The 22-year-old Robert has hit .312 over three minor league seasons, including 32 home runs, 92 RBIs, 108 runs and 36 stolen bases last season. The deal is just the latest big money move by the White Sox.