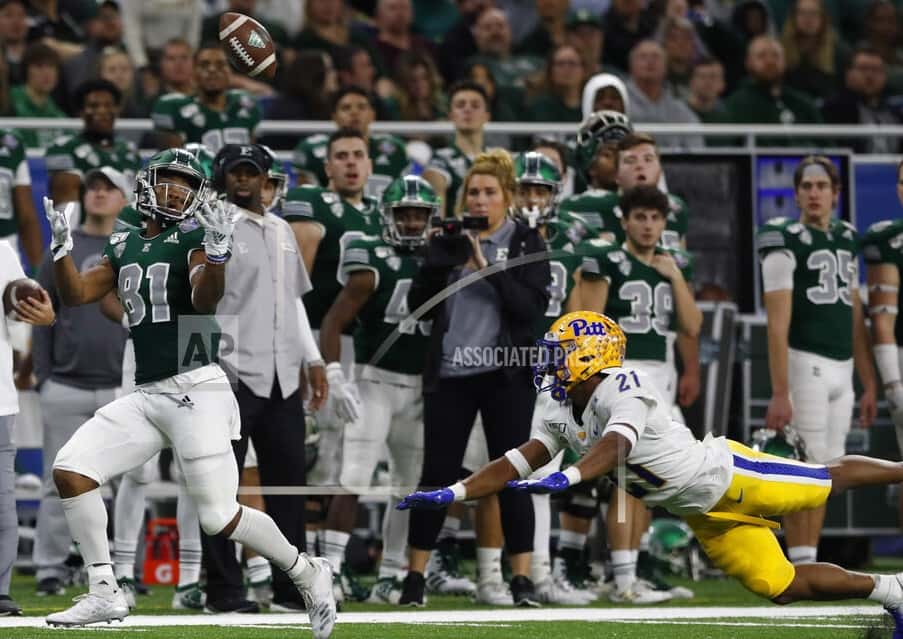 COLLEGE FOOTBALL
Quick Lane Bowl
Pittsburgh 34, Eastern Michigan 30
Kenny Pickett threw 25-yard touchdown pass to Taysir Mack with 47 seconds left and Pittsburgh held on to beat Eastern Michigan 34-30 in the Quick Lane Bowl. The Panthers forced Eastern Michigan to turn it over on downs after taking their first lead of the game. That sealed Pitt’s first bowl victory under coach Pat Narduzzi. The Eagles came up just short just as they did in three previous bowls under coach Chris Creighton. Eastern Michigan quarterback Mike Glass was ejected with 10 seconds left after throwing punches at two players, the second Eagles player to be tossed. Glass finished with 311 yards passing with two touchdowns and an interception.

Off the field…
Michigan defensive end Kwity Paye has decided to return for his senior season. Payne announced his plans with an Instagram post Thursday night, ending speculation he might enter the NFL draft. He led the Wolverines with 12 1/2 tackles for losses and was second on the team with 6 1/2 sacks during the regular season. Paye was voted second-team All-Big Ten by conference coaches. The 17th-ranked Wolverines will play No. 9 Alabama on Jan. 1 in the Citrus Bowl.

NBA
Detroit 132, Washington 102
Blake Griffin had 14 points and a season-high 11 rebounds as the Pistons routed the Washington Wizards 132-102 in a matchup of short-handed teams. The Pistons were missing Reggie Jackson (back) and Luke Kennard (knee). Griffin, Bruce Brown and Derrick Rose were playing through injuries. John Wall, Davis Bertans, Isaiah Thomas, Thomas Bryant and Rui Hachimura sat out for Washington. Detroit, which had already lost twice to the Wizards, got 14 points and 10 rebounds from Andre Drummond. Pistons coach Dwane Casey was able to use the lopsided margin to rest his key players.

Off the court…
Pistons guard Luke Kennard is expected to be out of the lineup for two weeks because of knee tendinitis. The team said Thursday that Kennard will be evaluated again before returning to play in early January. The third-year pro is averaging nearly 16 points per game. He’s tied with Blake Griffin and trailing only Andre Drummond in scoring on the team. Kennard is making a team-high 2.6 3-pointers per game. He averaged fewer than 10 points per game during his first two NBA seasons after Detroit drafted the Duke star No. 12 overall in 2017.

NHL
The entire league had Thursday off

OTHER NEWS
Gymnast Simone Biles is the 2019 AP Female Athlete of the Year. The reigning world and Olympic champion edged U.S. women’s soccer star Megan Rapinoe for the honor in a vote among AP member sports editors and AP beat writers. The 22-year-old is the first gymnast to win the award twice and the first to do it in a non-Olympic year. She was named the Athlete of the Year in 2016 after winning four gold medals at the Rio Olympics. Biles is preparing for the 2020 Games in Tokyo and says she’s eager to finish her career with a flourish.