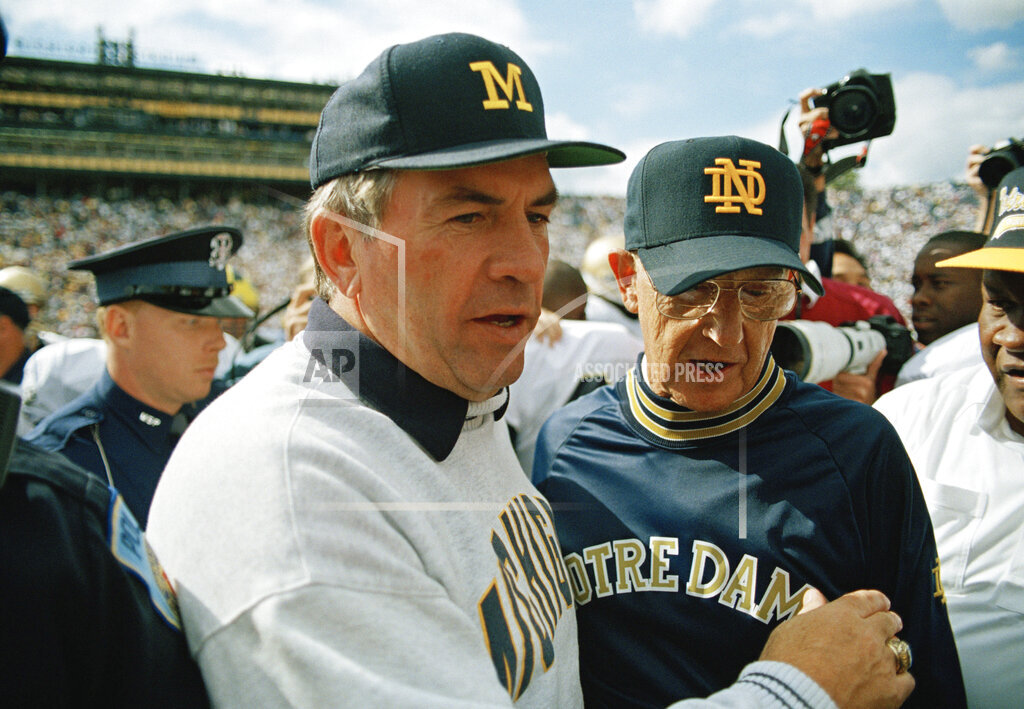 NCAAFB – Gary Moeller, former Michigan and Lions coach, dies at 81
Former Michigan football coach Gary Moeller has died. The university says he died Monday at the age of 81. No cause was provided. Moeller coached the Wolverines from 1990-95, succeeding Bo Schembechler. He went 44-13-3 with three Big Ten titles and four bowl victories. After he resigned, he moved to the NFL and was an assistant for four teams. He coached the Detroit Lions for seven games in 2000, going 4-3. Moeller’s first head coaching job was at Illinois from 1977-79. Moeller was from Lima, Ohio. He played linebacker and was a captain for Woody Hayes at Ohio State.

Royals 3, Tigers 1 – Royals 7, Tigers 3 – Bobby Witt Jr. has 4 hits, Royals sweep twinbill vs Tigers
Bobby Witt Jr. had his first career four-hit game along with three RBIs to help the Kansas City Royals beat the Detroit Tigers 7-3 for a doubleheader sweep. In the opener, Brad Keller tossed seven strong innings and rookie Vinnie Pasquantino homered and drove in two runs as the Royals beat the Tigers 3-1. Witt had a hit in each of the first three innings in the late game, giving him six hits for the doubleheader. He scored twice and stole three bases on the day. Detroit starter Alex Faedo slogged through a 37-pitch first inning, walking the bases full after Witt tied it with a double.

Guardians 8, White Sox 4 – Rookie Jones drives in 4 as Guardians topple White Sox 8-4
Rookie Nolan Jones drove in four runs in his home debut for Cleveland, leading the Guardians to an 8-4 win over the Chicago White Sox. A 24-year-old outfielder with a sweet swing, Jones hit a two-run single in the first inning off Lance Lynn. He chased the right-hander with a two-run double in the fifth. Jones is batting .500 (6 for 12) with a homer and eight RBIs in four games since coming up from Triple-A Columbus. Back from a 1-6 road trip to Detroit and Kansas City, the Guardians staked Cal Quantrill to a five-run lead in the first and moved back to .500 at 42-42.

MLB – LA stadium workers authorize strike ahead of All-Star week
Concession workers at Dodger Stadium have voted to authorize a strike days ahead of MLB’s All-Star Game festivities in Los Angeles. Workers employed by concessionaire Compass Group and its subsidiary Levy Restaurants voted 99% to authorize a strike. Unite Here Local 11 says a strike could begin at any time. The union is seeking what it calls “a fair new contract.” Levy employs nearly 1,500 food servers, bartenders, cooks and dishwashers at the stadium. All-Star Game events begin Saturday and culminate in the game on July 19.

NHL – Derek King stays with Blackhawks as assistant coach
Derek King is staying with the Chicago Blackhawks as an assistant coach on Luke Richardson’s staff. King finished last season as Chicago’s interim coach after Jeremy Colliton was fired on Nov. 6. He was in the mix for the full-time job before Richardson was hired last month. Kevin Dean also was hired as an assistant. Dean was an assistant with the Boston Bruins for the previous five seasons. Dean was an NHL defenseman for seven seasons, finishing his playing career with 96 games with the Blackhawks.

NFL – Officials: Ex-Cowboys RB Marion Barber died of heat stroke
Police in a Dallas suburb have concluded that heat stroke caused the death of former Dallas Cowboys running back Marion Barber III. In a statement Monday, Frisco police say the Collin County medical examiner ruled Barber’s death an accident. Police provided no further elaboration, and the medical examiner’s office didn’t immediately respond to messages from The Associated Press. Police making a welfare check on June 1 found the 38-year-old former running back dead at a Frisco apartment. Barber spent six seasons with Dallas and one with the Chicago Bears. He made the Pro Bowl in 2007.

NFL – Heinz out, Acrisure in as Steelers’ stadium sponsor
The Pittsburgh Steelers have run out of Heinz. And they’re not running to the store to grab more. The Steelers have ended their longtime partnership with the formerly Pittsburgh-based food company. Heinz had served as the title sponsor for the NFL franchise’s home stadium on the city’s North Shore since it opened in 2001. The venue will now be known as Acrisure Stadium after the Michigan-based financial tech company agreed to a 15-year sponsorship deal with the team.

Golf – Tiger Woods part of celebration of champions at St. Andrews
Talk about a great warmup act for the 150th British Open at St. Andrews. Monday was the “Celebration of Champions.” Tiger Woods isn’t big on ceremonial golf, but this would be considered a big exception. He played with Rory McIlroy, Lee Trevino and former Women’s British Open winner Georgia Hall. They were joined at the end by Jack Nicklaus. He wasn’t playing. Nicklaus is in the gray old town to become an honorary citizen of St. Andrews. That led to a lot of laughs and memories. McIlroy says it was a dream to be part of it all.

Golf – PGA/LIV – Report: DOJ inquiring about antitrust in PGA-LIV dispute
The Wall Street Journal is reporting that the U.S. Department of Justice is now interested in the dispute between the PGA Tour and the Saudi-funded LIV Golf series. The Journal reports that players’ agents have received inquiries from the Justice Department’s antitrust division. They involve the PGA Tour regulations on players competing in other events and the tour’s decision to suspend those who played. The Justice Department had no comment. The tour says in a statement the investigation was not unexpected. It cites a Federal Trade Commission investigation in the 1990s in believing it will prevail again.

USA Soccer – Mewis scores late, US women top Mexico 1-0 at W Championship
Kristie Mewis scored in the 89th minute to break a stalemate and the United States beat Mexico 1-0 at the CONCACAF W Championship. The U.S. won Group A in the eight-team tournament and will face Costa Rica in the semifinals. The Americans had already qualified for the 2023 Women’s World Cup as one of the top two teams in their group. Mexico’s Lizbeth Ovalle was sent off with a red card for a foul on Rose Lavelle in the 73rd minute. In other tournament action, Jamaica beat Haiti 4-0, Canada beat Costa Rica 2-0 and Panama beat Trinidad and Tobago 1-0.

Tennis – Analysis: Unvaccinated Djokovic’s pursuit of Nadal on hold
Novak Djokovic overtook Roger Federer in the Grand Slam title standings and moved within one of Rafael Nadal by claiming his 21st major trophy at Wimbledon. Now Djokovic is headed off to vacation. And what no one knows right now is how long his break will be or when he might be able to resume trying to accumulate Slam hardware. He is not vaccinated against COVID-19 and repeated Sunday after beating Nick Kyrgios for a seventh championship at the All England Club that he will not get the shots. As things stand now, that means Djokovic will not be able to enter the United States to play in the U.S. Open in August.