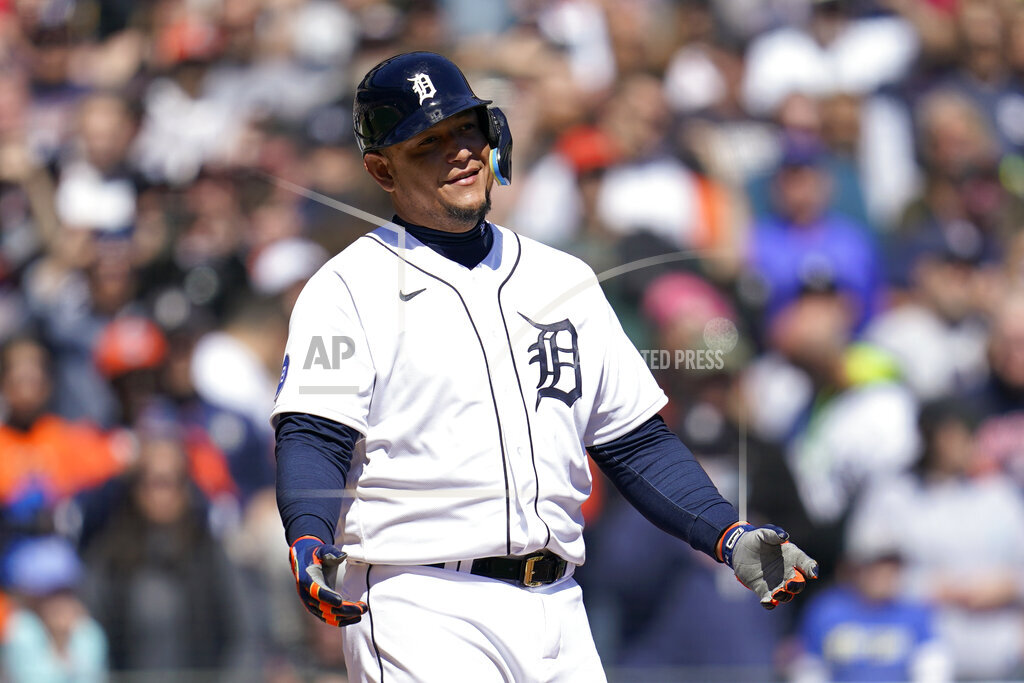 Tigers 3, Yankees 0 – Cabrera intentionally walked with 2,999 hits as Tigers beat Yankees 3-0
New York Yankees manager Aaron Boone went from Scrooge to Santa Claus in the eyes of Tigers fans on Thursday in Detroit.  Boone elected to intentionally walk Miguel Cabrera in the eighth inning, denying the Tigers designated hitter of a chance for his 3,000th career hit. The decision came with two runners on, two out and the Tigers clinging to a 1-0 lead. One batter later, Austin Meadows blooped a two-run double to put Detroit ahead by three in a 3-0 shutout of New York.
Former Yankee Michael Pineda picked up his first win as a Tiger, yielding three hits over five innings. Robbie Grossman doubled home Detroit’s first run off hard-luck loser David Mongomery, who allowed just two other hits while becoming the first Yankee to throw six innings this year.

Guardians 3, White Sox 0 – Naylor, Plesac lead Guardians to sweep of White Sox 6-3
Josh Naylor had two hits and two RBIs, continuing his comeback from a devastating leg injury and helping the Cleveland Guardians complete a series sweep of the Chicago White Sox with a 6-3 victory. Cleveland took both games of a doubleheader on Wednesday against Chicago, which has lost four straight. Naylor hit an RBI single in the fifth and a run-scoring double in the seventh. He was activated Friday after suffering multiple fractures in his right leg during an outfield collision last June.

Pirates 4, Cubs 3 – Vogelbach’s HR rallies Pirates past Cubs 4-3
Daniel Vogelbach hit a two-run homer, Yoshi Tsutsugo had a two-run double and the Pittsburgh Pirates rallied past the Chicago Cubs 4-3. The Pirates rebounded from a three-game sweep at Milwaukee with nine hits in the opener of a four-game series at Chicago. Pittsburgh starter Bryse Wilson allowed Rafael Ortega’s leadoff single in the first, then walked three straight batters. Jonathan Villar added a sacrifice fly for a 2-0 lead, and Seiya Suzuki had an RBI groundout in the second for a 3-0 edge. Vogelbach homered in the third, and Tsutsugo’s double made it 4-3 Pirates in the fifth.

MLB – Cabrera aims at 3,000 in all-Venezuelan matchup
Miguel Cabrera tries again for his 3,000th career hit when the Detroit Tigers take on Colorado at Comerica Park on Friday night. The 39-year-old star needs one more hit to become the 33rd major leaguer to reach the milestone and the first from Venezuela to do it. Cabrera is set to face a fellow Venezuelan, Rockies pitcher Antonio Senzatela, in the series opener. Cabrera went 0 for 3, striking out twice, and stayed at 2,999 hits in a 3-0 win over the Yankees on Thursday. He drew an intentional walk in the eighth inning, prompting loud booing and chanting from Detroit fans.

NBA – Bucks’ Middleton out at least 2 weeks with knee injury
Milwaukee Bucks forward Khris Middleton is expected to miss at least two weeks after injuring his left knee Wednesday night in Game 2 of their first-round playoff series with the Chicago Bulls. The Bucks announced Thursday night that the three-time All-Star had undergone an MRI earlier that day and that they would offer their next status update on him in “approximately two weeks.” That likely knocks him out at least for the rest of the Bucks-Bulls series. Bucks coach Mike Budenholzer said after he Bucks’ 114-110 loss Wednesday that Middleton had a sprained medial collateral ligament.

Panthers 5, Red Wings 2 – Panthers beat Red Wings 5-2, clinch best record in East
Aleksander Barkov scored his 38th goal of the season and the Florida Panthers tied a franchise record with their 12th straight win, beating the Detroit Red Wings 5-2. Mason Marchment had a goal and an assist, and Sam Reinhart, MacKenzie Weegar and Noel Acciari also scored for the Panthers, who clinched first in the Atlantic Division and the top spot in the Eastern Conference. Florida, with 118 points, moved two points ahead of Colorado in the race for the best record in the NHL. Each team has five games remaining. Sergei Bobrovsky stopped 28 shots. Tyler Bertuzzi and Sam Gagner scored for Detroit, and Alex Nedeljkovic stopped 22 shots.

Kings 4, Blackhawks 1 – Kings defeat Blackhawks 4-1, move closer to a playoff spot
Phillip Danault scored for the fifth straight game and the Los Angeles Kings moved closer to wrapping up a playoff spot with a 4-1 victory over the Chicago Blackhawks. Danault opened the scoring in the first period with his 26th goal of the season. He is the first Kings player since Marián Gáborík in 2014 to have a goal in five straight games. Anze Kopitar, Andreas Athanasiou and Trevor Moore also scored for Los Angeles, which has won four of its last five. The Kings are five points ahead of Vegas for third place in the Pacific Division. Patrick Kane scored for Chicago, which has lost nine of its last 11. It was the 430th career goal for Kane, which moves him past Bill Guerin into sixth among U.S.-born skaters in NHL history.

Golf – Cantlay-Schauffele team leads in Louisiana
Patrick Cantlay and Xander Schauffele are the first-round leaders at the Zurich Classic near New Orleans.  Cantlay holed a 25-foot eagle putt early and chipped in from 40 feet for birdie late. Schauffele contributed six birdies of his own, and their three straight birdies to close gave them a 13-under 59 in fourballs.  It set a tournament record since the Zurich Classic switched to team play in 2017, and the Presidents Cup and Ryder Cup partners were willing to claim a piece of golf’s magic number. They had a one-shot lead over the team of Matthew NeSmith and Taylor Moore.

Boxing – Tyson punch on plane leads to investigation
Authorities have begun an investigation after former heavyweight champ Mike Tyson was recorded on video punching a fellow passenger on board a plane at San Francisco International Airport. The video was first shared by TMZ and shows Tyson leaning over the back of his seat repeatedly striking the unidentified man in the head, drawing blood. Prior to the physical altercation, the man is seen on the video standing over Tyson’s seat, waving his arms and talking animatedly while the former boxer sits quietly.

NASSAR – 13 Nassar victims seeking $130M from FBI over bungled probe
Thirteen sexual assault victims are seeking $10 million each from the FBI. They claim a bungled investigation by federal agents led to more abuse by the sports doctor. It’s an effort to make the government responsible for assaults that occurred after 2015. The Justice Department’s inspector general concluded last year that the FBI made fundamental errors when it became aware of allegations against Dr. Larry Nassar. He was a Michigan State University sports doctor as well as a doctor at USA Gymnastics.

FIFA – FedEx Field in Maryland drops out as 2026 World Cup site
FedEx Field in Landover, Maryland, has dropped out of bidding to host games at the 2026 World Cup, and the Washington area has merged its campaign with Baltimore’s M&T Bank Stadium. The joint bid would have a fan festival on the District of Columbia’s National Mall. Seventeen U.S. stadiums in 16 areas remain in the bidding for the World Cup, and three cities each in Canada and Mexico are bidding. The bid plan envisioned 16 total sites across the three nations, and FIFA targeted mid-June for announcing site selections.

NFL – Pro Football Hall of Fame expands opportunities for seniors
Senior candidates will have more opportunities to be selected for the Pro Football Hall of Fame in the next three years. The hall’s Board of Trustees has approved several changes to the bylaws governing the selection of Hall of Fame enshrinees. In the past, only one player who no longer was in the modern-era category could be voted into the shrine annually. But for the 2023-2025 classes, a maximum of three per year could be chosen by the selection committee. A deep backlog of senior candidates led to the revision.

NFL – Texas woman drops lawsuit claiming Jerry Jones is her father
A 25-year-old Texas woman who sued Dallas Cowboys owner Jerry Jones, alleging he is her biological father, has dropped her lawsuit. The Dallas Morning News reports that Alexandra Davis said in court papers filed Wednesday that she now wants genetic testing to verify her claim. Jones’ attorneys had asked in court filings that the suit be dismissed but did not address the paternity claim. The lawsuit alleged that Jones had a relationship with Davis’ mother, Cynthia Davis, who was working as a ticket counter agent for American Airlines in Little Rock, Arkansas, at the time. Alexandra Davis was born in 1996.

JUCO – Multiple players suspended after JUCO pitcher levels batter
The North Texas Junior College Athletic Conference has handed out a long list of suspensions after a pitcher leveled a batter after giving up a home run. Weatherford College pitcher Owen Woodward was suspended four games for the tackle. North Central Texas College hitter Josh Phillips was suspended two games because he was ejected for taunting. Online video showed Phillips rounding third and Woodward charging off the mound and smashing into him. Players from both teams charged onto the field. Weatherford officials have said Woodward could be expelled for his hit.