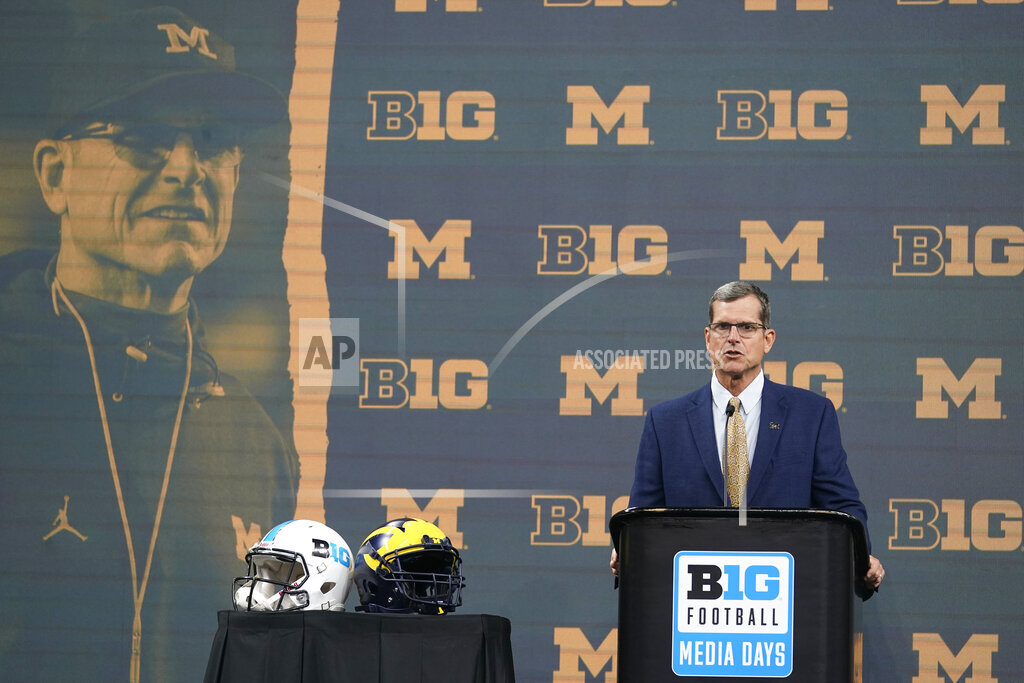 NCAA – Big Ten – AP sources: ESPN out of Big Ten TV rights negotiations
The Big Ten’s next television contracts will not include a deal with ESPN. Two people familiar with the negotiations told The Associated Press that the Big Ten was looking for a seven-year deal worth $380 million per year from ESPN, and the network declined. The people spoke to The AP on condition of anonymity because the negotiations were not being made public. Sports Business Journal first reported that ESPN was out of the Big Ten negotiations and CBS and NBC were likely to land pieces of the conference’s rights. ESPN has held television rights for the Big Ten since the mid-1980s. The network has shared Big Ten rights with Fox in the latest contract. Fox will remain the primary rights holder.

Royals 4, White Sox 2/White Sox 3, Royals 2 – Minus All-Star SS Anderson, White Sox split twinbill with KC
Lenyn Sosa hit his first major league home run and Yoan Moncada also connected as the Chicago White Sox, minus injured All-Star shortstop Tim Anderson, beat the Kansas City Royals 3-2 to split a doubleheader. The Royals won the first game 4-2. Vinnie Pasquantino homered in both games for Kansas City. Anderson is expected to miss six weeks with a tear in the middle finger of his left hand. He was put on the 10-day injured list between games of the twinbill. Anderson was injured on a check swing during his last at-bat on Saturday night at Texas. He will have surgery on Thursday in Chicago. The 29-year-old Anderson is hitting .301 for the playoff-contending White Sox. He missed the opener while finishing up a two-game suspension for making contact with an umpire.

Nationals 6, Cubs 5 – Meneses hits 2-run HR in 8th as Nationals beat Cubs 6-5
Joey Meneses hit a go-ahead two-run homer in the eighth inning, Keibert Ruiz went deep twice and the Washington Nationals regrouped after blowing a three-run lead, beating the Chicago Cubs 6-5 to snap a six-game losing streak. The Nationals were rolling along with a 4-1 lead, thanks to Ruiz’s solo drive in the second and three-run shot in the fourth against Marcus Stroman. Chicago scored four in the seventh to go up 5-4, capped by RBI singles by newcomer Franmil Reyes and Nico Hoerner against Kyle Finnegan. But the Nationals regrouped. Meneses came through against Mark Leiter Jr. in the eighth, after Maikel Franco singled with one out and Yadiel Hernandez struck out.

NBA – Kobe Bryant crash photos lawsuit to be heard by LA jury
Kobe Bryant’s widow is taking her lawsuit against the Los Angeles County sheriff’s and fire departments to a federal jury seeking compensation for photos deputies shared of the remains of the NBA star, his daughter and seven others killed in a helicopter crash in 2020. Jury selection begins in U.S. District Court on Wednesday in the invasion of privacy case. The county has argued that the photos, which were ordered deleted, have never been in the media, on the internet or otherwise publicly disseminated. Bryant is seeking unspecified millions because she fears the photos may eventually surface.

Storms 111, Sky 100 – Storm set WNBA record with 37 assists, beat Sky 111-100
Breanna Stewart had 25 points and nine rebounds, Gabby Williams added 21 points and seven assists, and the Seattle Storm set a WNBA record with 37 assists in a 111-100 victory over the Chicago Sky. Seattle also set a franchise record for scoring in any half with 66 first-half points, but the Storm only led by 11 points after Chicago closed on a 13-4 run. The 121 combined first-half points were the most in a first half this season in the WNBA. Seattle led by as many as 22 points in the second half and hit the century mark with 4:50 left in the fourth. Despite the loss, Chicago is still in the driver’s seat to earn the No. 1 seed in the playoff.

WNBA – Veteran emissary Richardson hopeful for Griner, Whelan swap
Bill Richardson, the former U.S. ambassador to the United Nations and a frequent emissary in hostage negotiations, says he’s hopeful about the chances of a two-for-two prisoner swap that could result in the release of WNBA star Brittney Griner and another jailed American, Paul Whelan. Richardson said in an interview with The Associated Press on Tuesday that in cases like this it’s “proportional.” Richardson traveled to Russia ahead of the release by Moscow of Marine veteran Trevor Reed in an April prisoner swap. He declined to discuss the current status of negotiations over Griner or Whelan or to explain what role he may be playing in the talks.

NFL – Bears star LB Smith requests trade after breakdown in talks
Chicago Bears star linebacker Roquan Smith is requesting a trade, saying the team hasn’t negotiated in good faith for a contract extension. Smith doesn’t have an agent. He wrote Tuesday in a statement that he has “officially” asked to be dealt and that it was “deeply painful.” He said he has been trying to negotiate an extension since April and accused the team of trying to take advantage of him. Smith was second-team All-Pro in 2020 and 2021. He is entering the fifth and final year of his rookie contract. General manager Ryan Poles says he will not honor the request and will try to negotiate a deal with him.

NFL – Goodell: NFL appeal of Watson suspension ‘right thing to do’
NFL Commissioner Roger Goodell says he feels the league needed to keep pushing for a year-long suspension for Cleveland Browns quarterback Deshaun Watson because of his “egregious” and “predatory behavior” toward women. Goodell was addressing the league’s decision to appeal a six-game suspension given to Watson by Sue L. Robinson, a former federal judge appointed by the NFL and NFL Players Association as an independent league disciplinary officer. Robinson found Watson violated the league’s conduct policy after he was accused by two dozen women of sexual assault or harassment while he played for Houston.

NFL/USFL – NFL teams tapping USFL veterans for help in training camp
Terrell Bonds owes his latest NFL opportunity to the revived USFL where he played 10 games this spring. He’s got lots of company as the NFL starts its first week of preseason games Thursday night. Bonds is among at least 41 players from the USFL’s inaugural season signed by 26 of the NFL’s 32 teams. Wide receiver has been the most popular position followed by cornerback as NFL teams look for help during training camps. Bonds is with the Tennessee Titans after playing in college at Tennessee State. He used to talk of playing for the Titans. Bonds says he’s thankful to see it actually come true.

Golf – PGA/LIV – Federal judge denies LIV golfers bid for PGA Tour postseason
A federal judge in California has ruled three golfers who joined Saudi-backed LIV Golf will not be able to compete in the PGA Tour’s postseason. U.S. District Judge Beth Labson Freeman made her decision in San Jose after attorneys for the sides each spoke about an hour. The golfers were seeking a temporary restraining order, which Freeman denied. Talor Gooch, Matt Jones and Hudson Swafford claimed they should be able to play where they want to. They are among 10 players who filed an antitrust lawsuit against the PGA Tour last week — including Phil Mickelson.

NHL – Rangers name defenseman Jacob Trouba captain
The New York Rangers have named defenseman and former Michigan Wolverine Jacob Trouba captain. Rangers president and general manager Chris Drury announced the selection in a news release and the team later held a news conference with Drury, Trouba and coach Gerard Gallant at their practice facility in Greenburgh, New York. Trouba has totaled 20 goals and 58 assists in 189 games over the last three seasons with the Rangers. The 28-year-old, an alternate captain the last two seasons, is the 28th captain in franchise history, and the first since Ryan McDonagh was traded in 2018. Trouba is one of three defensemen currently serving as captain in the NHL, joining Jared Spurgeon (Minnesota) and Roman Josi (Nashville).

Tennis – Serena Williams says ‘countdown has begun’ to retirement
Serena Williams says she is preparing to step away from tennis after winning 23 Grand Slam titles, turning her focus to having another child and her business interests. “I’m turning 41 this month, and something’s got to give,” Williams wrote in an essay released Tuesday by Vogue magazine. Williams said she does not like the word retirement and prefers to think of this stage of her life as “evolving away from tennis, toward other things that are important to me.” Williams is playing this week in Toronto, at a hard-court tournament that leads into the U.S. Open. The year’s last Grand Slam event begins in New York on Aug. 29.

Tennis – Serena Williams’ legacy involves plenty of wins, plenty else
Serena Williams is famous for her 23 Grand Slam singles titles. That is more than any other tennis player accumulated in the sport’s professional era. But mere numbers can’t capture everything Williams has represented during a distinguished career that began when she was a teenager in the 1990s and is remarkable for not just the successes but also the longevity, including a record 10 major championships after turning 30. What Williams has done without a racket in her hand is also rather noteworthy, whether it was her off-court interests or her stands on key issues in tennis and society at large.

LLWS – Beaned Little League batter rises to console upset pitcher
A Little League batter rose from a beaning to console the upset pitcher in a dramatic scene at a Little League regional tournament game in Waco, Texas. Pearland, Texas, righthander Kaiden Shelton was facing Tulsa, Oklahoma, batter Isaiah Jarvis Tuesday when an 0-2 pitch got away from him, striking Jarvis in the helmet. Jarvis fell to the ground clutching his head but was able after a few moments to take first base. Meanwhile, Shelton stood on the mound staring at the ground in tears until Jarvis walked to the mound and put his arms around Shelton to comfort him. The gesture drew a standing ovation.