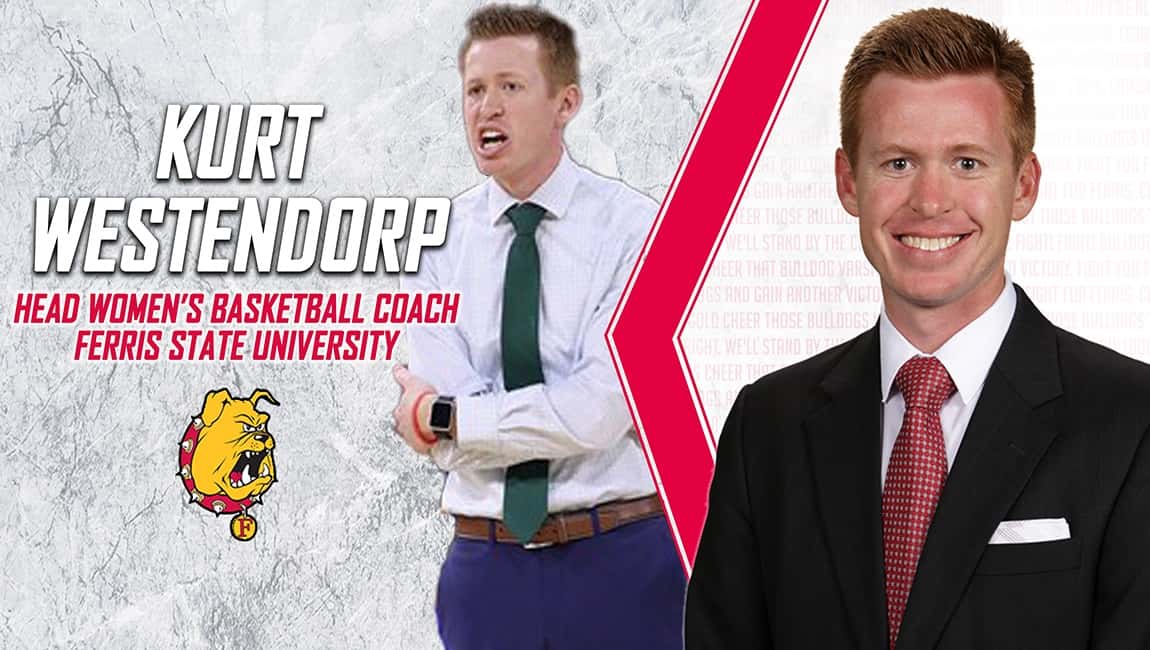 Big Rapids, Mich. – The Ferris State University women’s basketball program will look to build off its championship success of this past season under new leadership as Michigan native Kurt Westendorp was appointed as the Bulldogs’ head coach today in an announcement made by FSU Athletics Director Perk Weisenburger.

Westendorp, who previously served two years (2010-12) as the Bulldogs’ top assistant coach and has more than a decade of coaching experience on the collegiate level, returns to Ferris State to take over for former head coach Kendra Faustin. She departed to become the athletic director at Comstock Park High School after leading FSU to the school’s first NCAA Division II Tournament berth and GLIAC North Division Championship in eight years this past season.

Most recently, Westendorp has been the head coach the last four years at William Jessup University in Rocklin, Calif., building the program from the ground up into a successful national contender on the NAIA level following a four-year run as the associate head coach at NCAA Division I Valparaiso University. He becomes the Bulldogs’ eighth head coach in the 46-year history of the program and will officially begin his duties at FSU on June 10.

“Kurt was very impressive throughout our search process and we could not be more pleased that he has agreed to take over our program,” Weisenburger said. “He emerged from a deep and talented applicant pool and where he distinguished himself was his preparedness throughout the interview process, his connectivity to our student-athletes and staff, his experience as a former Ferris State assistant coach in this very program, his Michigan roots and diverse coaching experience at both the D1 & D2 levels as well as his success as a head coach in running his own program for the last four seasons.

“We have great optimism for our women’s basketball program going forward and Kurt is the ideal teacher/coach to build upon the foundation of success that Coach Faustin’s team established this past season,” he added.

During his four seasons at William Jessup, Westendorp quickly established the program on a regional level and elevated the Warriors to national recognition. They made the program’s first-ever NAIA Division I Tournament bid in 2019 along with also notching the school’s first national top 25 ranking. His final two teams at William Jessup posted back-to-back 20-win campaigns, setting school marks for wins in a season.

In his tenure at William Jessup, Westendorp mentored nine NAIA National Scholar-Athletes and the program earned NAIA Scholar Team status three consecutive years while also receiving the NAIA Champions of Character Team Award in 2017. The winningest coach in school history, he produced 64 wins in four seasons and the program set 42 school records in the stretch. He coached a pair of NAIA All-Americans in Miranda Zaragoza and Liz Gehweiler.

“It’s truly an honor to return to Ferris State University,” Westendorp said. “I would like to thank Perk Weisenburger for placing his trust in me to lead the program. This is a tremendous opportunity to bring my family home to Michigan and lead a program that has a special place in my heart.

“I’m excited to be joining an athletic department that has a championship culture and to build on the tremendous growth the women’s basketball program has shown in recent years,” he added. “I know firsthand the impact this program has on the student-athletes who invest their efforts into being the best at what they do. I’m looking forward to helping our current student-athletes leave a legacy that builds on the tradition of those who came before them.”

Before taking over at William Jessup, Westendorp spent four years as the associate head coach on the NCAA Division I level at Valparaiso under former Bulldog head coach Tracey Dorow. He was involved in all facets of the program, including playing a lead role in recruiting, player development, academic monitoring and more. The Crusaders competed against some of the country’s top Division I schools at the time such as Notre Dame, Duke, Louisville, Michigan and Illinois. They pulled off an upset of Big Ten Conference member Indiana in 2012-13 and he helped the program land the 2014 Horizon League Freshman of the Year in addition to a pair of Horizon League All-Freshman Team members in 2015 as part of the recruiting process.

Westendorp’s stint at Valparaiso followed two seasons as an assistant coach under Dorow at Ferris State from 2010-12. The Bulldogs set a school record with 23 wins in 2011-12 and won the GLIAC North Division Championship and reached the NCAA Division II Tournament, both of which were FSU’s most recent until this past season. The Bulldogs were ranked among the country’s top 25 teams and reached the regional semifinals in the NCAA Tournament his final year while also posting a 3-1 record against rival Grand Valley State during his two years on staff.

Previously, Westendorp served as the top assistant coach and head junior varsity coach at NCAA Division III Albion College from 2007-10 after working on the prep level at New Buffalo (Mich.) High School from 2005-07. He was also the head women’s golf coach at Albion for three years.

A Valparaiso graduate, Westendorp served as a student manager during his collegiate career for both the Crusaders’ men’s and women’s basketball squads from 2001-04, working under legendary Valpo head coach Homer Drew. While on staff, Valpo played in two NCAA Tournaments and won three Mid-Continent Conference Regular Season Championships.

Westendorp has been highly active on the professional level, serving as the NAIA-WBCA Coaches Committee President in 2018-19 following a year as the national first vice-president. He also participated in the Marine Corps Coaches Workshop in Quantico, Va., in 2018 and was a member of the William Jessup Warrior Golf Classic committee in addition to overseeing athletic department summer camps.

A product of Dowagiac Union High School, Westendorp graduated collegiately from Valparaiso in 2004 with a bachelor’s degree in political science (economics) and earned his master’s degree in 2006 in sports administration. He and his wife, Brittany, have a son, Kameron.

This past season, Ferris State claimed only its third-ever GLIAC North Division Championship as the Bulldogs compiled a 21-8 overall mark, which included a 15-5 record in the GLIAC. The Bulldogs drew the fifth seed for the NCAA Division II Midwest Regional Tournament and were slated to square off against rival Grand Valley State in their fifth-ever national tourney showing before the event was cancelled due to the COVID-19 virus. Overall, the program has made one of the league’s biggest turnarounds over the past three seasons, making three-straight league tourney appearances and registering 14 wins or more each campaign.

A total of eight letterwinners are eligible to return this coming season for the Bulldogs, who will also welcome the addition of a strong incoming recruiting class to help offset the departure of four seniors from this past year’s squad. This past season, both the Ferris State men’s and women’s basketball teams reached the NCAA Tournament in the same campaign for the first time in school history and both claimed GLIAC Championships.

What They Are Saying About Kurt Westendorp:

“Kurt was young and energetic when he worked for me and you could tell he had a bright future in coaching. I’m excited he has an opportunity to return to Ferris and believe he’ll do a fabulous job. It’s a win-win situation and a fantastic hire. Congratulations to the Bulldogs!”
– Homer Drew, former Valparaiso men’s basketball head coach

“I’m happy for Kurt and his family as they begin a new chapter and we’re behind them all the way. He’s a great teacher of the game who cares for his student-athletes and is a tireless worker. We’re grateful for what he did day in and day out at William Jessup. He brought stability, moved our program upward and displayed consistency. He will be sorely missed, but we understand this is a dream opportunity for him to return home, near his family and to a program he has previous ties with at Ferris State.”
– Lance Von Vogt, Athletic Director/Head Men’s Basketball Coach, William Jessup University

“It’s outstanding to be able to bring Kurt back home and the timing is perfect. He has an impressive coaching story and I look forward to working with him again as he returns to take over leadership of Bulldog women’s basketball.”
– Andy Bronkema, Head Men’s Basketball Coach, Ferris State University

“Coach Faustin rebuilt Ferris State women’s basketball to a championship level and Kurt Westendorp is just the coach to continue the culture and high level of basketball our student-athletes and fans expect. He is a tenaciously hard worker and his knowledge of the game will help the program continue to grow. Having worked next to Kurt during his time as an assistant at Ferris, I know he will be a leader the players can turn to throughout their careers and beyond.”
– Tia Brandel-Wilhelm, Head Volleyball Coach, Ferris State University