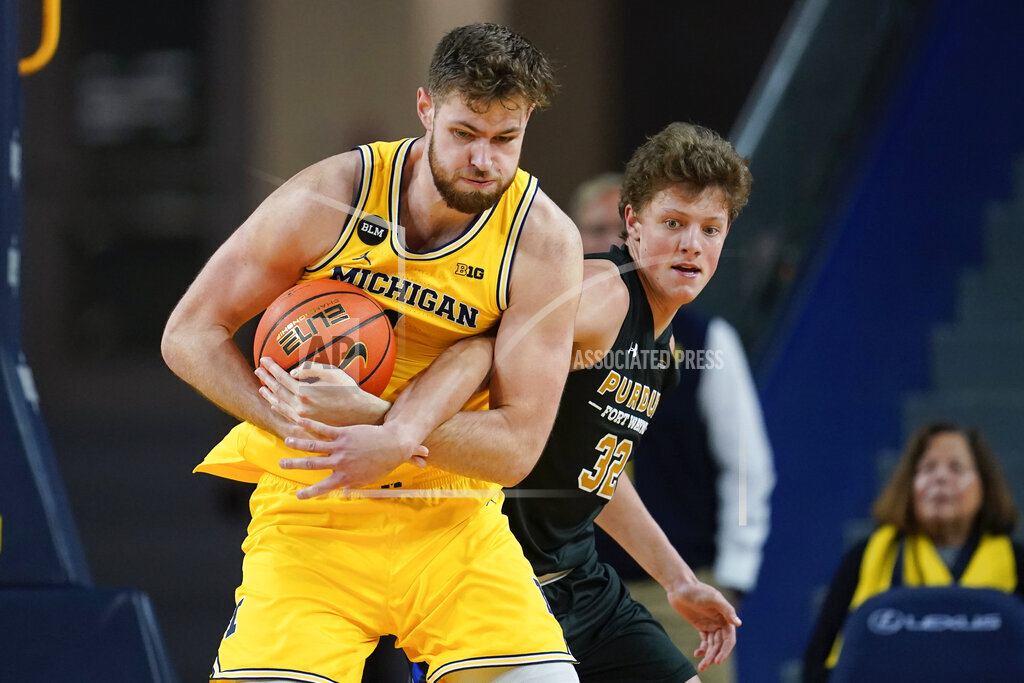 (22) Michigan 75, Purdue Fort Wayne 56 – No. 22 Michigan dominates Purdue Fort Wayne 75-56 in opener
Hunter Dickinson scored 22 points and grabbed 12 rebounds and freshman Jett Howard added 21 points Monday to power No. 22 Michigan to a 75-56 victory over Purdue Fort Wayne in the season opener for both schools. Dickinson who made nine of 11 field goals was no match for the Mastodons as he was able to score nearly every time he was near the basket and dominated the boards. Quinton Morton-Robertson scored 15 points and Bobby Planutis added 13 for the Mastodons, who were voted the preseason favorites to win the Horizon League title this season.

Minnesota 61, Western Michigan 60 – Transfers Garcia, Cooper help Minnesota top Western Michigan
Dawson Garcia scored 23 points, Ta’lon Cooper had 17 points, eight rebounds and 10 assists and Minnesota edged Western Michigan 61-60 in a season opener. Garcia made a 3-pointer, his third of the game, from the top of the key with 1:54 left to extend Minnesota’s lead to 59-50 and Taurus Samuels made 1 of 2 free throws with 20 seconds left to make it 61-54.

Ravens 27, Saints 13 – Drake, Houston lead Ravens past Saints for 3rd straight win
Kenyan Drake rushed for 93 yards and two touchdowns, Justin Houston had an interception to go with his third straight multiple-sack game, and the Baltimore Ravens beat the New Orleans Saints 27-13. Lamar Jackson passed for a touchdown and had 82 yards rushing. Baltimore won its third straight and remained atop the AFC North at 6-3, one game ahead of Cincinnati. The Saints fell to 3-6.  The Ravens converted 9 of 15 third downs.

NFL – Reich out, Saturday in as Colts try to fix stagnant offense
The Indianapolis Colts have hired former All-Pro center Jeff Saturday as interim coach after firing coach Frank Reich. The move came after another lackluster offensive performance in the team’s third consecutive loss. The Colts announced the moves one day after an ugly 26-3 loss at New England. Reich was hired in 2018 after serving as offensive coordinator for the Super Bowl-winning Philadelphia Eagles. He led the Colts to the playoffs in two of his first four seasons. Saturday’s only coaching experience came at a Georgia high school. He’s served as a team consultant and an ESPN commentator most recently.

Pistons 112, Thunder 102 – Bey scores 25, Pistons’ big 2nd half beats Thunder 112-103
Saddiq Bey scored 25 points, Cade Cunningham had 21 points and 11 rebounds, and the Detroit Pistons beat the Oklahoma City Thunder 112-103. The Pistons outscored the Thunder 64-40 in the second half. Rookie Jaden Ivey had 15 points and 11 rebounds, while Isaiah Stewart had 11 points and 12 rebounds. Shai Gilgeous-Alexander scored 33 points for the Thunder, but none of the other starters reached double figures.

Bulls 111, Raptors 97 – Zach LaVine’s 30 points pace Bulls past Raptors 111-97
Zach LaVine scored a season-high 30 points as the Chicago Bulls coasted to a 111-97 victory over the Toronto Raptors on Monday night. LaVine, who didn’t play in Sunday’s nine-point loss at Toronto because of injury management on his knee, scored the Bulls’ first nine points of the fourth quarter before committing his fifth foul with seven minutes, 26 seconds left. But the Bulls held a 15-point lead and were able to cruise the rest of the way.. They improved to 2-2 in four series of back-to-back games. Bulls center Nikola Vucevic recorded his fourth consecutive double-double with 15 points and 13 rebounds. Guard Fred VanVleet led the Raptors with 27 points.

Pacers 129, Pelicans 122 – Turner has 37 points, 12 rebounds, Pacers beat Pelicans
Myles Turner had season highs of 37 points and 12 rebounds, and the Indiana Pacers beat the New Orleans Pelicans 129-122 for their fourth win in five games. Tyrese Haliburton added 20 points and 13 assists for the Pacers, making six 3-pointers. Buddy Hield had 20 points with five 3-pointers. Jalen Smith added 15 points and 11 rebounds. The Pacers made 22 3-pointers, seventh-most in franchise history, compared to the Pelicans’ 14. Brandon Ingram scored 29 points and Zion Williamson had 26 for the Pelicans, who like the Pacers are 5-5 but have lost two in a row.

MLB – Fans celebrate Houston Astros’ World Series win with parade
An estimated more than 1 million fans celebrated the Houston Astros’ World Series win with a downtown parade. The parade Monday afternoon took place without any serious incidents, except for the arrest of a 33-year-old man. He was accused by Houston police of throwing a beer can at U.S. Sen. Ted Cruz, who was riding in the back of a truck that was part of the parade. The Astros clinched their second World Series title in six seasons Saturday, beating the Philadelphia Phillies 4-1 in Game 6. Officials say the number of people at the parade was expected to surpass the 1 million individuals who attended the parade held after the Astros won their first World Series in 2017.

FIFA – World Cup ’22 – Qatar’s promise of ‘carbon-neutral’ World Cup raises doubts
Qatar has been on a ferocious construction spree that has few recent parallels in the long run-up to hosting the 2022 men’s World Cup soccer tournament. It built seven of its eight stadiums, a new metro system, highways, high-rises and Lusail, a futuristic city that ten years ago was mostly dust and sand. Qatar promised something else to distinguish this World Cup from others in the past: It would be ‘carbon-neutral,’ meaning it would have no impact on the climate. But outside experts say Qatar and FIFA’s plan rests on convenient accounting and projects that won’t counteract the event’s carbon footprint.

Swimming – Ledecky posts world record in 800 free at World Cup meet
Katie Ledecky swam to a world record of 7 minutes, 57.42 seconds in the 800-meter freestyle in a World Cup meet. The previous record of 7:59.34 by Spain’s Mireia Belmonte had stood since 2013. Indianapolis is one of three stops on the World Cup circuit organized by FINA, the world governing body for aquatic sports. The previous two were at Berlin and Toronto. The 25-year-old Ledecky won by nearly 10 seconds over silver medalist Summer McIntosh, a 16-year-old Canadian.