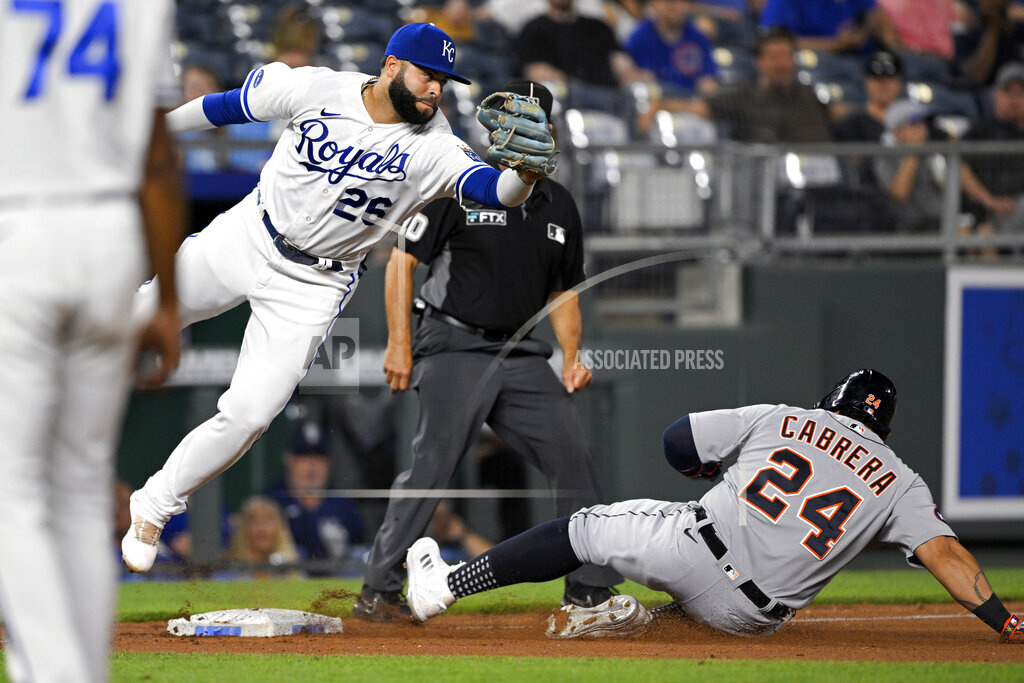 Tigers 7, Royals 5 – Cabrera drives in 2 to tie Williams, Tigers beat Royals 7-5
Miguel Cabrera drove in the tying and go-ahead runs, matching Ted Williams for 14th place on the career RBI list, and the Detroit Tigers rallied past the Kansas City Royals 7-5 to snap a four-game skid. Cabrera’s sacrifice fly in the fifth inning made it 3-3, and he had an RBI grounder for the Tigers’ first run in a four-run seventh. He equaled Williams with 1,838 RBIs. Later in the seventh, Cabrera stole third and scored on a wild throw. It was just his second stolen base in the past seven seasons. The Royals committed four errors as their three-game winning streak ended.

Guardians 4, White Sox 1 & White Sox 7, Guardians 0 – Cease strikes out nine, White Sox split DH with Guardians
Dylan Cease struck out nine in 5 2/3 innings, and the Chicago White Sox beat the Cleveland Guardians 7-0 for a doubleheader split. José Abreu, Luis Robert and Josh Harrison homered for Chicago, which had dropped four of six before its sorely needed victory in the nightcap. Cease allowed five hits and walked three. In the opener, Shane Bieber tossed a three-hitter for his first complete game of the season, leading Cleveland to a a 4-1 victory. José Ramírez and Amed Rosario each drove in two runs.

Orioles 4, Cubs 2 – Urías stars as Orioles beat Cubs 4-2 for 9th straight win
Ramón Urías hit a two-run homer and made a big defensive play, and the Baltimore Orioles beat the Chicago Cubs 4-2 for their ninth straight victory. Jorge Mateo also homered as Baltimore reached .500 for the first time this season. It’s the longest win streak for the Orioles since the franchise won 13 straight in September 1999. Baltimore right-hander Jordan Lyles pitched seven innings of two-run ball in his second straight win. All-Star Ian Happ homered for Chicago, which dropped its fifth in a row.

MLB – MLB testing modified "pie slice" infield shift ban in minors
The Florida State League will limit defensive shifts by drawing chalk lines in a pie shape from second base to the outfield grass starting July 22, prohibiting infielders from the marked area pre-pitch in an experiment that could increase offense. Major League Baseball has been testing shift limits all season at Double-A and Class A, requiring teams to have four players on the infield, including two on each side of second base. The experiment in the Class A FSL was first reported by The Athletic and confirmed by MLB.

Sky 99, Dream 75 – Parker scores 31, Copper adds 23 as Sky beat Dream 90-75
Candace Parker had 31 points and 11 rebounds, Kahleah Copper scored 23 points on 9-of-14 shooting and the Chicago Sky pulled away in the fourth quarter to beat the Atlanta Dream 90-75. Emma Meesseman added 10 points, six rebounds and a season-high eight assists for Chicago (17-6). Aari McDonald hit a 3-pointer that gave the Dream a 70-65 lead with 7:50 to play, but Chicago scored the next 15 points. Atlanta went scoreless for nearly five minutes and the Sky never trailed again. Meesseman either scored or assisted on 18 of Chicago’s 30 fourth-quarter points.

WNBA – LeBron critical on his show of US efforts to get Griner home
LeBron James is publicly criticizing the United States’ handling of WNBA All-Star Brittney Griner’s case in a trailer for an upcoming episode of his television show: “The Shop: Uninterrupted.” Griner is on trial in Russia for drug possession. She pleaded guilty last week and will appear again in court on Thursday. James tweeted Tuesday night that his comments in the trailer weren’t intended to be critical of the U.S. efforts to get Griner back. It’s unclear when the show was filmed, although in the trailer it’s mentioned she had been in Russia for over 110 days which would be roughly five weeks ago.

NBA – NBA stiffens take foul penalty, will keep play-in tournament
The NBA has completed the process of changing the transition take foul rule, ending years of discussion about what to do with the long-maligned tactic. And the play-in tournament is going to be around for the foreseeable future. The league’s board of governors finalized those two matters Tuesday by approving a plan to award one free throw when teams are disadvantaged by the take foul. They also removed the “experimental” designation from the play-in element to the postseason.

NHL – Scotty Bowman moves on from job as Blackhawks adviser
Scotty Bowman says he no longer works for the Chicago Blackhawks. The Hockey Hall of Famer who won the Stanley Cup nine times as a coach had been a senior hockey operations adviser since 2008. The 88-year-old says it is time to move on but he is not ready to retire just yet. Bowman’s son Stan resigned as general manager in October after an investigation into the team’s mishandling of sexual assault allegations against an assistant coach by a player revealed he knew about the situation. Scotty says he left the team on good terms after what he called a pretty uncomfortable year.

NHL – Duncan Keith announces retirement after 17 NHL seasons
Duncan Keith is retiring after 17 seasons in the NHL, three Stanley Cups and two Norris Trophy awards as the league’s top defenseman. He spent 16 seasons with the Chicago Blackhawks and joined Edmonton last season. Keith will turn 39 on Saturday, and said there’s a noticeable change in how he’s felt in recent postseasons. That, coupled with the desire to spend more time with his son Colton, helped him reach a difficult decision. Keith finished his career with 106 goals, 540 assists and 675 penalty minutes over 1,256 games. He also helped Canada win Olympic gold at the 2010 and 2014 Winter Games and played two years of college hockey at Michigan State.

NHL – Gaudreau leaving Flames, joins deep NHL free agent class
Johnny Gaudreau told the Calgary Flames he’s leaving to test NHL free agency. He’s likely to receive the biggest contract handed out when the market opens Wednesday. Colorado Avalanche Stanley Cup champions Nazem Kadri and Darcy Kuemper, and Dallas Stars defenseman John Klingberg are also part of a deep class with the most high-end talent available in several years. Evgeni Malkin is not after re-signing with the Pittsburgh Penguins for $24.4 million over four years. There’s significant money to spend with the salary cap going up slightly in the first increase in three years. And some teams have already made moves to free up more cap space to go shopping.

Golf – British Open returns to home of golf at St. Andrews
Golf’s oldest championship returns to the home of golf. There’s always something special about a British Open at St. Andrews. This one rises to an even greater occasion as the 150th edition. Tiger Woods is playing his third major of the year. Xander Schauffele is coming off his second straight win. Rory McIlroy tries to end eight years without a major. All the elements are in place. Elsewhere, the PGA Tour stages its only modified Stableford scoring tournament in Lake Tahoe. The LPGA Tour has its only official team event in Michigan. But it’s all about St. Andrews this week.

Golf – Tiger Woods unsure how many Opens he has left at St. Andrews
Tiger Woods will be crossing the Swilcan Bridge for the last time at some point this week at St. Andrews. He just doesn’t know if it will be the last time this year or forever. Woods doesn’t know how many British Opens he has left at the home of golf. All that matters is playing this one. That explains why he has walked more holes ahead of the opening round than the previous two majors combined. Woods is a two-time Open champion at St. Andrews. Winning another is a tall order. He has played only seven competitive rounds this year.

NCAABSB – Notre Dame hires VCU’s Shawn Stiffler as new baseball coach
Shawn Stiffler is the new baseball coach at Notre Dame. The Irish hired Stiffler away from VCU to replace Link Jarrett. Jarrett took the Florida State job after leading Notre Dame to the College World Series. Stiffler was 340-198 in 10 seasons at VCU. The Rams reached their first NCAA super regional in 2015 and made regional appearances in 2021 and 2022. Stiffler takes over a program that went 41-17 for its first 40-win season since 2006. The Irish beat No. 1 national seed Tennessee in super regionals and went 1-2 in its first CWS appearance since 2002.

NFL – Judge says blood test results can be used in Ruggs’ DUI case
A judge has ruled that results of a blood-alcohol test taken from former Las Vegas Raiders wide receiver Henry Ruggs III can be used as evidence in his DUI crash case. Authorities say the 23-year-old Ruggs allegedly was driving 156 mph just before the fiery November 2021 crash that left a woman dead. Prosecutors say Ruggs’ blood alcohol level after the crash in Las Vegas was 0.16%, which is twice the legal limit for drivers in Nevada. Ruggs could be sentenced to more than 50 years in prison if he’s convicted of all four felony charges in the case. A preliminary hearing is scheduled for Sept. 7.

NFL – House committee accepts Snyder’s offer to testify virtually
The U.S. House Committee on Oversight and Reform has accepted an offer for Washington Commanders owner Dan Snyder to testify virtually July 28. Chairwoman Carolyn B. Maloney wrote a letter to attorney Karen Patton Seymour saying Snyder would be allowed to testify via Zoom under the conditions set out by the committee’s initial subpoena. The committee is set to give Snyder access to exhibitions used in prior depositions and interview transcripts as well as descriptions of redacted information. Snyder refused to testify when first invited along with NFL Commissioner Roger Goodell. His camp has until Wednesday at noon EDT to confirm Snyder will appear before the committee.