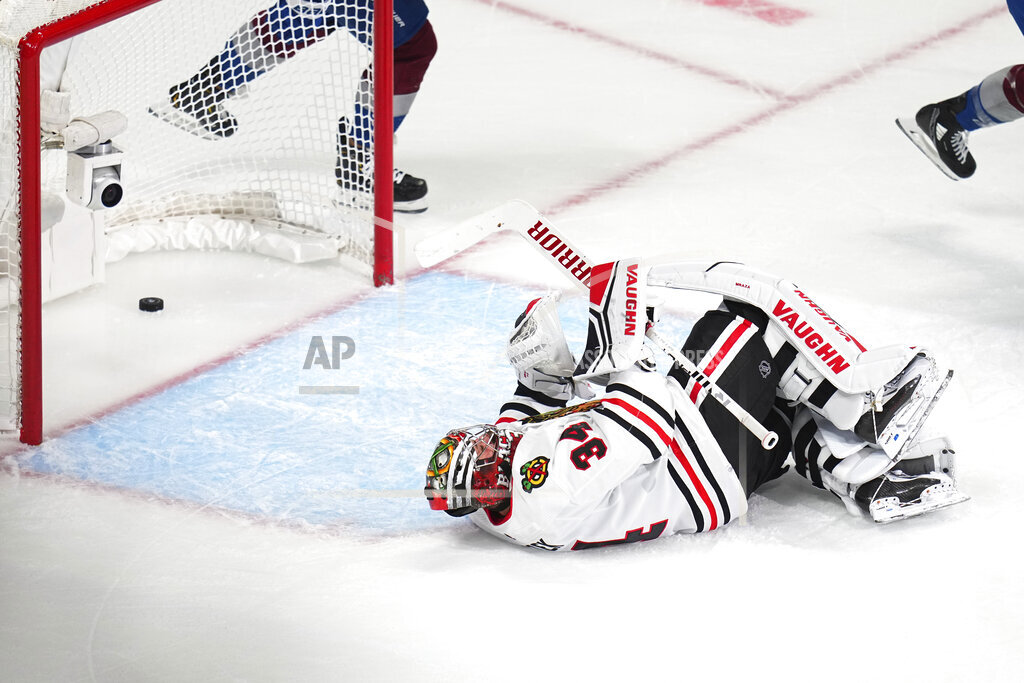 Avalanche 5, Blackhawks 2 – Avs raise banner, beat Blackhawks 5-2 to start title defense
Artturi Lehkonen and Valeri Nichushkin each scored two power-play goals, Mikko Rantanen had four assists and the fast-skating Colorado Avalanche began their Stanley Cup title defense with a 5-2 win over the Chicago Blackhawks. Shortly after raising their newest banner to the rafters, the Avalanche went to work. Andrew Cogliano scored Colorado’s first goal of the season, the only goal in the game that wasn’t on the power play. Nathan MacKinnon, fresh off a new lucrative contract, contributed two assists, while new goaltender Alexandar Georgiev stopped 15 shots. Jonathan Toews and Max Domi had goals as Luke Richardson made his coaching debut for the Blackhawks.

NFL – Fields, Bears try to build on progress when Commanders visit
Chicago quarterback Justin Fields finally showed signs of progress by delivering his best performance this season, and the Bears staged a big comeback, only to come up short in the closing minutes. They hope those promising steps continue when they host the struggling Washington Commanders in a Thursday night matchup. Fields set career highs in completion rate and passer rating in a 29-22 loss at Minnesota on Sunday. The former Ohio State star was 15 of 21 for a season-best 208 yards and a touchdown. The Commanders come in with four straight losses since holding on to beat Jacksonville in their season opener. Tennessee beat them 21-17 last week.

NFL – Raiders’ Davante Adams charged for shoving photographer
Las Vegas Raiders receiver Davante Adams has been charged with misdemeanor assault for shoving a photographer to the ground as he left the field following a loss at Kansas City. Kansas City, Missouri, police said Adams pushed Ryan Zebley to the ground while running off the field following the Raiders’ 30-29 loss to the Chiefs at Arrowhead Stadium on Monday night. Police called it an “intentional, overt act” that caused whiplash, a headache and a possible minor concussion. Adams apologized in his postgame comments to the media and later on Twitter.

Braves 3, Phillies 0 – Wright outduels Wheeler, Braves blank Phils 3-0 to even NLDS
Kyle Wright threw six brilliant innings to outduel Zack Wheeler, and the Atlanta Braves evened their NLDS at one game apiece with a 3-0 victory over the Philadelphia Phillies. After rain delayed the first pitch by nearly three hours, Wright surrendered just two hits. He claimed the win when the Braves got to Wheeler for three runs in their half of the sixth. This was a game the reigning World Series champions had to have after losing the best-of-five series opener, 7-6. They had the right guy on the mound. Wright led the majors with 21 wins during the regular season.

Padres 5, Dodgers 3 – Padres pull out 5-3 victory over Dodgers, tie NLDS 1-all
Manny Machado homered early and added an RBI double off Clayton Kershaw, and Jurickson Profar singled home the go-ahead run in the sixth inning as the San Diego Padres beat the Los Angeles Dodgers 5-3 to even their NL Division Series at a game apiece. Freddie Freeman, Max Muncy and Trea Turner went deep for the Dodgers, but LA couldn’t come up with its usual clutch hitting despite numerous chances. The best-of-five series shifts to San Diego for Game 3 on Friday.

NBA – Pistons C Marvin Bagley III out 3-4 weeks with knee injury
Detroit Pistons center Marvin Bagley III is expected to be out of the lineup for three to four weeks with an injured right knee. Bagley was hurt Tuesday night in a preseason game against Oklahoma and an MRI showed a sprained knee ligament and bone bruise. The 6-foot-11 Bagley signed a three-year, $37 million contract as a restricted free agent in July with the Pistons. Detroit acquired him from Sacramento in a four-team trade last season. Bagley bounced back from a disappointing, injury-filled stint with the Kings to average 14.6 points in 18 games with the Pistons last season.

NCAAFB – Badgers, Spartans try to salvage seasons that have gone awry
Call it the Big Ten’s midseason “Disappointment Bowl.” Michigan State was 15th and Wisconsin 18th in the preseason AP Top 25. Neither team has a winning record as they prepare to face off Saturday at East Lansing. Wisconsin already has made a coaching change. Wisconsin had gone 0-3 against Power Five opponents before winning 42-7 at Northwestern last week. Michigan State is in even worse shape. The Spartans have followed lopsided victories over Western Michigan and Akron by losing four straight games by an average margin of 20.3 points.

NCAAMBKB – Big Ten – Next wave of Big Ten stars primed to shine after many exits
Only eight of the top 25 scorers in the Big Ten from last season returned to their teams. The conference had three of the top 10 picks in the NBA draft last summer. The natural question for Iowa is who the next standout will be after the departure of Keegan Murray to the NBA. Kris Murray is getting plenty of attention because he’s his identical twin brother. Iowa takes a developmental approach and leans more on existing players in the program to fill those voids. Michigan State follows that philosophy, too. Spartans coach Tom Izzo did not pursue any transfers.

NCAAMBKB – ACC – ACC Commisioner Phillips: Time to expand NCAA’s Big Dance
ACC Commissioner Jim Phillips thinks its time to expand the NCAA Tournament. He’s not sure about how many teams or how to make it work within the framework of March Madness. But he’s hopeful that more programs can get in the Big Dance sooner rather than later. Phillips is a proponent of expanding all NCAA championships so more athletes can take part. Notre Dame coach Mike Brey would like to see three more First Fours so all four regionals would have a four-team pod.

Division 2 at Wayland (first round at local sites)
Wayland 4, Otsego 3

Division 4 at Hartford (first round at local sites)
Saugatuck at Bangor, 5:30 p.m.