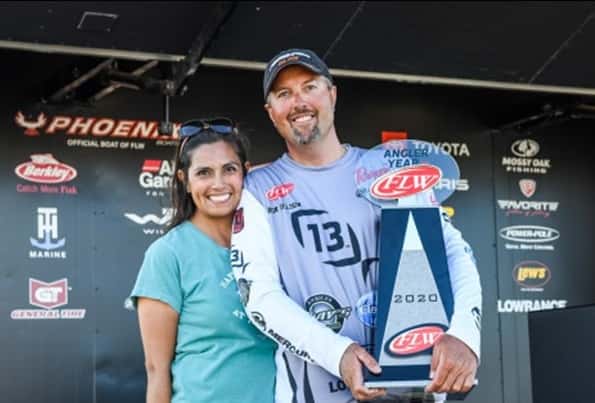 Pro angler Ron Nelson of Berrien Springs, Michigan, the 2019 Polaris Rookie of the Year, clinched the 2020 FLW Angler of the Year title Wednesday August 12th, bringing a 73-point lead into the event. Nelson will receive his entry fees paid for the entire 2021 Tackle Warehouse Pro Circuit season (approx. $30,000.) for his win. Likewise, he was eligible for the Ranger Cup, open only to Ranger boat owners earning him an additional $25,000. Nelson also won the $500 Berkley Big Bass award in the pro division after bringing a 6-pound largemouth to the scale.

Now, with the AOY win under his belt, he’s cemented himself as one of the hottest and best anglers in the country, but he’s not going to be taking a break anytime soon. “I feel like it hasn’t sunk in yet,” says Nelson. I probably won’t be able to think about it or embrace the moment until this tournament season is over. For Nelson, a couple moments stand out as marking posts along his career path. One happened just days ago when he broke down on day three at the Mississippi River, effectively costing himself a chance to win his first Pro Circuit event. Another happened the first day of his pro career in 2019, when Nelson weighed zero bass on day one at Sam Rayburn.

“Last year I had two goals in mind: I wanted to be in contention for Angler of the Year and I wanted to be in contention for Rookie of the Year,” says Nelson, thinking back to Sam Rayburn. “I’m usually really levelheaded out there, but after some mechanical issues the first day, I hit the panic button. I had the easiest fish to catch, and I just messed up. I went back out next day and caught ‘em, but I knew Angler of the Year was gone. “I was determined to work hard, regardless of that first day of the tournament, and at the end of the year, I had missed opportunities, but it worked out. I always say the good Lord provides what you need, not what you want, and it worked out.” This year, things worked out more often than not, and Nelson went into the last event at Lake Erie with a big lead. Running all the way to the mouth of the Detroit River each day, Nelson managed mixed bags to close down the AOY title.

“It’s absolutely my biggest title to date,” says Nelson. “But, there’s something special about winning Rookie of the Year. You truly only have one chance to win that title, and it got the momentum going under me a little bit. This will light a fire under my tail even more, so I’m gonna want another one. All you can ask is to be in contention for anything, this year was a year of challenges, with all the changes and scheduling. This year, I felt like I did my job, and the good Lord blessed me to stay consistent.” Though he’s got a Michigan address, Nelson stands out as extraordinarily consistent across the country. That, plus his strong suits of smallmouth and sight-fishing have kept him a top contender. But he’s not done yet. Ron’s final destination this season is the 2020 Tackle Warehouse Pro Circuit title presented by Toyota on Sturgeon Bay August 24-20. Fifty of the world’s best anglers will compete for the $200,000 top prize and the chance to hoist overhead the most prestigious trophy in professional bass fishing. Unlike traditional Tackle Warehouse Pro Circuit events, the Tackle Warehouse TITLE will showcase anglers competing using the Major League Fishing catch, weigh and immediately release format. “I’m excited,” says Nelson of the coming smallmouth smashfest. The new format will be fun, it’ll be different, but I’m really looking forward to it.”

Ron resides in Berrien Springs with his wife Karla and their two canine babies Annie and Sophie. Aside from the unwavering support of his wife, Ron attributes his successes to the generosity of his sponsors; Ranger Boats, Mercury Outboard Motors, PowerPole, Lowrance, TrickStep, MillerTech Lithium Batteries, and 13 Fishing.