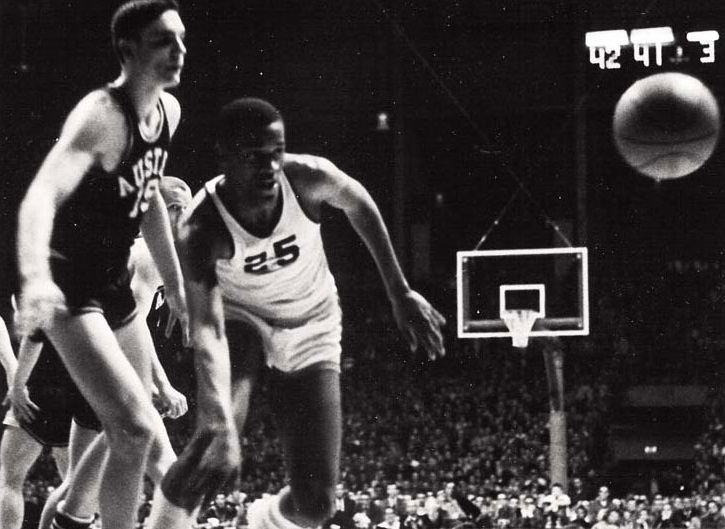 This summer, the Michigan High School athletic Association will be giving fans a chance to relive, or learn about, some of the classic basketball state championship games from the late 1940’s through the mid 1970’s in their “Hoops On Film Series” at www.mhsaa.tv.

The series will consist of film clips from some of the state’s most memorable title match-ups from that era.  Instalments in the series will range in length from ten minutes to almost an hour.

Starting this Monday (June. 22), each of the next ten weeks will highlight a different championship classic, including Benton Harbor’s 1958 clash with Detroit Austin.  That Class A Boys’ Final will be featured the week of July 20.

The complete schedule is…

Week of June 22 – Detroit East Catholic 50, Saginaw St. Stephen 49 – 1973 Class C Boys Final – With four ticks remaining on the clock, Larry Merchant’s 18-foot jumper from left of the key gave underdog Detroit East Catholic a 50-49 win over top-ranked Saginaw St. Stephen in Class C. Merchant, who scored 10 of his 14 points in the first half, gave the Chargers a 48-47 lead with just over a minute to play, but a pair of free throws by Elijah Coates pushed St. Stephen out front 49-48 with 45 seconds left.

Week of June 29 – Muskegon Heights 43, Flint Northern 41 (OT) – 1954 Class A Boys Final – After three visits to the MHSAA Semifinals, Muskegon Heights grabbed its first-ever title with a 43-41 overtime win over Flint Northern at Jenison Field House in East Lansing in Class A. Tied at 41 at the end of regulation, the Vikings opted to hold the ball for nearly three minutes of the extra period, after the Tigers missed two shots following the opening tip-off. But as Viking guard Bob Failing drove in for the final shot, he was called for a charging foul. Under the rules of the time, Murt Johnson of the Heights stepped to the line, and calmly sank two free throws for the only points of OT. Future University of Michigan star M.C. Burton scored 22 points to pace the Heights.

Week of July 6 – Flint Northern 79, Detroit Kettering 78 – 1971 Class A Boys Final – After downing to pranked Pontiac Central and prep All-American Campy Russell in the semifinals one week earlier, Detroit Kettering fell victim to Flint Northern, 79-78, in the Class A title game at University of Michigan’s Crisler Arena. Just five weeks previous to the title contest, Pontiac Central had demolished Northern by 33 points.   Led by Coach Bill Frieder and a solid 2- 3 zone defense, Northern went to work on shutting down Kettering’s own prep phenomenon, Lindsey Hairston. Despite the absence of all-state forward Tom McGill, who was forced to the bench with four fouls, Vikings ended the third stanza with eight quick points and a 56-49 lead. Hairston erupted for 11 fourth-quarter points to pull Kettering within two, 75-73, with 1:44 to go. However, a pair of free throws by Rick Jones and one by Tom Jackson in the final seconds of the game sealed the win for Northern. It was the school’s first title since 1947. Hairston ended with 21 points.  Wayman Britt led Northern with 18 points and 19 rebounds.

Week of July 20 – Detroit Austin 71, Benton Harbor 68 – 1958 Class A Boys Final – Benton Harbor clung to a slim 49-48 lead after three periods of play, but Detroit Austin Catholic’s Dave DeBusschere scored five field goals in the first five minutes of the fourth quarter to lead his team to a 71-68 victory over the Tigers in Class A.  DeBusschere finished with 32 points. Dominant in their respective areas of the state, the schools were favorites to meet in the finals. The game marked Benton Harbor’s second straight appearance in the championships, while Austin was only in its third year as a four-year high school. Chet Walker, who finished with 25 points for the Tigers, would go on to a distinguished career with Bradley University and the Chicago Bulls.   DeBusschere went on to play for the University of Detroit, the Detroit Pistons and the New York Knicks.

Week of July 27 – Marquette Pierce 68, Freesoli 61 – 1961 Class D Boys Final – After 35 years as a coach in the Upper Peninsula, Vic Hurst was rewarded with his first MHSAA title as Marquette Pierce downed a determined Freesoil squad, 68- 61, in a Class D battle of the undefeated. Dave Benson led the Warriors with 17 points, while teammates Dennis DeMerse and the Laurich brothers – Conrad and Larry – each added 15.

Week of Aug. 3 – Flint Holy Redeemer 62, Kingsley 60 – 1970 Class D Boys Final – Celebration was tinged with sadness for Flint Holy Redeemer fans in Class D.  A victim of consolidation, the Flyers went out in their final season with a bang, downing Kingsley, 62-60. Bob Hooks emerged as the hero, nailing a 25-foot bucket from near the top of the key as time expired.  Holy Redeemer was one of the Flint area parochial schools closed to create Flint Powers Catholic. Redeemer ended with a 22-2 mark.

Week of Aug. 10 – DeWitt 51, Carrollton 36 – 1977 Class C Girls Final – Plagued early by fouls, Saginaw Carrollton bowed to DeWitt, 51-36, in the Class C contest. DeWitt hit six free throws and jumped out to a 16-8 lead in the first quarter of play as a pair of Cavalier starters were forced to the bench with foul trouble. The Panthers never looked back. Sophomore Kelly Robinson led the winners with 21 points and 15 rebounds, including nine-of-12 shooting from the free-throw line. Freshman Laura Collison scored 11 for the Cavaliers.

Week of Aug. 17 – Lansing Sexton 80, Hamtramck 79 (OT) – 1959 Class A Boys Final – It has since become known as “The Shot.” Described by “The Swami” – Detroit Free Press prep writer Hal Schram – as “a crazy heave that bounced twice on the rim before dropping through the laces,” it was the “the windup to a wild finish that gave Lansing Sexton an 80-79 overtime win over Hamtramck.” Many of the 12,120 fans that packed Jenison Field House for the Class A contest had left the arena early as the Cosmos opened up a 17-point lead, 43-26, at the half and controlled the contest 72-57 lead midway through the final period. However, much to everyone’s amazement, Sexton notched the game’s final 15 points in the last 3:15 of regulation knotting the game at 72 and sending it to overtime. “The Shot” by Sexton’s Bob Davis as time ran out in extra period erased a 79-78 Hamtramck lead. The horn sounded while the shot was in the air, and according to those in attendance, the ball seemed to bounce on the rim for an eternity before finally falling in.

Week of Aug. 24 – River Rouge 65, Muskegon Heights 64 – 1972 Class B Boys Final – After 16 appearances and 11 titles by River Rouge and Greene, the Class B crown had, in the words of Detroit writer Joe Falls, “become almost their divine right each March.” Muskegon Heights had lost to Rouge in the Final one year earlier, but it appeared that the Tigers had finally turned the tables on the perennial powerhouse. Leading 64-57 with only 58 seconds remaining on the clock at Jenison Field House, this game appeared to be over. But, in perhaps the most amazing comeback in tournament history, the turnaround started with 45 seconds remaining.  Ralph Perry’s easy lay-up cut the Heights margin to five points. Fouled on the play, Perry missed the free throw, but teammate Byron Wilson pounded home the rebound and the Panthers trailed by three. An errant inbound pass kept the dream alive. Leighton Moulton sank a 22-foot jumper with 23 seconds remaining, and the Panthers trailed by a point, 64-63. The Tigers were called for traveling on the change of possession and Rouge had its chance. Moulton, the leading scorer in the contest, was again called upon. He drove toward the basket and was fouled before the shot. “The clock read: 0:02. If Moulton missed the first, it would have been all over,” wrote Falls, capturing the scene in characteristic clarity. “All of it rested on his lean, lithe shoulders…and the delicate touch in his finger. He stepped to the line while the crowd quieted. The pressure was immense. Moulton looked up, let it go-and swish. Now utter bedlam. Moulton broke toward the center of the court, thrusting his fist into the air. He jumped and danced and was mobbed by his teammates…He’d tied it. Rouge could do no worse than go into overtime. But now he had another chance,” continued Falls, “the chance to win it. He made the most of it by dropping in his second free throw…That’s when the tears started coming out of Lofton Greene’s eyes, if you can imagine that.”

To view highlights of the Benton Harbor vs. Detroit Austin tilt, and the rest of the schedule, go to www.mhsaa.tv starting this Monday, June 22.

The MHSAA is in search of film of other state championship classics.  Anyone in possession of such a film is encouraged to contact John Johnson at the MHSAA Office (john@mhsaa.com) to discuss having the film converted to a digital format.